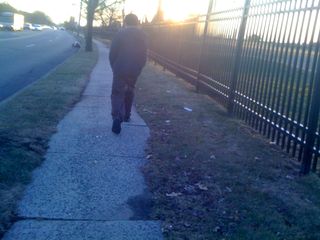 Charlie woke up at 3.45am on Thursday. He did take himself back to bed around 5am after he'd gotten something to eat (i.e., an incredibly early breakfast) and we'd used the computer. But he didn't go back to sleep. By 6.30 he'd had enough of waiting around to get in the white car and a brief neurological storm (real brief) ensued which Jim and I had been semi-anticipating. Charlie knew it was very early but he still has the routine of "time to wake up/get in the car/go to school" implanted solidly in his thinking.

For the past few years, Charlie just could not wake up in the morning. Weekday mornings dwindled into unpleasantness and we schemed about how to wake up Charlie via alarm clocks, turning on the lights in his room, music of different kinds, as our verbal requests that it was "time to wake up" were not only ineffectual, but unpleasantly nagging. Rare was the day when we were able to get Charlie up and out waiting for the bus; our (not intentional) "routine" was for one of us to run out and beg the bus drive rto wait a few more minutes while Charlie was pull himself into a sitting position.

Now with a later start time for school, Charlie is generally ready to go and often with several minutes (at least to spare). (I suspect a change in medication may have had something to do with his once being so groggy in the morning.) A 3.45am wake-up time means that wait is going to be a minimum of 4 hours, if we left at 7.45am (which would result in us getting to the Big Autism Center quite early). With Charlie liking school, he's much more motivated to go, and often has been waking up early in anticipation of going.

So on Thursday morning, Jim and me not making the moves to get into the car may well have seemed to say to Charlie , who is a bit more than prone to "catastrophic thinking," what if I'm not going to school just like I wasn't able to during that endless holiday "vacation." We showed Charlie the time on the clock but that only emphasized to him, there was some great yawning gap of time to get through, prior to driving to school. I have a 9am class three times a week and had to catch a train. Jim got up, found his shoes and coat, and he and Charlie went walking. I loaded up Charlie's book bag and put it in the white car and Jim called to tell me, they were taking the long walk route, the 4 1/2 mile one and could I bring him his gloves?

Charlie looked solemnly at me as I drove up and handed over his parka, too. He didn't ask to get in, and he and Jim continued on their way, through suburban Jersey streets and into a vaguely industrial/warehouse area and over the narrow bridge. Charlie was dragging during the last three blocks, Jim told me, and climbed right into the car soon as he saw it.

I envisioned Charlie dozing off at school all day and, too, that it wasn't going to be the greatest of school days, based on this very early, hectic beginning. But Charlie only took a 20 minute rest around noon, his teacher wrote, and had a really good day, including a trip to the supermarket during which he bought some groceries. He was his usual self when I picked him up. Jim met us and Charlie asked for another walk and off they went, except that Jim had to catch a 4.48pm train into Manhattan to speak to some Irish doctors about his book.

I figured, Charlie would most likely want a short walk, he had to be tired. Then Jim called me to say, it's gonna be a long run and could I spell him at X intersection, those Irish doctors at the New York Athletic Club.......

I found them and Jim rushed home and Charlie, blinking a bit, accepted the parental exchange. 3.45am wake-up be darned, he was smiling, a marked contrast to the harrowing half-hour of distressed crying of Tuesday. So much for being tired: Charlie kept breaking into a sprint. (Me seeing some kind of run-racing career blossoming with his every stride.) It was a peaceful easy-feeling walk that gave me plenty of time to plan out the first meeting of one of my classes, on Women in Antiquity.

As Charlie and I were walking towards home, it occurred to me that he was putting in nine miles of walking. Talk about going the distance!

Yes, that's a deliberate reference to the Disney Hercules movie which I had just showed a clip of to my Latin class Thursday morning (along with a discussion of cosmogony and black and red figure pottery----gotta make the most of things). That movie came out when Charlie was a baby, as I remembered on seeing Zeus giving baby Hercules a little Pegasus----my sister had given Charlie a toy baby Pegasus when he was born---and seeing the start of the movie, and young Hercules being derided for not being "normal" because his great strength results in buildings, porticos, the inventory of a pottery store, being smashed to bits, I couldn't help but seeing some parallels.

Meanwhile, Jim was racing to catch the train but couldn't because he was lugging a rolling suitcase of books; he drove the beat-up black car to the corner and started to get out to run for the train but realized he didn't have his de-rigueur-for-the-NY-Athletic-Club-sports-jacket so home again it was and then parking the car in some lot and making a severe rush for the train.

He made it: The family that sticks together, goes the distance together. 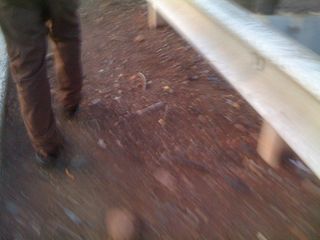 And regarding our navigator, Charlie our Gent, and some other maritime matters, Jim's written this.

I like the way you weave your teaching into the stories of your life with Charlie and your husband.

I also think the walking that you allow Charlie has contributed to his health and behavior, his quality of life.

The Disney Hercules is one of our favorites! The library used to have a book-on-tape, but it has been gone for 2 years now. Henry still asks the poor librarians about it every time we're there.

It's so reassuring to read your posts about Charlie's sleep issues. Meghan (6) has always been a night owl like her dad and could sleep until 11:00 if allowed. Melatonin has helped alot with her.

Gillian (4) is the opposite and is an early bird (4:30 a.m. usually). It's been especially hard the past few weeks - she's got some sort of skin infection on her foot that they thought was eczema, now they're saying psoriasis but no matter what it is it's not responding to treatment and it's very painful. So needless to say, between the two me and my dh are rather sleep deprived.

Charlie seems like such a happier gent when he's had a lot of exercise. You mentioned that you decided against the exercise bike, but can he sample one to see if he likes it?

Perhaps a One-Day Pass to a gym would let him try out the machines. Treadmills or elliptical trainers also provide the same types of large-muscle, coordinated repetitious action. This sort of bilateral muscular training literally coordinates both sides of the brain to work together more fluidly. Perhaps that's part of his desire for them - they make him feel "better."

If he had an activity that he could do at home, by himself, maybe you (one or both) could grab some extra sleep in the AM.

Kristina, have you considered a Wii? Our kids absolutely love it and it's a godsend when they need to get some energy out. WiiSports and WiiFit are both great games.

@Barbara,
I often mention Charlie to my students---only seems natural to mention my teaching here, I'm very glad you like to read about both!

@Louise, Charlie's started a program in Adapted Phys Ed at school that is teaching him to use the exercise machines---he's tried a number of the machines (exercise bike, elliptical). He'd need us around while using anything mechanical, as it is. He wasn't interested in going into the sporting goods store when Jim took a look at bikes. There's something important about switching actual locations for Charlie.

@silimom, today Charlie got up at 7am, perfect time---and is already in bed! I hope Gillian's infection gets better soon--am thinking of the tough time Charlie had with the infection in his mouth (which I'm sure affected his sleep, as I think about it).

@Gretchen, I like the Hercules movie the more I watch it! Love that opening scene with the gods and I was probably laughing more about Hades than my students.