Off Season? Never Heard of It 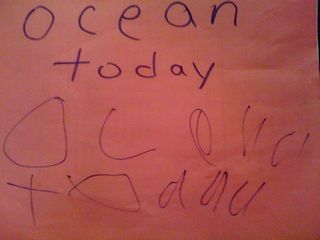 Though Sunday was a grey day, we went, as noted above by Charlie, to the ocean. If you've read my blogging from the days when I wrote My Son Has Autism, Charlie is in his natural element at the ocean, near the water and waves and the sand and all that open space and sky. Hence for almost year since Charlie was a baby we've vacationed for two weeks at the same spot on the Jersey Shore, renting a series of beach houses.

This winter has been the first time we've ventured "down the shore" (Jersey-speak that I, a native California, have gladly added to my vocabulary) in the off season. The swimming season being from Memorial Day to Labor Day, the "on season" isn't really that long. Jim---who spent his boyhood summers at the same place on the shore---starts counting down the time we'll return "for two weeks in August" virtually from the day we return home.

And it's finally occurred to us, the beach knows no seasons. You're probably not going to gambol on the sands in nary but a swimsuit in late January, but the ocean is always there, with the waves and the sand. Indeed, out on the beach today, we found it quite pleasant to walk on the clayey surface in boots and black shoes, well-bundled up against the wind. 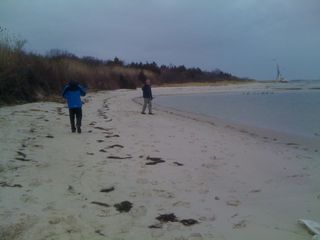 Of course, in the off season, we also get the beach pretty much to ourselves. Sure, you have to poke around to find something to eat, but it's not exactly hard to find a place that makes hamburgers or a convenience store in New Jersey. Many of the stop lights are set to blinking yellow on the main streets, so we can drive around without frequent stops and the music-blasting, fun-party-trouble seeking throngs are nowhere to be seen. It's a relaxing experience for all of us to be there. 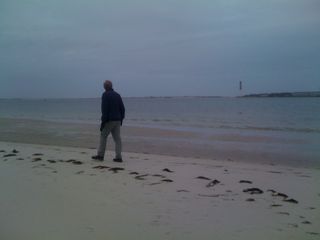 Especially when Charlie was younger, his love for the beach was equalled, if not often overwhelmed, by the pain of having to leave it. Our vacations have always been a thorough mix of sheer joy at seeing Charlie in the place he loves (and that Jim and I love), and deep anxiety, as Charlie's worries about leaving the beach---manifested as often severe neurological storms---have been ever present, and especially on and after leaving the beach. Even the promise of "we'll be back" could do nothing to assuage Charlie's sorrow. Consequently, we have not cared or dared to visit it in the off season. Too, when Charlie was younger, his main interest was to get himself into the waves, no matter what---that is, no matter the temperature of the water, or whether or not he was fully clothed.

Charlie now not inclined to go into the cold water and, indeed, kept a respectful distance up on the sand, out of the waves. 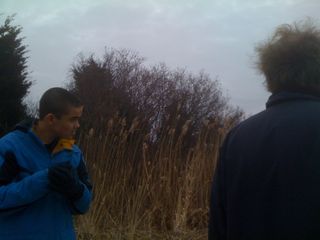 And after a walking up and down the beach (against the wind on the return trip), Charlie told us he wanted to go "home," rather than driving more around the beach, so home we went. He and Jim finished off the day with a walk around our neighborhood, before dinner, computer time, and bed.

I think Charlie understands that when we say "we'll be back," we're not funning him.

And Jim and I agree: For Charlie and for the three of us, it's always the season to be at the beach; on the waterfront. 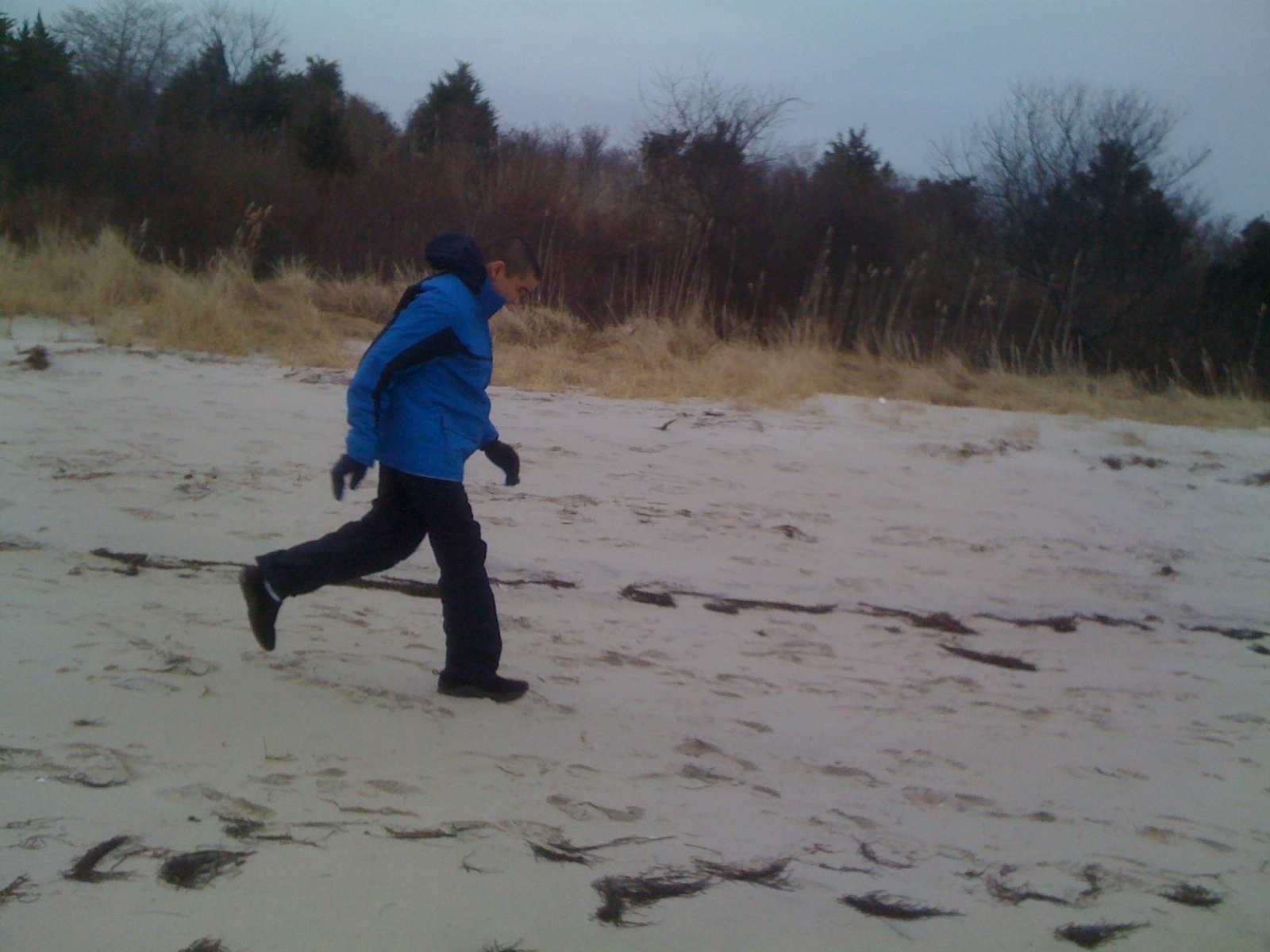 Ah, we stopped off season visits to the beach for the reason you pointed out, the desire to go in the sea all weathers. It may be time to try again as Dimitri has grown, and matured.

Your writing shows a real progress in Charlie, which is great to read and reassuring for me, as I can get stuck in the idea that things "will never change" - but they do.

Hey, at least the ocean doesn't freeze up like the lakes around here! I think I would be visiting too, that refreshing salt air has to be just as wonderful for you in the winter time! Awesome!

His new school environment is paying off for him, in emotional as well as intellectual ways. His levels of communication - both in expression and comprehension - are improving. Look at that writing! He understands that these written words are signifiers.

Now that you've been at the Big Autism Center for a season, what have you noticed in the pedagogical differences between this school and his former one? You were concerned about transferring to this school; how have you been able to deal with the negative effects you foresaw?

I have to agree with the other commenters about the marked improvement/increase in Charlie's communication. it's wonderful to read about.

He also looks so much more mature with his new haircut! Oh my.

I had resigned myself to thinking, ok, writing doesn't look like it's going to happen, and Charlie's lack of inclination to the whole process seemed permanent after _so many_ efforts. Typing looked like the only route.

Charlie seems to enjoy writing much more than typing---he's glad to do the latter if he really wants to see something on the computer, but that's it. When I brought up writing with teachers, the response was lukewarm; am sure they had tried very hard but found Charlie un and undermotivated. Often the words he's been asked to write at school are only nouns---his reinforcers, not things like phrases about what his day has been like, things he's done.

And just writing about crackers and puzzles, maybe not so interesting!

I left a comment about writing on your last post, but I also have a thought about writing stuff that one could not care less about or is a big deal to someone else, but not to him being asked to do the writing- especially when writing is not particularly easy to do.

Something that helped to break the ice for us was that we do grocery shopping together, and we make lists, and our daughter likes to see what she wants on that list. At first I did not ask her to write it, but just wrote it out in front of her while we worked out what to get (at the store at first, she would get the item and then the only writing involved was crossing out the word). I don't know if Charlie spells, but my daughter does some and started telling me the letters and watching me write. And then, after asking her if she wanted to, we wrote the words out together...and then at some point she started asking to be given the pencil. It was a gradual thing and we're talking some months here. Anyway, the point was that her interest has been much more meaningful than if I said, "You need to write this list" right out of the chute. YMMV.
In any event, his writing the way you are doing it seems to float his boat - and that's excellent.

@Louise, the new school uses very similar pedagogical methods---ABA---on paper; I think it's in the application and intensity in applying these that differ. Actually, your comment is food for a post......