On He and She and Other News

A little phrase Charlie said to me in the car last night signalled his increasing awareness of a subject he's struggled to grasp and articulate: Gender.

Starting when he was about 5, there've been attempts to teach Charlie the difference between "man/woman," "boy/girl," first with flashcards with carefully selected photos of these pasted on and then with real live people. Society's collapsing of gender markers like "pants for boys, skirts and dresses for girls" and short hair vs. long hair have made identifying those photos supremely difficult for Charlie. With actual people, his responses were sometimes right and sometimes not. Since it's always possible to be 50% right about whether someone is a boy/girl, or man/woman, we could never quite tell if Charlie meant what he said and said what we meant.

Nevertheless. No data or "hard evidence" to back this up, but, based on how he acts, Charlie knows the difference. Up until he was about 7, all of his therapists, teachers, and aides were women (a not uncommon situation in the special education teaching, and the teaching of younger children). When Charlie was 9, he had one male home ABA therapist and two male aides at school and he definitely seemed more animated and active around them. The therapist and the aides were all tall and were quite able to give Charlie piggy-back rides and to toss him around (which Charlie loved). At his elementary school, Charlie had access to a bicycle and he would ride it around the parking lot, with the aides running after him.

All three guys were, as they told us, very fond of teaching Charlie. From speaking to them, I got the sense that school hadn't been their favorite thing growing up and they always seemed to relish being able to run around and be active and energetic with Charlie. (And so you can imagine what a loss it was to Charlie when he went to middle school in September of 2008 and it was decreed, no more of that kind of "kidstuff.") (Plus, both of the male aides were sent to work with high school students.)

So when, yesterday night in the car, Charlie said:

I first thought, First time he's said that, and then it occurred to me, I think he's pairing the four of us by gender. And also articulating his knowledge.

(It is the case that I do wear skirts and dresses from time to time. And I think it wouldn't be inaccurate to say that Charlie's made note of this too.)

Thursday was also the first day around here that felt more like "the usual usual"---I can't write normal; a fair amount of people would not consider our daily existence "normal." Charlie woke up at 6.30am which gave him plenty of time to lie around in bed until he was fully awake, get dressed, run around the house and poke around the kitchen, use the computer, write and talk about the date with me, and load up the white car with various items (not the CD case---he looked crestfallen when we told him we were going to give it a rest, but then seemed content with the radio). He had a good day at school and a good rest of the day at home, going on two brisk walks with Jim.

It was the first day of no major drama in a while for us unless of course you count Jim and his book in yesterday's New York Times.

And that little phrase that Charlie said. 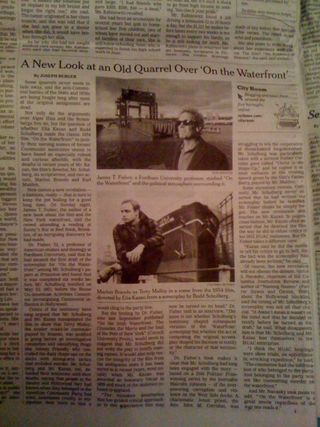 I'm always a little disappointed that there aren't more male therapists and teachers. I do feel kids recognise the difference, even if they can't express it. Dimitri wants to join the boys playing ball in the street, not the girls chatting. And he seems to have a different "bond" or relationship with the male therapists he occasionally had.

Must say, I'm not always sure as to the wisdom of sticking strictly to age appropriate play.

Good day yesterday! I wonder what inspired Charlie to say that? Hope you have another good one today.

"as to the wisdom" - I mean the professional slant on age appropriate teaching - not your wisdom!!! Eeek! didn't quite look right when I reread it:-)

"Gong Gong Daddy. Po Po Mommy" I imagine that must've been as sweet as the first time I heard Nik utter the word "Mama."

Your recent posts have me wondering...what is happening for Charlie around any augmentative communication supports? Is this something school is investigating and trying? I hope so; I truly think that Charlie has SO MUCH MORE to tell the world and just needs the right tools to be able to do so.

I'm sure he knows something, even if he doesn't know the words for it. I work with a boy who I am sure knows too, but also doesn't have the words. He doesn't know the names of people, but when they tried to teach him, all men became one male name, and all women became the name of one woman. He also tailored his escape/avoidance behavior to the gender of the person he was working with. He never blew kisses at his male therapist, and never tried to get the females into the rough things he would do with the guy.

Congrats to Jim (nice spread! And the Times, no less).

So glad to hear of the good day and thanks for sharing the article on Jim.

I don't want to speak out of turn, but I might be willing to bet that Charlie has been aware that there are genders for awhile and has some discrimination. With our daughter, some breakthroughs are truly "lightbulb" moments related to finding a way to teach a concept, usually the more abstract and novel ones, in a meaningful way, but a lot of times, and possibly more often than not, it's a case that what we've really done is managed to help find a "handle" to let her let us know that which she already has under her belt. Sounds like he might be doing the formulation himself.

Keep in touch with how that goes.

Warm regards, and as Joe says - stay warm (it's freezing here, but no doubt tropical compared to NJ!).

Tangential sidebar: As to "no more kidstuff", as in physical activity - well, that's pretty cut-and-dried. On a sidenote, when did it happen that being physically active was inconsistent with "learning" or "opportunity to learn"? Is it only respectable when "structured"?

We ran around like banshees (to some chagrin of our teachers in Jr. HS), and had multiple recess breaks and PE every day, even in HS. Now I hear talk around these parts about cutting out recess for kindergartners so they can get in more "learning time". If I was a young, or even not-so-young, kid now and that happened, I'd run the risk of bursting at the seams.

Charlie only had gym at 8.30 or 9.30 at the public middle school and, aside from walks, he was pretty much in one not very big room. Looking back at this set-up I realize it was a potential recipe for disaster! Now he has APE, walks, and just a lot of space.

He's been wearing his parka over his fleece jacket on his walks with Jim (who found super warm gloves---Charlie seems to prefer to go without, though we carry them should he want them).

Regarding getting an augmentative communication evaluation---there was a sense that this would be a good idea, but then came the big issue of who's going to pay for it, scheduling it, finding someone---currently mired in that sort of thing. Pushing on---

Re: augmentative communication...does the BAC have some devices that Charlie could just try out? Our ATAC (assistive technology and...something...center) people do AAC assessments all the time, but they also have a variety of devices (and software) for us to borrow and try in the classroom without formal assessment.

I'm kind of surprised that NJ, with its reputation for being more advanced in intervention and autism supports would have big issues on supplying or facilitating AAC to a student who might benefit from having a reliable and functional communication system.

We're here in the relative sticks but our ESD lent us all kinds of language masters, PECS stuff - a dynavox (which if it looked like it would have been a "go",and codified in IEP, would have been the district's, but useable until IDEA expired).

Somehow development of a functional communication system seems like way more than a good idea. It sounds like you have that in hand/in progress, so my best wishes on success in those negotiations. Having gotten on my soapbox about "busybodyitis", I hope you will pardon this link
http://www.drnj.org/atac/
Maybe it would be useful to someone, and if you know that the loaners, etc. are not quite as swift or available as presented, that might be a reality check one could use.

But still kind of surprised.

@Emma, I caught your meaning about 'wisdom,' no worries!

@Regina, sigh, yes, once again NJ isn't measuring up to what it might seem to. Again and again there's the sense that "Charlie can talk and we need to work on that and we'll see....." I might be characterizing this too harshly but it has been some years that we made these requests and have not heard exactly enthusiastic answers.

Thanks for the link, for sure!