So Very Much to Write About 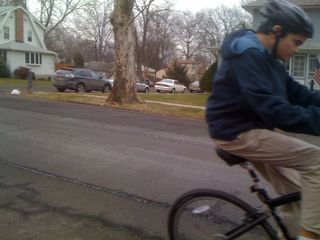 Charlie does not have school today, Monday, the 18th of January. As I've regularly written before, no school for Charlie is usually cause for a lot of concern: While we're readying ourselves for some "no school anxiety," I wrote about Why I'm Glad My Son Has No School Today, on Martin Luther King, Jr., Day, at Care2.com.

Last weekend was rough so we went into this weekend with a fair amount of wariness. So far, it's been two good days, minus the half-hour on Saturday when Charlie threw the contents of three kitchen cabinets onto the floor. Within fifteen minutes--sniffling and mournful---he was picking up every last item and placing them all back where they belonged. The day proceeded very nicely. Sunday he slept in a little, went on a short bike ride (he saw "a certain dog") and then a walk. It was good that we got those in as, from noon on, it rained, sometimes very heavily.

We ended up using the computer way too much. We've pretty clearly established that watching videos can really over-stimulate Charlie (leading me to suspect that he's not likely to fare well at a movie, for the nonce). I've been having him do some writing to break things up and so far the result has been good. I've been having Charlie do some writing intermittently with the result that he has not been getting overly obsessed about watching video after video, and also has been handling the frustration of not being able to find a particular video that he wanted.

First I have Charlie write the date and day of the week. Thereafter, I've had him write things we've just done ("I walked") to things he keeps saying ("Gong Gong Po Po coming soon"). After we'd tried typing in several combinations of words to find one video with no luck, I wrote "can't find it." Charlie copied the sentence and then I pointed to each word as I read them out loud, Charlie looking closely at the words on the paper.

Perhaps putting his worries, wants, obsessions into a few words on paper is helping him to feel that those worries, wants, obsessions are contained and therefore a bit more under control, a bit more manageable? This is speculation, of course, but trying to get a handle on my own worries, racing thoughts, fears, imaginings, is one reason that I write them down. I feel a little revolution going on, if this is the case for Charlie too.

Indeed, he remains not at all unwilling to pause from video-watching and to write. And, his writing (in 2-3 inch high letters) is getting a little better, especially with the first few letters of each word. I can also see that he's looking much more carefully at the letters that I've written out. Charlie's always had trouble writing diagonal lines (due, we suspect, to difficulties with fine motor control and also mind-and-hand coordination). Yesterday he wrote the best k I've ever seen him render, one vertical line on the left and two perpendicular, shorter diagonals. Those two shorter lines were written like this > rather than like this <  but I could tell that Charlie was really trying to get them in the right place.

Yet another reason why I'm ok with Charlie having a holiday today. If it weren't for the civil rights movement, where would disability rights be, and the Americans with Disabilities Act, and IDEA----Charlie's and so many children's right to a free and appropriate public education?

Your weekend sounds similar to ours, out for a walk, dvd and some youtube, tried writing but Dimitri brushed me off. I worry about too much TV and computer, but at the same time think maybe I should relax a bit, there doesn't need to be a lesson involved all the time (actually, I'm very confused as to whether I'm "doing enough" or not, and whether Dimitri is getting bored, sigh, I seem to go round in circles with this thought).

There does seem to be something about putting it down on paper. Last year when Patrick was having difficulties processing certain social information his EA made him a little book he could draw or write in after an incident that left him confused. It really seemed to help him. Good luck with today.

And a lot to be happy about, both for Charley, his very caring parents, and for our country!

My eldest son is left-handed and his handwriting is not the best. It's legible, but unless he makes a special effort it's sometimes hard to decipher.
Typing works better for him and ever since he was in fifth grade he's typed most of his writing on his desktop or laptop.
Would Charlie do better typing than printing? He might find it an easier and faster way to express his thoughts.
I also wondered if you've ever taken Charlie to an observatory? When my kids were younger they liked watching the stars and planets at a small observatory in the Flemington area. It was very calming and serene and Charlie might enjoy the experience.

I have so much compassion for the children & the parents who walk with autism
every day. I want to share some information about a FREE program that pioneers energy medicine & healing. EMC2's AIM Program has been in existence for more than a decade and is worldwide. It is a unique form of healing and I have walked with many whose children of all ages use AIM as a tool to support healing. The beauty of AIM is in it's simplicity and for autistic individuals it is FREE. Go to my website and investigate what AIM is. I can connect you with other parents whose children have benefited with AIM and there are many testimonials. It isn't too good to be true. Give yourselves & your children an opportunity. You don't have to go anywhere, see anyone or pay for anything. I am a facilitator for hundreds on the AIM Program. Call me. It will change your lives~ From my heart, Infinite Gratitude & grace,
~Joanne~
~~~~~~~
www.energeticbalancingjoanne.com

An observatory----hmmmm, Jill, thanks for the suggestion!

I thought typing would be easier and more 'natural' for Charlie, so to speak. But somehow he seems more interested in writing, much to my surprise. There's been much more of an emphasis on him learning to type at school; maybe it seems more of chore to him?

It's just a really new thing to have Charlie showing such interest in writing. I remain quite floored. We didn't do as much today (of the writing) as I thought we should have. Guess I still have that little voice in me saying that every moment should be potentially didactic.

Matt has never been to a movie - not sure that will happen anytime soon.