The Beach in Winter

Finding a way for Charlie to be in the world, and a place in the world for him: This has become Jim's and my constant search.

In the past year and three or four months, Charlie has, it seems, made a transition that, though inevitable, he certainly wasn't asking for or anticipating. Though he's just over 12 1/2 years old and, developmentally, much younger than many children his biological age, Charlie has physically ceased to be a child, at least in the eyes of the world. And while he's not yet a teenager, he has gone through the physical changes of puberty, with his voice changing, the appearance of facial hair, and---the thing no one can get over---adding several inches and a lot of muscle to his frame.

Sometimes I feel as if (from this physical perspective), Charlie has gone from boy to guy/man and skipped whatever transitional part was inbetween. There has been no transition, no grace period, from boyhood into a big guy. While Charlie is still truly a child within, it often feels like he's been cast into a man-size body whose strength he's neither completely aware of, nor able to control. Aside from school and home, interior spaces seem booby-trapped with noises and clatter and voices and shelves of stuff; with people who Charlie--perhaps wishing to be social?--taps. I more than appreciate that, with Charlie around, we can get the last bottle of shampoo placed on the top shelf, even as I'm aware that the store seems smaller, its ceiling lower, when Charlie is present.

Saturday we went to see the ocean. 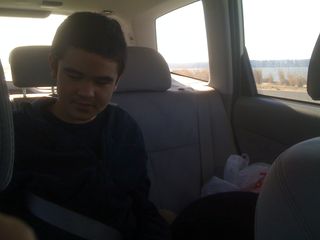 The bay is right on the other wise of this fence, which is white from water freezing on it it. 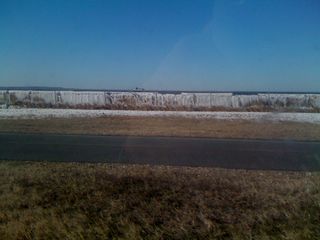 Frozen snow on the ocean. 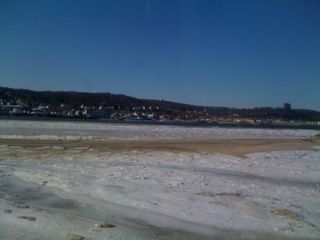 We ventured onto the beach. 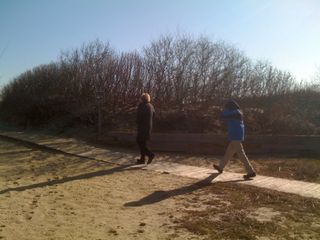 We've never gone to the beach in winter with Charlie. I think there were always worries about exposing him to snow and cold when he was younger, but he can take those fine now. 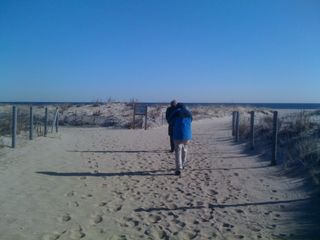 Winter is the off-season at the beach. 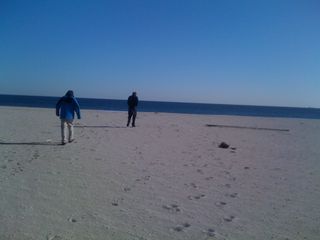 Am now thinking, every season is beach season. 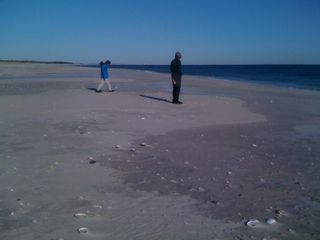 And this is Charlie running on the beach in the wind and cold, his expression telling us, he's home. 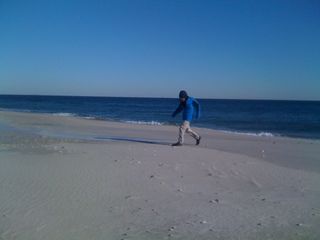 Kristina, I am can totally relate to what you are saying about the whole growth and development thing. It almost seems unfair that our boys bodies seemingly advance faster than those in their age group, but their, oh, I hate to say intelligence, but their mentality I guess, is that of children much younger. Casey is head and shoulders over even 12 year olds I run into from his school (he being only 11 in September). And they are offering "Health" classes at school now and they want to know if I am going to allow Casey to participate. Well, despite his physicality and all that that entails, I have to say no, would I let my 5 or 6 year old do sex ed? It's such a dichotomy. Just another thing we have to deal with in all our infinite wisdom!!! lol

I don't think it struck me before now— until I saw the photo of Charlie in the car, just how fast he has grown and changed. I don't envy the challenges which surely must come with such sudden changes. I am grateful we have a few more years before we have to deal with that.

Charlie+beach=HOME. I totally get that! :-) I think that is his universal constant.

Ah, puberty! My assistant teachers and I had an awful time of it when two of the boys in our class kept unzipping their pants and, how shall I put it? having fun with themselves in public.
One of the kids had to be hospitalized because he was so enthusiastic about his newfound activity that he bled and the object of his interest became infected.
When our single female student started menstruating things got worse because she wasn't toilet trained and she had no idea how to change her sanitary napkins.
Fun times.

Does Charlie know about sexual (bodily) differences, as well as gender (conceptual) difference? As he enters adolescence, so are you going to handle sexual urges and interests? (Hope that's not too personal a question.)

"Finding a way for Charlie to be in the world, and a place in the world for him: This has become Jim's and my constant search."...."And this is Charlie running on the beach in the wind and cold, his expression telling us, he's home."

Charlie's home isn't the beach in winter, even if he is happy there. He can't live there, even if he's happy when he visits it. Neither can you. How long could you stand there, in the 20 degree wind? How long did he run, enjoying himself, in spite of the cold? How soon did you get back in the car and return to the warm house that you and Jim must constantly work to pay for, and must constantly repair?

This isn't meant to criticize your approach. But I don't think it's fair romanticize in some way your response to Charlie's desires, either. As Jill's post points out, her kids couldn't follow their impulses and desires all the time - it could actually make them ill. You've faced this with Charlie's head-banging.

What do you do as he gets bigger and stronger, and you grow older and weaker? How does he respond to "no"?

There may be no permanent "home" for Charlie. Is there for any of us?

Did he try to get in the water, or does he understand it's too cold for that?

The pictures are beautiful, I bet you all enjoyed the trip.

I grew up in NYC and we always made a pilgrimage to the beach in the winter -- usually Rockaway -- my mom loved the beach in winter. Curiously, she didn't seem to like it that much in the summer.

Wow. The frozen water on the sand is really something. We're further from our coast than you are from yours, so it seems more "hassle" to get it together, but once there...we know why we made the trip...something about the smell, surf and scope. Is that the same for you?

Yep. The growing up piece, including the big s-e-x. In the past year our daughter grew a lot as well with all the associated stuff that goes with going from girl to woman. I hope I can do a good job of recognizing and keeping up with helping her with the practical realities, including safety and boundaries, related to that while also being respectful of the changes and feelings that are natural and expected. This would be true for any adolescent, and even if I wished otherwise, time and tide wait for no man. Wish me luck (smile).

Kristina, I have always appreciated how both you and Jim seem to meet Charlie where he is and take that into consideration when meeting his needs. You know your son so well and I appreciate your willingness to let us be a part of your experience as a family.

I don't think it's over romanticizing Charlie's situation by commenting on his love for the ocean and the fact that it's a place where he feel comfortable and free to be himself (a feeling we often equate with the word "home"). We all have places where, I believe, we feel more attuned to the universe and our place in it. Kudos to you both for making sure Charlie has access to those places, both now and I'm sure in the future.

And I bet people have said this before, but Charlie looks an awful lot like his mom! :-)

@silimom, when Charlie was born, I described him as "me as a boy" (smile). But he definitely has Jim's body type and, more than obviously, height!

@Jill, Charlie _seems_ to know that he can only do "that" at home, preferably in his bedroom. But we shall see......if I had a girl, just think about what I'd be writing about here.....

@Louise, well, the only place I would consider a kind of "permanent home" might be the mountainside cemetery where my grandparents are buried, and where my parents will be buried. We have thought of buying a plot there for Charlie beside my parents---this might sound a bit morbid. But it is something we have thought of. We all just feel better at the ocean. I think daily of all those questions you ask and, what can I say, it's one day at a time, together.

@Leila, he didn't try to get in the water---he knows it's cold! (Though I did have a last minute worry that I should have brought extra clothes.) Jim and I would have walked on the beach for a bit longer but Charlie wanted to head for the car first.

@Bonnie, Sometimes I think it was just a cruel joke that our kids had to develop so early. I mean, with everything else? People can't believe Charlie is as young as he is and his size (have you seen this with Casey?) leads to Charlie being treated as far older than he is----not always what he needs!

All three of my sons love the ocean. When my oldest son was between 6 and 8 years old, we took him to the beach almost every day even during the winter days when no one else was around. The open air, the smell of the ocean, the sand somehow give my children an "easy feeling" that they not find in other places. The beach was the place my oldest son learned his first words (water, sand, cloud, boat...) around 6 years of age. Your pictures brought back many great memories. I thank you for sharing them and hope that your team of three continue to have more great memories together.

My brother-in-law, raised in Nebraska, needs the flat prairies the way we East Coasters need the ocean. (I'm revivified by New England coastlines, and by those rare forests far from the sound of human engines.)

"...what can I say, it's one day at a time, together." It's the way we all live our lives, and the TTT has especial reason to do so. My great concern is that you give yourself so little room for taking care of your own needs that you end up harming yourself (through exhaustion or other strains). That would be a disaster all around.