The Lag and Language 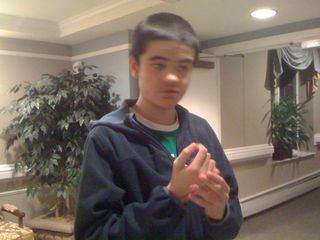 Nothing like reading a research study that actually describes something that (we think) we definitely see in Charlie, a delay in his processing of auditory stimuli and of stimuli in general. A study published yesterday in Autism Research by researchers from the Children's Hospital of Philadelphia measured magnetic signals in the brains of 25 children on the autism spectrum with a mean age of 10 years and of 17 typically developing children of the same ages. To do this, the researchers used magnetoencephalography (MEG), which detects magnetic fields in the brain (similarly to how electroencephalography (EEG) detects electrical fields in the brain). They found that:

The children with ASDs had an average delay of 11 milliseconds (about 1/100 of a second) in their brain responses to sounds, compared to the control children. Among the group with ASDs, the delays were similar, whether or not the children had language impairments. "This delayed response suggests that the auditory system may be slower to develop and mature in children with ASDs," said [study leader Timothy P.L. Roberts, Ph.D., vice chair of Radiology Research at Children's Hospital]. An 11-millisecond delay is brief, but it means, for instance, that a child with ASD, on hearing the word 'elephant' is still processing the 'el' sound while other children have moved on. The delays may cascade as a conversation progresses, and the child may lag behind typically developing peers."

Researchers used a helmet that surrounds a child's head to measure the signals. The children were presented with a series of recorded beeps, vowels and sentences; noninvasive detectors in the MEG machine analyzed their brain' changing magnetic fields. According to Dr. Roberts, "'.. this pattern of delayed brain response may be refined into the first imaging biomarker for autism.'"

We've long noted that Charlie has such a lag in processing auditory stimuli and so, language. It's not uncommon for him to pause in his tracks, press his hands over his ears, and stand completely still, or---while something is being said to him---to be looking out of the corners of his eyes, unfocussed on who or whatever is in front of him. I guess some might think Charlie is "zoning out" or "ignoring" us or "not paying attention." But he's actually trying super hard to work through something said to him, though at a far slower rate than most. It's rather as if, I suppose, he's forever finding himself in some country whose language he only knows a few random words of, and even those words he pronounces in such a way that the native speakers thing he's saying mumbo jumbo.

While Charlie has had a lot of struggles in the past few months, I also sense that he's been growing, becoming more aware, trying to express himself more, developing more skills. This was apparent Friday. He had a good day at school but got into the car with his face in a tense line: As Jim noted later, Charlie must have been thinking about how it was Friday and he'd once again be in a "no school state" on Saturday and Sunday and have to deal with the Monday transition back to school. We did the rounds of walks and hanging around home and then went to visit Jim's mother. She was in a very agitated state and Jim and I exchanged looks and had Charlie tell Grandma "bye," after which I took him out back to the car.

After Jim appeared, we got Charlie his favorite Vietnamese summer rolls to go. As I got out of the car to pick up the food, Charlie told us "open door, open door." But, some weeks ago, Charlie threw a bowl at the restaurant and we knew we had to take that restaurant out of our rotation of places to visit, at least for the time being. When we got hom, Charlie went on another walk with Jim, in seeming good spirits. But he was yowling on returning and after taking off his coat, ran into the kitchen and plastic dishes went a-flying. (These would be the plastic dishes that I had put in a cabinet just in case this sort of thing might happen.)

Charlie to his room and cried and stomped and told us to go away. He stayed there for almost a half-hour. Charlie was quiet when he came out of his room. He ate half of the summer rolls and cleaned up all the plastic on the floor, and nosed around in the refrigerator. He talked about my parents, Portia the dog (she is not, though, my parents' dog, they do not have one!), and "no more head bangs." He ran around and did more stomping and jumping and stayed up later than usual before gathering up his things and heading for bed.

And that's all he did. Instead of the sorts of neurological storm behaviors that he has tended to have, especially over the past year and couple of months.

Maybe there might be more of all that tomorrow, or next week, or in a couple of months. Charlie keeps growing and changing and he's always in the midst of processing everything and explaining it all to himself. There's always a delay between occurrence and understanding---and there's much more of the latter, we need always remind ourselves, than we might first think.

You made a good point when you compared the way people on the autism spectrum speak to tourists struggling to make themselves understood in a foreign language that they grasp only vaguely.
My French is similar to the speech of my former students: "I want one coffee, if you please. With sugar. No milk. Thank you."
I'm fluent in English but I sound odd and stilted when I try to speak French.
I would love to know why an autistic child who has been exposed to a language since birth still is tentative, at best, when it comes to speaking and understanding that language.
Many of the parents of my former students had their children's hearing tested, supposing they were deaf, but the children could hear perfectly.
Why, then, do many autistic people never progress beyond stilted robotic speech? Why do many kids like Charlie find it almost painful to be in a group of people who are all talking together?
In another point, I'm sorry to hear that your world is becoming smaller when you strolling in New York City because Charlie has taken a dislike to walking in crowds or when you can't visit a favorite restaurant because Charlie caused a ruckus there. You and Jim need to get out and enjoy yourselves. I wish you had a reliable helper who could watch Charlie for a few hours so you could get out more.

"An 11-millisecond delay is brief, but it means, for instance, that a child with ASD, on hearing the word 'elephant' is still processing the 'el' sound while other children have moved on. The delays may cascade as a conversation progresses...."

I think this might be a key to the frustration that Charlie feels? I am sure it is such a struggle to try and process what is being asked/said to him and then to try and respond.

We have experienced the same frustration with my guy - he interprets something asked/said and then answers with what he thinks is a logical response. The problem is he interpreted the question/statement incorrectly and I get frustrated because his answer makes no sense. Then he gets frustrated because he believes he answered correctly and it goes in a big circle of frustration.

(This is why I don't homeschool or help with homework - we both would end up jibbering with anger and frustration : )

@Kate, I think much the same as you describe happens with Charlie, with both his hearing of what others say and his own formation of a response occurring quite "out of sync" with that of many people, and quite to his consternation. We have thought that this sort of the thing, a communication issue, is behind much of his frustration, and the accompanying non-verbal responses.

@Jill, thank you--I guess the world becomes smaller, but opens out in other ways, though (my optimism showing through) I like to think that this, like much else, shall pass and change. Regarding the restaurants that we're not going to anymore, Jim and I have often felt it was time to move on, but Charlie continues to request the same places repetitively. We've yet to manage the trick of knowing when it's time to move on before Charlie reaches saturation level!

They are only scratching a surface there, bloody meg machines don't know the half of it, delays can take days, one of those points of agreement I do have with Donna Williams.

It does take me days to process auditory input sometimes, which makes life very interesting.

When my mum used to ask me about my day, I would say ask me again tommorrow or the day after and I might be able to tell you.

One of these days I will give you the evidence where MEG ECG and FMRI screw up, but I guess if you have patience the mainstream will deliver that to you in delayed fashion, because I think you probably have the greater cognitive delay of all, in not believing our first hand reports without this (expletive deleted) scientific half truth crap which funtions for you as scripture did in the middle ages.

This is an interesting thing I have come to terms with that I do not even expect to understand things without a considerable delay, and sometimes that delay is years, yes years, now your bloody meg people can't wait that long, the experiments can't be done in the real world so meantime they wank on and gain there plaudits for nothing much at all.

Interetsting how scientists figure out things that we, the parents, already know. Auditory processing is a difficult part of life for our kids. But I have found that as they change and develop the boys auditory processing has gotten better. It's not perfect, but quantifiably better on testing. So maybe that can be happening here too. As Charlie slowly is able to parcel out his world a little easier maybe the storms will become less and less. I hope so. Does he react to his grandmother's condition at all? I know even when my oldest was at his most disabled he had aterrible time of it when his great-grandpa died. Maybe Charlie is upset to see his grandmother and can feel how upset Jim and you are too. I have found that at times, the boys empathy is astoudning. Well jsut a thought as to why he was upset later in the day.