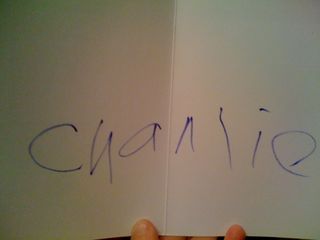 Charlie had a rough re-entry back to school on Monday--- yowl bang throw from almost the moment he got up to getting into the car. He was glad to see that the gates to his school were open and for us to drive into the bus line, and to get out with an aide. Then he had a really tough morning during which he ate nothing (he sent his lunch flying in the cafeteria).

Jim and I had taken a close look at his mouth and decided, to be on the safe side, we'd best take him to see the doctor in the afternoon, so I called for an appointment soon as we dropped him off. Getting that set up and some other business (including Jim talking to a reporter from the New York Times about On the Irish Waterfront; some home improvement measures; a paperwork issue with the school) took up the morning and then we picked up Charlie early and then it was back to the doctors' office and the office staff was really extremely nice, telling us at the last minute that an exam room was available so Charlie could wait in the car. In fact, I ran outside to tell Jim and Charlie that the room was empty, saw that the car was empty, dashed in cell phone to my ear and was told they were in the exam room.

The nurse practitioner could not have been better. She told Charlie, clearly and directly, that she needed to look at his mouth and he readily assented (also to her touching his lip, so she could look into his mouth). Then he and Jim went back to the car while the nurse looked up a type of antiseptic oral cleanser/mouthwash ("the kind they recommend for teenagers who get their lips pierced"). She told us that there was no (as we had feared) infection on Charlie's mouth.

Sorry to go on and on about this but, as you can see, what might be an uncomfortable annoyance for a week or so for many of us can be a lengthy, seemingly endless, ordeal for Charlie. I had noted to the school behaviorist that the sore seemed to be a likely reason for Charlie's discomfort, and behaviors over the break and, too, on Monday morning. Past experience has shown that if we tell him not to touch and pull at a sore, he'll just do it more. Each loose tooth (and Charlie said "loose tooth, it's stuck" to me later in the day) was an agony for Charlie, who couldn't stop obsessively wiggling and pushing the toother with his tongue.

This is a long-winded way of saying, that's why I didn't realize that the post I wrote for Monday about reading had disappeared from here in the morning. I only reposted it in the evening after giving myself a kick as reading in general and teaching Charlie to read in particular are topics constantly on my mind. Jim and I spend a lot of our time reading so I guess that's one reason it sometime sseems to take us some extra effort to devise other things for Charlie to do to keep himself occupied.

Our vigorous walks outside have been a great thing. If Charlie often starts the walk agitated and weepy, he rarely ends it in that state. It's a walk of just the right distance to tire him out without being overly onerous and the cold seems to reinvigorate, and to calm, Charlie. (I guess it also helps that New Jersey, while colder than my native California, is no Minnesota or Canada.) After visiting a few sporting goods stores, Jim and I have tabled the exercise bike idea, Jim thinking that it's the getting outside and into a big open space that it as important to Charlie as the physical activity of walking. We're pursuing music lessons for Charlie (not piano at the moment, maybe something with strings). We keep taking him by the pool and honoring his "no" (Charlie did say he wanted to go swimming Monday afternoon, but the pool was already closed for afternoon swim team practice). 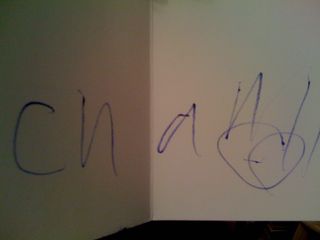 In the midst of more typing into the computer and video-watching, I pulled out a pad of paper and a pen. Charlie has, at my request, signed a couple of thank-you notes to send to my relatives. As he's been talking about my dad -- "Gong Gong back, Gong Gong coming soon" -- I took out a pad of paper and dictated the letters "G-o-n-g, G-o-n-g" to him and, rather than pushing aside the pen with a "no, no, no," Charlie wrote each letter and looked over his writing for a bit.

Hmmm and the little lightbulb in a slightly fried mother's brain goes on; me being a mother who filled a lot of her time as a child not only reading, but writing. I know Charlie practices writing words like his reinforcers at school; all nouns and single words. But there's so much more to my boy than the things he wants.

In very neat letters (not the usual atrocious scrawl I grace my students' papers with), I wrote, each sentence on a separate piece of paper:

I live in New Jersey

I handed Charlie the pen and pad, which he held on his lap. I pointed to each letter and also read them out, and, in his big, loopy letters, Charlie wrote:

I live in New Jersey

He didn't seem at all averse to the activity, so I asked him, "Well, what do you want to add to the story?"

on the next sheet of paper.

And so did Charlie.

We'll see what he wants to add to the story tomorrow.

Great writing! Can't wait to see what else Charlie wants to write. The lessons at school probably are a bit dull. I've found Dimitri is interested in watching me write, although he can't write himself. A while back I kind of adapted something after watching halo-soma rapid prompting videos (controversial I know)and Dimitri really enjoyed it, I've been a bit of a slacker of late though, really should try it again.......

I have some other cards in which a couple of the letters for "Charlie" are writ on top of each other! Practice makes perfecter, though Charlie's not very inclined to do many rounds of this sort of thing.

Many of Charlie's letters look alike, rounded u or n shapes, but he definitely is looking is trying to form the shapes. Lots of trouble with diagonal lines (u is the same as v, but it was the same for the Romans....).

Am curious if you're ever able to note what you did with the "adapted halo-soma" method. Did you try Dimitri pointing at letters to spell things?

I love Mom and Dad.
I love noodles.
I love swimming in the ocean.
I am Charlie.

The possibilities are endless! I admire how your post goes from not an infection to beautiful written expression.

We will one day reading a post here by Charlie. "Hi, I am Charlie" is a good beginning. Great Job! Charlie.

OMGosh that is awesome! :-)

Sniffling back more than a few joyful tears at Charlie's story.

And "I still love sushi."

Has Charlie lost his molars yet? I remember mine being when I was 12ish, mostly because I ended up having to have the baby molars pulled--not fun. He may be right that he has a loose tooth!

Hooray, Charlie! I love reading about him... it makes me feel so hopeful for our future. Charlie reminds me of my sons in many ways.