Home Archives Profile Subscribe
Goings On: New DSQ on neurodiversity and a few more words from Charlie
A Lot of Wet, Some Little Wins 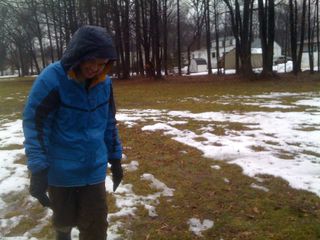 Charlie likes his routines. Or rather, Charlie needs his order, to the point of demanding that things always be the same way.

In the past several months, we've noted that when we adhere to those "orders" (playing certain CDs over and over in the car, driving down a specific road)---because Charlie keeps asking that we do---he's had some really intense (banging and biting) neurological storms. And both when (1) we do something different and (2) when we keep doing what he asks.

It's not a surprise that Charlie gets upset in the case of (1). But (2)---Charlie getting upset even when he's got precisely what he says he wants---is harder to understand. Lately I've been thinking that Charlie himself gets tired, weary and even sick of the tightly-wound structures, the strictures, he creates for himself. And because his default mode is to stick to his known way of doing things, it's extremely difficult for him to wrench himself out of these. So he's always more likely to ask for more of the same, regardless of what banging unhappiness may ensue.

Case in point occurred at the grocery store last night. We do tend to go the store a couple of times of week, each time just buying a few items; seems to work for us better than doing one big shopping (plus, any food lying the house tends to get eaten). The night before (Monday) we'd gotten brownie mix and Charlie was very happy about that: He really likes making brownies, in part because he seems to enjoy the process of getting the bowl and breaking the eggs and seeing it all get mixed up, and in part because he prefers to taste the batter than the finished result.

Last night we passed the cake and baking aisle and Charlie looked at me. "Yes? Yes." And down the aisle he went. I followed. Charlie stood before the shelves of cake mixes and frosting and looked expectantly at a red box (Becky Crocker brand) of brownies, and said "yes, yes," many times, and more and more insistently.

At first I said "we got it yesterday." "Maybe tomorrow." "We still have brownies at home." Then I just stood and occasionally shook my head: Too many words can (we've learned) fuel Charlie's anxiety.

Not surprisingly, Charlie persisted, even to the point of picking out a box of mix and trying to put it in his shopping basket. Getting the sense that the more we got the brownie mix when we went to the store meant that grocery shopping was going to start meaning ALWAYS GETTING THAT BROWNIE MIX, I pointed out the other brands and indicated, we could certainly get one of those. "Duncan Hines, Pillsbury....," I reeled off the names.

These suggestions, designed to gently steer him out of what's become a box of a routine, were all met with "No." I persisted in not saying anything and started thinking of what Charlie might do if he got really upset. (It's happened at this particular grocery store before.) I made sure I had my hand on my phone in my bag.

After several minutes of staring fixedly at that red box, Charlie started inching himself down the aisle, but just barely. I mentioned sprinkles, which are a few shelves down. Of course, two people were having an intense conversation right in front of the shelf with the sprinkles (which they had no apparent interest in). I prompted Charlie to say "excuse me" and the man and the woman moved apart (and kept talking). Charlie selected a container of blue sprinkles and we moved down the aisle.

He darted ahead of me on the other side of the store near the freezer cases, having detected a row of large-size sprinkle containers. "I want," he said, holding up one with Critter Crunch---multicolored mini dinosaur-shaped sprinkles.

"Sure," I said. "But then we don't need the blue ones." And Charlie left them on the shelf and, carrying the basket in both hands in front of him, got in line to buy everything.

And I was quite glad to be wiping up those random pastel-colored mini-mini-mini dinosaurs after a rainy walk through slush and ice and Charlie moving some more of his stuff (two purple plastic Little Tykes chairs bought when he started home ABA in September of 1999) out of his room. It's good to do things differently.

It's very hard with our kids, to balance between pleasing them (they deserve to be pleased!) and inadvertently laying a new routine that becomes law. Leo has been craving instant routines lately (and he is coming down off a new-routine-is-perpetual-routine tantrum as I write this, regarding a game he made up just an hour ago...). Sometimes reassurances work, sometimes redirection; it is rare that he comes around on his own as Charlie did. Perhaps it's a maturity issue.

I wrote about this briefly on my own site recently. Leo's program supervisor has been asking us to be increasingly aware of the need to block or redirect potentially disruptive stims/routines/compulsions before the synapse chain becomes hard-wired.

At the same time he is also engaging in new language, interactions, interests, and games. Part of him is speeding up, part of him needs stasis and self-generated comfort. It makes sense. Doesn't meant it's easy for either of us.

Glad Charlie figured it out.

I think sometimes there is an expectation on the child's part that when they stick to their rigid patterns they will feel better. I'd have a meltdown too if I tried to make everything exactly so and still felt badly about something. I know this happens with Patrick and it can be very confusing for us all. Glad to hear the trip to the grocery store was a success on many levels.

Ours is croissants and blank cd's, although we haven't been going to the supermarket recently, thought we needed a break. I like the idea of keeping words to a minimum, I can give too many directions sometimes I know.

I was relieved to get to the end of the post, not only no "oh no" moments, but really a very successful trip!

Excellent job of gently turning his laser-beam focus further down the aisle. Learning how to detach from physical objects is something we all need to learn, I guess. Charlie's mastering it with his objects from childhood.

What objects have become representations to him of his new stage in life? The blue bookbag? The green notebook? Anything else?

Your patience and quick thinking inspire me.

I can really relate, even though with Pete, it looks a bit different...but I had sort of an "a-ha!" moment regarding Pete demanding certain things, certain sameness but then having a breakdown even when he's getting what he asked for. It's exciting that as the boys grow up, we get to know them better, understand them better, have more tools to help their neurological storms.

I'm another who can relate. That's for sure. So often I have to remind myself to change things up just so that it doens't become a routine. Blech. And often Henry seems relieved when we tell him it's time to stop a certain activity. Like he's tired of it himself but doesn't know how to stop. :-(

Sometimes when we had this kind of locked in thing where really, nothing was any good - I wondered, "is it possible that like most of us, that you really don't want A OR B but can't articulate that or can't say, 'I don't know what I want!' ".

Kristina, when you have these fork in the road moments, like with the brownies - if you just held up the "usual" and "not usual", would it be 100% certain that he would pick the "usual"? I'm also wondering if it has something to do with carryover from certain teaching practices, where when they have those "find the xyz" drills, that there's a "right" answer and that's that. Does that make sense? I've noticed that as I've become more flexible and cognizant of potential ambiguities, even pointing out my own mistakes and missteps in a goofy manner, that my daughter has as well. YMMV.

Charlie seemed to roll pretty well with coloring outside of the lines on the brownies and trading out the sprinkles - great!

it's one of the eternal, always-relevant Rules of Life:

I think aristotle was the first to point this out in his description of eudaimonia.

but his must have been made from honey.....

What a great report. I also wanted to inform you, that a matching bone marrow donor has been found for Natalie Nakatani. Bless you for any efforts you made to have people join the registry.