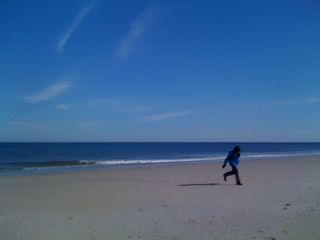 This post is going to be a jumble-potpourri-mishmash of things (sort of like this doughnut burger, hence the title) because too many things are on my mind at the moment.

1) We don't know if Charlie is going to have yet another snow day Tuesday. No word yet from his school as I type this at midnight EST. Jim happened to be near the town where the Big Autism Center is and told me that it is definitely snowing there, and it has started to here (just 35 minutes away).  Am sleeping with my phone nearby to get the news from the emergency hotline post-haste.

2) Having gotten through last week's snow days and a long weekend, "school" is a popular word around here. Yes, we love family togetherness; yes, we absolutely heart school (Charlie most of all), and you can only be philosophical about yet another day off from school for so long.

3) Speaking of philosophy reminds me of no one less or other than......Plato and Aristotle, whose views on women and their "inferior natures," etc., I'm prepping for Tuesday's Women in Antiquity class.

4) Fortunately, things for Women Today have improved, or at least to the point that even the President skips out of meetings about his health care plan to attend his daughter's band recital.

5) Jim and I have both been devoting ourselves to keeping things as peaceable here as we might. Monday found us unable to resist another drive down to the ocean (a different spot than on Sunday). It was much warmer (high 30s) and Charlie was very game to run out across the snow, over the sand, and near the waves.

6) Those warmer temperatures were a signal of an impending storm, which led to a noticeable rise in the barometric pressure, which had something to do (along with just a brief period of video-watching on the computer) with Charlie crying out from a storm in his head, and spending half of a walk still crying and swinging his head. Considering all the disruptions to his schedule, I didn't think it going to be a completely "behavior-free" series of days.

7) I know we can muddle through one more unexpected day off of school for Charlie. But am sure hoping for at least a delayed opening for school---Charlie's anxieties about no school are pretty much contagious with Jim and me.

8) While our attention is obviously homeward directed, we always keep an eye on "the rest of the world. Jim and me both being professors, and me having gone through the tenure process just two years ago, we've been shaken by the deaths of three biology professors and the injuries to three more people at the University of Alabama Huntsville after another professor, neuroscientist Amy Bishop, is accused of shooting them at a faculty meeting. One blogger has speculated if Prof. Bishop might be "easily diagnosed with aspergers syndrome [sic]." Possible diagnosis of anyone is always a topic I'm very, very wary of, though I suspect this won't be the only time Asperger Syndrome may be mentioned in regard to what happened in Huntsville.

9) Still determined to keep trying to keep moving forward even when things feel so disjointed, after Charlie had watched one of the videos he likes (and has seen about a 100 too many times), I showed him a video of a lion dance competition in Malaysia and talked about him being part-Chinese and it being Chinese New Year, gong hay fat choy. Quite to my surprise, Charlie watched the whole video, with the volume turned down (those drums can be loud) and my partial translation of the male and female commentators' patter (Ta chiu-le. Gaoxing! Ta chiu, wo jie.....) Maybe tomorrow we'll take a look at Shen Xue's and Zhao Hongbo's gold medal performance (she does have the same last name as I do --- Zhao is the Mandarin pronunciation of Chew).

Or maybe we'll just watch another lion dance. Or the men's curling.

After something of a l-o-n-g weekend ourselves, I'm back to thinking of plans for the summer. No light bulb moments yet......

Mandarin sounds very musical, very different to Cantonese (at least it seems that way to me?). Dimitri likes different languages, and I think he is particularly attracted to the pitch and rhythm of Chinese. He may like the lion dances too as he loves drums!

Hope you are back to school rhythm soon, I think we all feel better when we have some idea of what's happening next, Charlie must be getting confused by now.

Kristina - coming on the heels of your comments about Amy Bishop and online diagnosis, I hesitate to raise this, but have you tracked Charlie's behavior when the barometer changes? Is there a pattern? If so, have you spoken to his physician?

I only ask because members of our family are acutely sensitive to ambient pressure changes and susceptible to pretty grueling headaches and sometimes migraines when the pressure shifts. Before I found a med that killed my migraines I considered weather changes with a certain amount of dread.
(Well, as someone once said, the worse vice is ad-vice, so I'm done with that.)

I have my fingers crossed for a late-start day and not an off day. Warm regards.

Point 9 about videos and dance and ice skating rings a bell here -- my little one has been watching the figure skating with a level of attention usually reserved for Baby Einstein videos. I wonder if for her it's the similarities with the background music and brightly-colored moving objects.

Bishop is a murderer first, and anything else secondarily. Just my 2 cents.

I love the pictures of Charlie at the beach.
Changes in barometric pressure definitely play a role in my migraine headaches, as well as the glare from the snow. Until I found the right medication (like Regina) I used to dread impending snowstorms. I still dread them because I hate driving in the snow ( my husband calls me a snow wimp) but now I have to worry about my two sons driving in it, too.
Snow days are made for video watching, and cooking. Does Charlie like to help you cook?
We used to do a lot of cooking when I taught my autistic teens. Homemade spaghetti sauce was a big favorite.

Barometric pressure is definitely a migraine trigger for me, too, and something more subtle that I think I can only compare to PMS. Neurological storm is a great phrase for it, if you don't mind borrowing, Kristina. When the pressure changes abruptly, I know I'm in for a miraine or something like a migraine without headache (all the aura and incredible emotional sensitivity and whininess without the headache). I would not be surprised if Charlie, who seems to be a bit stoic, is feeling something similar on top of the routine change anxiety. The snow glare is a trigger for me, too, Jill--any unexpectedly bright light!

The extremely bright glare from the sun shining on the snow has been tough on Charlie---twice he's had head-banging moments after the glare. Makes me think we should start to work on sunglasses?

HOORAY, he has school today, even though it's been snowing! He was one happy boy when we dropped him off.

@Regina, we've definitely tracked the changes in barometric pressure with Charlie's behaviors. Doctors have always been dubious at the link. However, we've been learning to be "on the alert" now with Charlie---I made the mistake of showing him the videos after a walk, thinking that he'd be all "walked out." Turned out he needed another go round the neighborhood and I suspect (feeling a bit 'duh') that video-watching is the last thing he needs when he's got something like a migraine coming on? Must ask the doctor about the migraines for sure.