Home Archives Profile Subscribe
Just What We Want
Goings On: New DSQ on neurodiversity and a few more words from Charlie 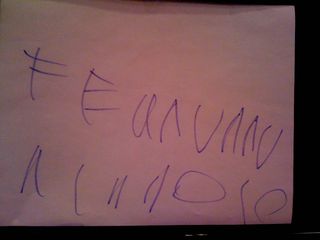 I suppose it's no surprise that we went to the beach on Sunday, as we've been going down there most weekends this winter. Perhaps in anticipation, Charlie woke up around 7.30am and was raring to go at 8am. We weren't and Charlie---swimsuit clad and boogie board loaded into the trunk of the white car---managed the wait well.

We had a happy ride down and, fortified by fare from the Golden Arches, Charlie walked though some hilly dunes over ice, slush and sand, to the beach. 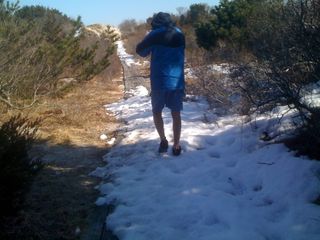 The ocean was flat as a table (direct quote from Jim) and a magnificent blue. We ran into a few other beach walkers and 3 dogs (2 unleashed---these were very small and not interested in tall boys, fortunately). However, no one but Charlie was properly attired for the beach, in the swimsuit department. 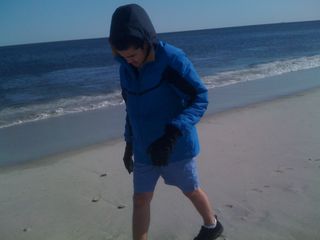 (The boogie board remained by the white car.)

I've written tons about Charlie's love of the ocean and how he seems more himself, freer, more "able," there. There's something about these trips to the beach in the winter that seems "echt Charlie." "Echt"  being German for "genuine," as in "the genuine article"---nothing fake or counterfeit here. It's not just that Charlie (and Jim and I) love the beach. But going to the beach in the winter in the "off season," because Charlie (and we) feel so very at home there, is kind of what life with Charlie (in Autismland) is all about. And Charlie puts even more of his own stamp on the experience by not huddling up in a parka and sheepskin-lined boots and heavy pants. He does wear the parka (over his fleece jacket, same as he does on walks at home) but he's wearing the exact same shoes and socks (in the sizes he's now fitting) as he does in the summer and, of course, his swimsuit. Yes, we have tried to have Charlie wear snowboots and galoshes. He's kept those on for a few minutes and then changed back into his black shoes.

As for the swimsuit: I'm assuming Charlie's legs below the knee were kinda cold, but he was smiling away and apparently could have cared less. Just in case, I carried his long pants and a change of socks. 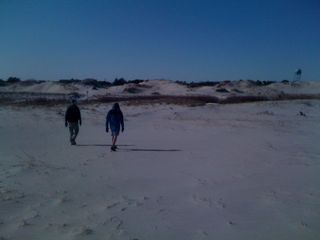 Note to self: Bring a change of shoes next time, as Charlie went straight through an icy, sandy pool on the walk back through the dunes. He didn't seem to mind having to walk back in soaking wet sandy shoes. Suspecting that he'd just put them on over his dry socks, I made sure to place them in the trunk and Charlie was ok with that.

It's not so easy getting Charlie not to do things as he's always wont to. I always know he wants to stay at home and just hang out when he takes off his shoes and socks; he doesn't always take off his shoes when he's at home and that says to me, he still has some energy and inclination to go out. His need for order can get in the way his better interests---wouldn't have been too good for him to wear home cold, wet, sandy, soggy shoes. And so raising Charlie often means a dance between accommodating and adapting ourselves to suit his "order," and nudging him in the way of letting go a little.

Saturday night at our friends' house, I watched a film called "Breaking Boundaries: The Art of Alex Masket"; the filmmaker, Dennis Connors, was one of the guests at our friends'. (Jim didn't get to see the film: He kindly insisted that I watch it and took Charlie on a spin in the white car.)

Alex uses stickers of letters and numbers, markers, Legos, duct tape, and other materials to make art, some of which you can see here. One gallery owner interviewed in the film noted that Alex's work has a kind of "visual music" and, I think, this phrase describes the vivid sense of pattern---created through colors and shapes---in his work. I met Alex's mother, Elaine Masket, a few years ago at a listening tour at the offices of Senator Robert Menendez and I can't say how much I admired how fervent advocacy, and her honesty about her worries about what is going to happen to Alex (who was just about to turn 21 at the time, and therefore to transition out of school). I didn't realize Alex is an artist; while Charlie remains not terribly inclined towards art, Alex's use of colors and shapes and his ordering of these on a flat surface reminds me very much of how Charlie seems to order his world. 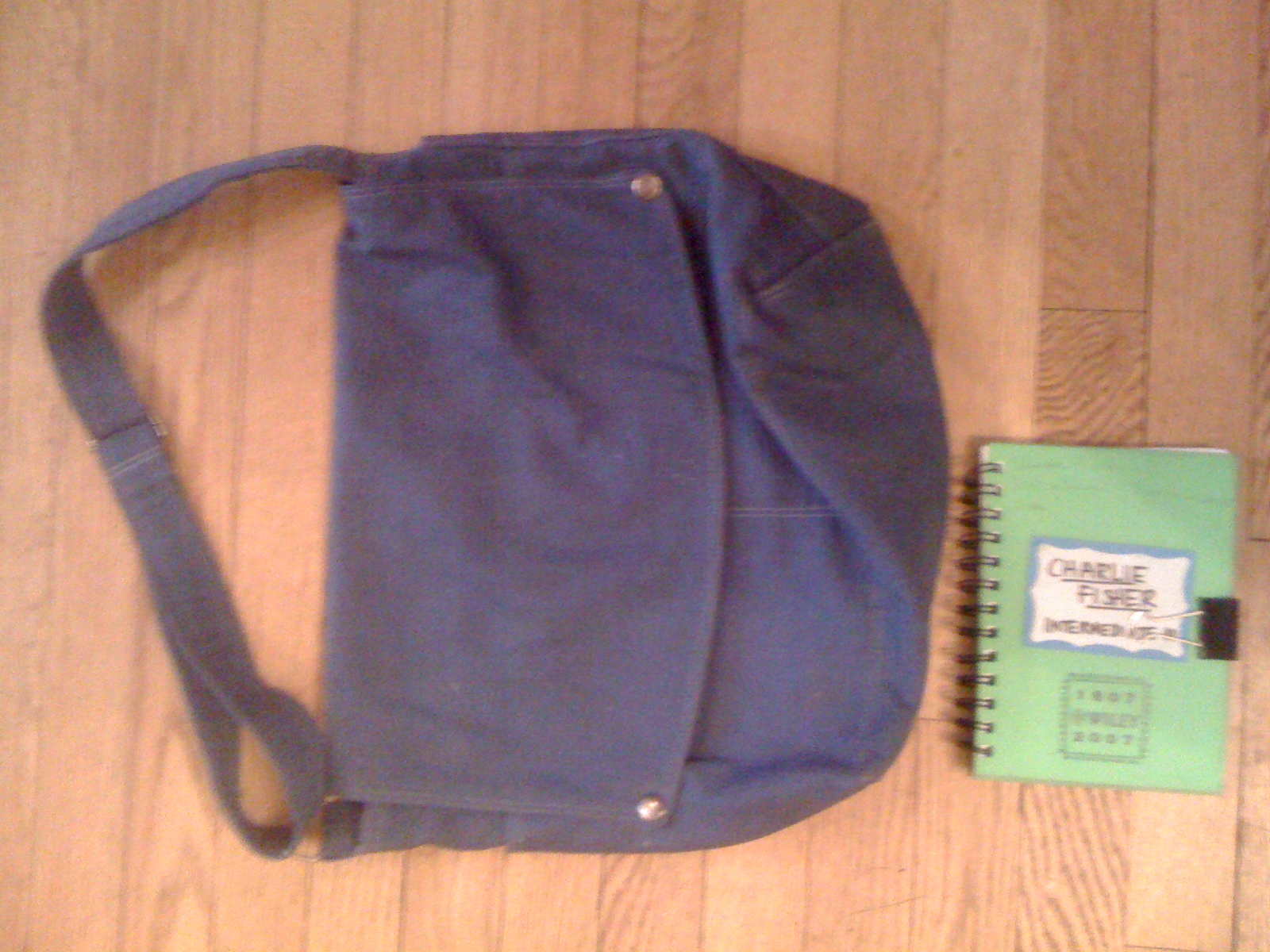 Here, his blue bookbag and the little green notebook that his teacher and I write back and forth to each other in.

And as far as expressing who he is in ways other than verbally: What else is Charlie, swimsuited up, at the ocean on a late February afternoon? 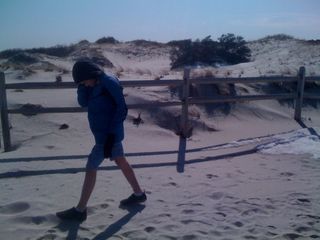 Hmmn. Charlie being a young man of fixed views, he may not go for this, but what if you kept some lengths of fleece in the car for the post-walk drives?

From time to time I happen to pass by our local fabric store chain and buy fleece remnants of at least 2 yards in acceptable colors. They're handy as spare proto-blankets and so on.

Of course, given Charlie's size, you may have to shell out for non-remnant 3 yard lengths, but even then it's not so expensive.

I can almost smell the beach. There is no sent on earth equal to it.