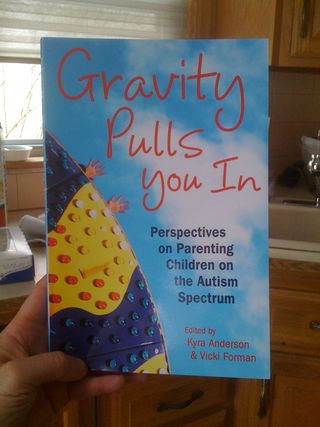 Gravity Pulls You In: Perspectives on Parenting Children on the Autism Spectrum, edited by Kyra Anderson and Vicki Forman, just published by Woodbine Press. And containing the writing of many parents, some of whom I've had the good fortune actually to meet and share a meal with (Vicki herself, Bruce Mills---we've met his wife and children Sara and Jacob too, Ralph Savarese, MothersVox, Kristen Spina, Barbara Crooker).

I've yet to meet Kyra in person. And also Mary, Christine, Emily, and many others. I've been very fortunate to get to know these parents and their families through their writings and, in many cases, through their blogs. Mary's blog was one of the first I read when I started blogging back in June of 2005 and I still remember the little frisson I felt on reading about her boy Bud and thinking, a mom like me! and she writes about it!. And then a long day  seemed less so, even though it was but 3.00pm and Charlie and I had already done summer school, a trip to the store, a trip to the playground, a trip to the pool and were now relieved to be back in the safe, if isolating, confines of our house.

Wanting, needing, to reach out to other families who have a child like Charlie, to individuals on the spectrum, and sharing stories about our long road of a life with our boy: That's why I got started blogging. A few too many posts on vaccines aside, it's remained why I keep writing here.

I want to write more about all the writing in Gravity Pulls You In, once I read through and reflect on all the pieces. A quick read here and there has revealed many sparks, many experiences that I know will ring too true with ours. My little piece is entitled "The Wages of Autism" and is stitched together from some of my favorite posts on my old "Autismland" blog, "The Wages of Autism," "Autism Hearts Club," "Ache." As you can gather from those titles, it's an essay about love and loss, and about the curious currency a parent finds herself gifted with in raising a child who, like Charlie, is different.

Valentine's Day having just passed, it seems more than appropriate that I just got my copy of Gravity Pulls You In. I reference "love of the Valentine's Day sort" at the start of my essay, in the context of an Intermediate Latin class I taught in the spring of 2006. There were only three students, all female, in that class, and our translating of one of Cicero's orations on the Catilinarian conspiracy de-, or rather e-, volved into a musing on the god the ancient poet Sappho called "Eros the Bittersweet."

Life raising a child with as many challenges as Charlie can indeed be  "bittersweet," tinged with moments too lovely and beautiful, and others that are pretty, very difficult. I wish some things---many things---could have been easier for Charlie. Wish we could figure out how to quell the neurological stormsin his head more quickly, more effectively. Wish he'd hit puberty laterather than early and been a skinny guy who Jim could still piggy back in the odd moment.

But we never, ever, wish for a boy other than Charlie to call our son.

It's been four years since I wrote the blog posts that became my essay. We live again in the house in which I wrote them. Charlie goes to a different school----a "separate" school, for autistic children---now. He's almost as tall as Jim.

After snow days and a long weekend, the three of us were not happy to find it snowing Monday night and Tuesday morning. But no text declaring "school is closed" appeared on my phone and so up to the Big Autism Center we headed at 8am. Jim's figured out a new route that avoids a major road-work-traffic-jam-creating-snarl; now we drive through some woody hills. Thanks to said snow, it was something of a winter wonderland, the tree branches trimmed in fresh snow. Charlie was already glowing at the prospect of School! and he remained that way on telling us "this way, this way," as drove into the school's (large) parking lot. An aide who's not in Charlie's class appeared and asked if it was ok for him to take Charlie to his room and Charlie went right in.

Great day, with a random yelp here or there---something new Charlie's been doing, that (we hope) is serving as an occasional "replacement behavior" for other ways to express his pent-up feelings. After school, we shopped, went to Walgreen's, walked (Charlie really wanted to snack first, but he ended up being fine getting in some exercise beforehand). He told me "dad here, dad here" when I explained Jim had to work late in his office. My own mind was swimming amid planning an information session on scholarships for Thursday, more preparations (like insurance and passports) for the Greece trip and a meeting with students (today), a recommendation to write. And then Charlie, after taking himself to bed at 7pm, wanted a walk at 8.15pm.

It was cold and windy walking across the snow-packed field and the word gravity, gravity, kept entering my thoughts.

as Kyra wrote in her Preface.

This low-gravity parenting journey has me floating in space, sometimes feeling light years away from the known or the familiar. And yet, as I move into the vast expanse before me, I only need to look to Bud for a cue to reorient and realign my orbit....... (p. 82)

as Mom-NOS writes in "Live via Satellite: A Parenting Journey."

How grounded we are because we're on this long road with Charlie, Jim and I know, down to the soles of our shoes all snowy and muddy from round-the-clock walks. How, too, glad we are to have this grounding. Often when I'm so tired I don't think I can do one more thing, knowing I need to be there for Charlie, knowing Jim's always ready to spring up to go out with Charlie, I find I have veins of energy I hadn't known I could tap into.

The three students I wrote about in "The Wages of Autism" are gone from my college, one having transferred after only a year;  one now in graduate school; one teaching full-time and engaged. Yesterday morning I was teaching another Intermediate Latin class, with three students (one young woman, two young men). I had asked how the long weekend had been. "Over," said one student and we all opened our books to the story of Orpheus and Eurydice as told by the Roman poet Ovid in his Metamorphoses.

We paused over a sentence with the word gravior, the comparative degree form of gravis, "serious, heavy, weighty," the students noted the definitions.

"Graver," one student (the student who'd said "over") answered, almost under his breath.

"So heavier, serious-er," said another student, as she wrote in her notebook.

Yes, being the mother of a child like Charlie does mean life is gravior for me than in the days when I first read Ovid, and Cicero, and Sappho, and worried about not having a date on Valentine's Day or the calculus test tomorrow.

And the strange and lovely thing is, this gravior life rests lighter on our shoulders. Even when the ground shakes, we know how to shift our weight to sway so that, while we may fall a little, we're still standing. 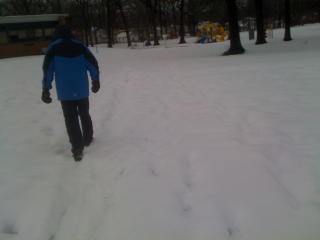 Lovely post - even though this life may be weightier than others, I don't know what I'd do without it, it's what keeps me grounded. Hope I get to read the book soon.

I pre-ordered the book. My piece needed to be edited the week I was going into mediation for my divorce. I was sorry I wasn't able to make the deadline but am so excited to read the works contributed by others.

just breathtaking, kristina! thank you so much for this beautiful piece!

i am very much pr-sold on this one. two of my favorite writers, kristin and kyra, all in one place...too much. can't wait to get my copy. and very excited to learn about the other writers, see their perspective, stories.

congratulations on this, it's going to be so beneficial for so many people.

@Estee,
Wish you were in the book, then it'd be even more full of friends......Will you post (have you already posted?) what you had submitted? Or will the piece be published elsewhere?

@kyra, thank YOU and Vicki for putting together the book!

@M, I await your responses and thoughts!

@Emma, I'm grateful to be grounded---people don't believe me, but I really get so much more done while having to take care of Charlie. Guess that is what grounding can do for one.

we missed having you, estee! maybe there'll be a Gravity II ??