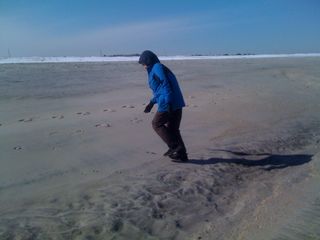 I was checking the passports of the students who are going to Greece with me yesterday and did a little double take on reading the above.

1997 was the year Charlie was born, meaning he's now less than a decade younger than many of my college students. I know that's stating the obvious, but it's a realization that makes me feel like an era is passing, or has passed, and we've entered a new one.

Going, or rather gone, is the time when it was possible to talk about some cute thing or other that Charlie did (as when he pretended to make rice in a pot on the stove---as I said, pretended, he does NOT know how to turn the stove on, um, yet), or when I could bring in some K'nex or a stuffed Stitch to use as props while demonstrating some grammatical concept or other, while noting in passing that I'd pillaged Charlie's toybox to make a little Latin more edu-taining.

Charlie has himself put away his childish things--stuffed animals, a giraffe slinky---into a bin in the basement. As frequently noted, he swaps shoes with Jim and looks eye to eye with many adults, my students included. Back in my first year of teaching at Saint Peter's College, I once brought a sick Charlie to Latin class with me. He was so weary he assented to sitting at a table in the front row (looking appropriately puzzled). In the midst of me explaining the fourth declension of nouns I heard "Dr. Chew! He's asleep!" "Charlie's sleeping!" (At which moment, the obvious occurred to me: The students had all been watching Charlie, who cares about us, us, ui, um, u.).

Now it's not possible, period, to bring Charlie to a class. He certainly blends in among the students, height-wise, and with his droopy-drawered pants (though Charlie's aren't, admittedly, dropping as a fashion statement). He 's much more definite, and able to articulate, what he wants to do. Sitting in classrooms with hard plastic desks and chairs while police cars' sirens blare below and his mother talks way too much: This, I am quite sure, would add to a "no, no" from Charlie.

And I think, before too long, Charlie will be the same age as my students.

Already, when I've mentioned Charlie (as I inevitably do when I'm teaching), I've noted a change in what I've been saying. For all that Charlie's educational trajectory is very different, I have only to say "middle school is no fun" and I can just detect a little shudder, a shake of the shoulders, as if my students, who were just adolescents a few years ago, are trying to rid themselves of memories as painful and confusing as Charlie's been going through. My students, I've realized, are now much closer in age and experience to things that Charlie has been living through.

I've been asked if I feel a twinge to be teaching college students, all while knowing that my own child is not going to college. I did once but I don't anymore. Rather, I've come to appreciate my job more and more (and wrote about this recently at Care2.com). It's not simply that my job enables me to think about other things than autism, IEPs, next week's neurologist appointment, and the whole kit and caboodle. It is a cliché, but my students really have taught me a great deal. As they are so much closer in age to Charlie, they've indeed made me often aware of what being a kid in this day and age means.

Some like to make a big deal about how different Charlie and kids like him are from, well, my students, as Charlie's not going to be studying Latin, hanging out in the dorm and the caf, cramming for exams. Get away from these externals and there's more in common than you might think. Ok, my students did enjoy two snow days and a holiday, and no class, something more than Charlie did. They do have an appreciation (sometimes unspoken) for order; we have a weekly quiz every Thursday in Elementary Latin and some students have acknowledged they like knowing, Thursday = Quiz day (rather than having to worry about a dreaded pop quiz). Constant sleepiness seems an eternal feature of tween, teen, and early-20-something-ness. "Will he be able to get a job?" is something that Jim and I aren't the only parents to worry about (and it is, of course, a worry for college students too).

And like any parent, I often just feel all I can do is to stand back and behold what my child has grown into and let him run the path he's on.

It's a runner Charlie is growing to be, as Jim writes on The Irish Waterfront and as Jim witnessed on yesterday's after-school jaunt round the neighborhood, replete with "headlong flights through tunnels of shoveled snow." Charlie's been giving himself a workout of sprints and dashes we haven't asked him to. I'm sure he must be joying in the giddy feeling you get from motoring really really fast at top speed, and the thrill to know, I can go that fast. Yesterday's walk, following "another great day" (as his teacher wrote) at school, was enough to make for one worn-out boy who, after inhaling a burrito he'd specially requested ("green," for the guacamole), betook himself up to bed at 7.30pm.

Or maybe Charlie's needing more sleep because he's starting another growth spurt. Come to think of it, it's been awhile since the last one.

Posted at 21:11 in Adolescence & Teenagers, Growing Up, Motherhood, My Teaching/Job | Permalink | Comments (10)

I can't remember...does Charlie participate in Special Olympics? If he's getting into running, he might enjoy it. We have a great organization in our area- they do activities year-round, and they're pretty good about scheduling things that they know most of the kids will enjoy. Dylan was in it in swimming for a few years, and while he absolutely wasn't competitive (going down the length of the pool wasn't a goal for him), he loved it even with the noise.

A teenager, huh? Well, good luck, and remember not to freak out too much! :)

Sweet. Another all-star athlete among us!

I love the color thing. Thank you for being so descriptive!

I did a double-take when I saw the title...a teenager?! The time goes so swiftly, doesn't it?

I love that I am seeing such a positive, forward-moving trend to your posts about Charlie and his activities, his learning, his communication. Such wonderful stuff to read!

Been there recently ... having a son turn 13. Only five years ago! And at least another five to go. Boys don't get out of adolescence until approxinmately 23. You'll be hearing "no no" a lot over the next decade.

What the other cohort mothers and I noted was that 13 isn't really as "adolescent" as 15. That's when all the tendencies that are only starting at 13 - the isolation in one's room, the primal privacy demands, the constant hunger, the hormonally disregulated bursts of affront at harmless things, dismissal of parental guidance - become entrenched and daily.

So the time to teach Charlie how to shave is now, when he will still listen. The crucial thing to teach (aside from not cutting himself, and how to use a styptic pencil) is to get all the whisker shavings cleaned up. Otherwise you have a decade's enjoyment of a sink festooned with soapy little hairs.

And, whatever you do, never reminisce in his presence about all the cute things Charlie "used to do."

Our sons are only weeks apart. Their autism is different as much as any pre-teen is different from another. I approach this new stage with trepidation. There is no father to help teach shaving or be strong enough to control Andy should he decide to use his strength. I come to your blog for kinship as well as just learning more about Charlie and his family.

I not ready to be the parent of a teen-Agee
anymore than I was ready to be a parent of 2 boys with autsim. But life is what it is. Thanks for being here and sharing.

Time and Tide wait for no man.

I had my "we're not in Kansas anymore" moment the day I had to buy my daughter some "grown up" undergarments and consider some other lady-related things. That was an occasion which had me reflecting for a while. (BTW- she was jazzed. I was feeling a little old and missing the little girl who was still there, and yet not. But there it is.)

13, so far, is fine...knock on wood...but I'm not counting on anything remaining the same; too much has changed already.

@Jen, Charlie doesn't participate in Special Olympics. We tried swimming in our previous town's Y and got a not very welcoming response. I think we'll try to work on running first with Charlie and then seek out Special Olympics......inspired by hearing about Dylan!

Thanks, Sharon, Moi, Louise, NIksmom, Callista, Rose---though I have this tall guy now inhabiting our house, he still has that same sweet smile as when he was a babe.

@Regina, I'm trying hard to see puberty as "yet another stage of the adventure." No changes in what Charlie wears, just everything is a lot bigger......men's sizes.....

I know, it's pretty amazing. You think we'd anticipate, even when they're little, and it still comes as something of a shazam.

I'll be real interested in how the running works out for Charlie if you take it on seriously. Something with pitching and catching would be in with our girl's aptitudes, but I have some reservations about killing the golden goose with an organized sport involving too many rules.