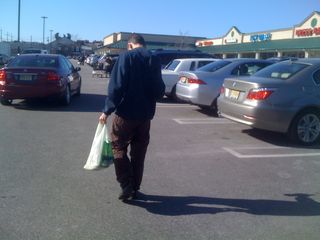 Sunday was fireworks-less in our household. Charlie slept in a little (till 8am). We did walks (2---short and long) and rides (3---school, grocery store, Jersey City so I could retrieve some items from my office). Charlie used the computer---his typing is getting much better and a little faster, and he seems at long last to be distinguishing between the "I" key and the "L" key---and was eager to find, via Google Search, images of long-gone toys (and he was positively tickled pink when I found a 4 minute video of a green and blue Leapfrog Leap Pad like the one he used to have). All that good exercise in 20-degree or so weather stoked his appetite and he was in bed, and asleep, before 7pm.

(This does bode an early wake-up, but I'd rather be up earlier rather than running around to get things ready in his lunchbox and for teaching, so that's as well.)

It was a plain and simple nice day. Granted, we didn't do anything controversial or out of the ordinary. But there's something to be said for learning how to be, quietly, peaceably.

Lest you're wondering or lest you're not: Jim and I completely and utterly enjoy our walks with Charlie, especially the long ones. Jim and I both get a lot of good thinking done out there and Charlie returns from these walks not at all fatigued, but for sure relaxed and ready to sit down and just hang on his own. I'm starting to see our neighborhood, and the neighborhoods we're venturing into (it is a 4 1/2 mile walk so we end up in walking briefly in two other towns), merely as extensions of our yard (and I wonder if Charlie sees it that way too, somewhat?). Jim (as he'll tell you himself) has ADHD and, while I don't want entirely to speak for him, regularly attests to the need for him to be in motion, to get his thinking and doing going.

I'm the antithesis of ADHD, you might say----I do like the walks, but I get as much done sitting at a desk for hours on hours.

All that said, Jim would (if I may again speak for him...) also note that it was a quite significant effort for him to write his book, On the Irish Waterfront. The book took over ten years to write in part because Jim kept interrupting his work to run out and ride bikes with Charlie; because he had not mountains, but a mountain range of primary documents, to read through to piece together the story. He got another mention in the New York Times by Sam Roberts over the weekend, in

Long before “Sex and the City,” Mr. Big was Bill McCormack, who ran a stevedoring company and was billed as the boss of the waterfront. In “On the Irish Waterfront: The Crusader, the Movie and the Soul of the Port of New York” (Cornell University Press, $29.95), James T. Fisher dissects the way labor and business wielded power on the docks in the 1940s and ’50s. If you have seen the film “On the Waterfront,” you have gotten the gist of it. Professor Fisher, who teaches at Fordham, amply fills in the gaps among organized crime, public officials and the street priests and Catholic hierarchy.

And, not that you really want to read another post about Andrew Wakefield, the General Medical Council, vaccines and all that---here I am on Vaccines, Autism, Bad Research And The Damage Wrought By Andrew Wakefield at Care2.com. It was in February of 1998 that Andrew Wakefield and two other doctors at the Royal Free Hospital in London published a paper in the Lancet medical journal, that, drawing on case studies of only eight children, said that the measles vaccine might be linked to inflammatory bowel disease, and that this might be connected to autism; when Wakefield announced at a press conference that he thought the measles, mumps and rubella vaccines in the MMR vaccine "should not be given in one combined shot, but in single doses, preferably a year apart," he sparked an international scare about the MMR vaccine that we are still feeling the effects of. Indeed, for all the years of Charlie's life and after his being diagnosed with autism, we've been hearing about vaccines and Wakefield etc..

Gently peaceful Sundays likes yesterday don't make for attention-grabbing headlines or colorful tales but ok by me to leave such for the history books.

"It was a plain and simple nice day. Granted, we didn't do anything controversial or out of the ordinary. But there's something to be said for learning how to be, quietly, peaceably."

To be frank, those are my favorites [Our internet service died a day - bliss]. Out of the ordinary? Okay on occasion to spice things up. Controversy?? (grin)

Take care and hope it's a good day.

We enjoy our walks as well. We don't get quite as far as you, only averaging about a mile or so each time, but we certainly all enjoy getting out in the fresh air and moving around. Patrick is anxiously awaiting the return of bike season, however, and asks almost every time we go for a walk if we can ride.

You could always get a Bluetooth headset, and talk on the phone like all those people I think are talking to themselves in the supermarket. On second thought, it sounds like quite an aerobic workout to go walking with Charlie, so phonecalls might be a bit breathless.

But one useful device would be a small handhel voice recorder, to not all the good ideas that pop into one's head during exercise.

Peripatetic thinking has always been a powerful intellectual tool, as you know, from Aristotle to the famous (at the time) "Sunday Tramps" of the Victorian period.

As long as we---not just the media---keep, as it were, perseverating on the "vaccine issue,"

It was a good piece. I'm surprised at the number folks who have responded to the Wakefield decision, who don't usually address autism or the anti-vaccination movement.

Glad you had a peaceful Sunday.

I find the most interesting thing about the GMC decision is that the question was one that turned on research ethics, and yet that's not what's (in most cases) the emphasis of the discussion, which as far as I can tell is the same-old, same-old as was the day before the decision and the day before that...seems as if no matter what the larger context might be or the actual topic, the Sd or conditioned stimulus of "vaccine" is the trigger for steering things around to the usual heated discussions on the same items that at least as I have seen, do not reach resolution through sometimes hundreds of comments (and possibly into many thousands cumulatively). (And I hope saying the word here doesn't also do so).

We've been walking too, although no where near 4 1/2 miles but a couple of miles is enough to put on the baseball hats, walking shoes and headphones and then stop at Starbucks afterwards like a couple of civilized ladies. (smile)

I always hesitate before writing about vaccines.....am about to step aside quietly now, hopefully until April when the GMC makes its decision. It doesn't really feel that the online discussion about this particular topic has changed too much over the years; it always seems to descend into anger about "big Pharma" and the like at the mere mention of that Sd 'vaccine' (though it seems to me that the old Sd of 'mercury' has been heard less of late).

Am spoiled with my iPhone and its typing and other capacities! Have been known to send out an email or two while walking, or waiting on Charlie.

We, along with Patrick, cannot wait for the return of bike ride weather either!

I could go for the coffee! But I'm only the imbiber of such in our household...... Charlie, it seems, is all business and no café-sitting on these walks.

Charlie's definitely power-walking and more power to him (and you) because that's a lot of good exercise, but if it should ever change that a little refreshment break sounds good, the "coffee empire" does a nice non-caffinated caramel apple spice (cheaper at home, but we're working on the ordering and on occasion it's just kind of festive).