Not All Who Wander Are Lost 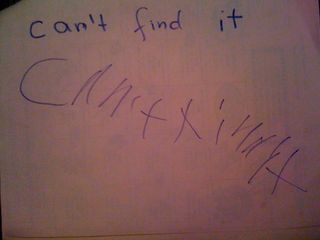 I've been pulling out this piece of paper upon which Charlie wrote "can't find it" at intervals as we use the laptop. He's chiefly interested in going to YouTube.com or Google search to watch tv shows from his (gulp) early (Charlie will be thirteen in just about four months---oh, my, ........) childhood, or to see photos of toys that he used to have: a game called Farm Families, a VTech laptop, and the original LeapBook from Leapfrog.

I was relieved when Charlie started getting interested in searching for the toys. With a little finessing with one's search terms, most anything toy-wise, CD-wise, video/DVD-wise, created in the past 12 1/2 plus years can be found on the Internet. (For instance, typing "Farm Families" only gets us one photo of the box of that game, but type in "Farm Families Milton Bradley" and there's a few more photos for Charlie to peruse). Videos of kid tv shows are the dangest thing to find, thanks to copyright restrictions. I mean, of course I know that these are necessary (and I even found myself downloading---a bit ironically?---a copy of a book about piracy and the "intellectual property wars" the other day). But explaining to Charlie why one day there was a video he's watched for the past few months on YouTube and the next it was gone "due to copyright restrictions," pulls at the parental creative juices.

In the past, I would tell Charlie "that one's not available" (a phrase that sounded stiff and "huh?" to me) and then "we can't find it." At some point or other, the latter words hit a quite raw nerve in Charlie, and hearing "can't find it" garnered a response equivalent to another bugaboo phrase, "broken." Hearing that something was lost or irredeemably beyond repair, bothered Charlie to distraction and, sometimes and ultimately, "behavioring." It was only in the past few months that---maybe in hopeful consideration of Charlie getting, as he indeed is, older and more mature---that I decided to address the delicate issues of "can't find it" and "broken" head-on. First I deliberately said those words but just once, in a clear and steady, and matter-of-fact voice, in a (very hopeful, possibly vain) attempt to help Charlie think of these concepts as part of (for lack of a better expression) the natural order of things.

And over the past few weeks, I've had him write "can't find it" and "can't find them" a couple of times and have referred back to the above-photographed sheet. Somehow me doing so, and pointing to the words (mine and Charlie's) as I say them with Charlie repeating, makes the notion of "can't find that video clip anymore" not something to get too overwrought about.

Charlie might say "broken" over and over (getting more enervated with each utterance), or pronounce "can't find it" in arch tones of distress. I used to try to divert him, very unsuccessfully, from saying those words over and over, thinking that I would "take his mind" off those thoughts. I suspect now that I only made his worries worse: The more I tried to pull, the deeper in he sunk in a quicksand of words mixed with thoughts mixed with strong feelings.

Again, words on paper (especially words he has written) seem to have a special power for and on Charlie such that, after a few rounds of requests, he stops asking for those unfindable videos.

Except of course, last night---by merely having Charlie type into Google search rather than YouTube and click-roaming here and there---we found the videos, or at least trailers and snippets of them, on IMDB and MySpace.

At which point, alls one can say is ηυρηκα, right? 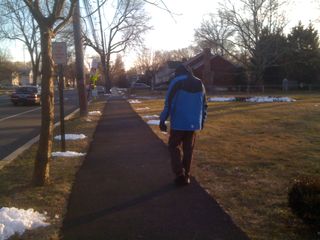 "no batteries" is another one we have a problem with.

Dimitri still gets distressed at "broken" and other such things (he will be 10 on Monday - still young, but where did the time go!?!), but these moments pass very quickly for us (30 seconds to a minute) although there maybe some throwing or biting. However ,what does happen is Dimitri will apparently let something pass only to return to the subject 20 minutes later.....

The head on and matter of fact approach seems like the best one to me. And Charlie sure seems to be maturing so much recently.

There are 4 kids video sites suggested here which might be helpful for finding some of the ones Charlie is remembering.

I can't remember - was "goodnight moon" one of Charlie's fav's? Just found it here

Yes it is (G Moon that is)---thanks! part of the video (the animation of the book) is on YouTube but I'm always thinking they might take it down.

thanks for all the sites, I also meant to say----Charlie doesn't have any toys at the moment that need batteries but I think the "no batteries" problem may be one reason we let those toys go. Though there are plenty of places around here that are open 24 hours and that sell batteries, if need be!

This is wonderful news. Charlie relates to Language like my son. Because of poor auditory processing, gaps in Language (not just speech)and a painful history of missed communication with speech, the quiet written words are at times a balm. Yes! "Broken" and "lost" are harsh concepts for beloved things. We use the gentler idea of "resting" as in, "The Astronomy DVDs are resting now."
How lovely that our resting memories can be retrieved from cyperspace. Thanks for this fascinating post.

My husband and I are both lawyers. You'd think that we'd be able to explain copyrights and copyright infringement pretty well but when our kids were little we had a devil of a time getting the concept across to them.
We finally succeeded and by the time they were about seven or so all three of them understood the concept. My daughter even went through a couple of weeks when she drew the copyright symbol after her name on school papers.
Not that we are a family obsessed with copyrights but children like "stuff" and a lot of the stuff they like is protected by copyright.
A few times when we were walking around in Manhattan we encountered street vendors selling knockoff watches, purses and the like. My older son was about 12 when he HAD to have a Rolex watch and boy did we struggle explaining why the watches that the nice man was selling on the street weren't REAL Rolex and why it was wrong to buy one.
Yeah, copyrights can drive parents around the bend.

@Sarah,
I am liking "resting" very much---and the written word as a balm, that's long been the case for myself and I am thrilled to see it be the case for Charlie.

@Jill,
still chuckling over your daughter adding the copyright symbol after her name.....

sometimes writing it down is all it takes...and I find it relieves my stess of having to say it over and over and over...I just point. Though paper sometimes does get ripped, chalk board and dry ease boards get erased...