Of Books and Letters 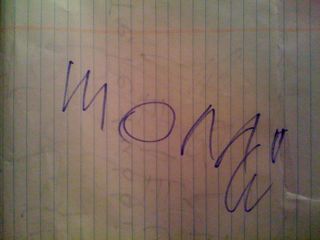 One of my cousins had a little girl over a year ago. He sends me photos and updates about her regularly and I am (finally, at long last, and way overdue) packaging up some books to send her. They are old books of Charlie's, story books, nursery rhymes, one with geometric shapes and patterns. All were read to Charlie at some point or another; I can't say for sure about Charlie himself reading them. I can count the number of books on one hand that have interested Charlie enough for us to come upon him turning the pages on his own and it's been many years since he did even that.

And we have a lot of books here, shelves and shelves in the dining room, the living room, and all around, not to mention what's in the Jim's and my respective offices. Some of their shelves do contains picture books, board books, those DK books with the crisp and clear photos, story books. I've had a hard time letting go of any of them, always hoping that someday, one day, Charlie could read them.

I remain hopeful, for all that Charlie will be 13 in May and still has yet really to read a book. He used to turn the pages of Goodnight Moon while reciting what each page said, but I'd have to say this was mostly due to his having memorized much of the book, thanks to multiple readings---this was the one book he regularly wanted to hear read out loud---and he had a tape of the book that he (and we) listened to over and over. Efforts to interest him in his other books, and in ones from the library, were not successful and became increasingly trying (and a lot of pages got ripped and taped up, leading to a phase of Charlie being exceedingly fascinated with asking me to apply wads of Scotch tape on the torn paper).

Needless to say, Charlie's recent willingness to write has been something heartening. I've been sometimes going over the words and phrases on a growing pile of pads and pieces of paper, a couple of days after he's written them. When I've sensed Charlie getting agitated because we can't find a video or toy he wants to see on the Internet, I've pointed to a phrase we wrote together: "We can't find it." Somehow seeing the words, and the words he wrote, seems to help. Maybe putting the threatening notion of "can't find it" down on paper--giving it concrete form---is making the whole idea of "can't find it" seem more manageable, less amorphous and scary?

Charlie may not be reading words but he seems to have much more understanding of what words, and in particular the written word, can do. Monday night I tried a variation on writing a word and having him copy it; I dictated "M-o-n-d-a-y" and he wrote each letter, slowly and clearly listening. As he wrote, I thought about how "Monday" in our household has become more and more a day lacking the negative connotations popularly affixed to it. Charlie looks forward to Monday because it means back to school, back to routines, back to a predictable and familiar way to fill the space of a day after the looser-ness of Saturday and Sunday.

While last Monday got a little crazy (I forgot to put Charlie's bookbag in the car; it was the first day Jim both drove Charlie to school and picked him up, and that I worked late; the weather brought a downpour, raging wind, and warmer temps all in a few hours), this Monday was almost clockwork. Charlie was up by 7.30am. He and Jim dropped me off at the train. Charlie was happy going into school, suddenly upset in morning circle, soon over it, and the aide told Jim when he drove up at the end of the day that Charlie'd done very well that day. Jim and Charlie went on a long walk and were still out when I came back home. Charlie was still game to go out for a ride and to make brownies. Between sessions on the computer, we talked about how, in addition to being Monday, it's a new month, February. 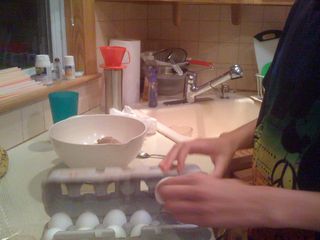 One of the books I'm sending to my cousin's little daughter is a Miss Spider ABC book. I'd hung onto it, wanting to keep it until Charlie knew every letter. He does still say "p" when he sees a "b" or a "d" and types "t" when I say "i." We've got a way to go with Charlie forming the round and straight parts of those first three letters (and with a couple other letters like "y" and spacing his letters out) but he definitely knows you dot your i's and cross your t's.

It feels really good, at long last, to say that.

I have the same problem letting go of books and toys too, usually I only give in when they are really tattered or broken :)

I also love the pads and pieces of paper filled with words. Charlie's understanding that written words have meaning is a great step.

You've got me thinking about audio books for Dimitri, I may give them a try.

Nice job on that writing, and I enjoyed hearing about Charlie's fastidiousness to writing that M-O-N-D-A-Y. (smile). I'm glad if the written word is giving him something to get anchored to when the spoken may not be doing the job.

Don't lose heart on those books...my older daughter [early and voracious reader] had mountains of books and I've at times cast kind of a wondering look thinking about whether this plugging away was going to pay off and if my younger daughter was going to enjoy those as much as her sister had. Then the other night she selected "Catwings" from the bookshelf (a gift from a relative). "Are you sure?"

So we spent a nice half hour reading some of it together and talking about the pictures. I would not have anticipated this even a year ago.

Love those capable hands in the eggs. Hands of a teenager!

Nik has suddenly surprised me with an interest in some of his books I had thought werre a lost cause. Even on the LeapPad, he's now actually LOOKING at the pages instead of just pressing randomly for the sounds they make.

I guess what I'm saying is that it seems Charlie's awareness of the written word as powerful and MEANINGFUL is sinking in. You never know what he might do with some of those books now. Maybe you could take Goodnight Moon and have him write it out?

Yes, as Linda said, thos are the hands of a teenager! They grow so darned fast!

The writing is great news. There are two parts of reading, one decoding the letters to form the words, and the second is comprehension. Many autistic children can do the former, but not the latter.

I have a friend with a son who can read just about anything aloud, but understands very little. This despite his understanding those very same words should they be spoken to him.

Would Charlie like a coffee-table type book with photos of the Jersey shore?

I've recommended coffee-table books to lots of parents because the focus isn't a difficult task (reading, as there is generally little to no text) but rather enjoying "reading."

Hmm, @Jennifer, now there's a thought........ just maybe one without _too_ many photos of the "Jersey Show reality tv show" type!

@Niksmom, Charlie has been very interested in seeing photos of his old, original Leap Pad, along with that YouTube video we found. I've thought of getting a used one (as we no longer have the original) and seeing what ha makes of it.

When I heard that one of the (much shorter) kids in his class is Charlie's age, my first response was, wow, that child is really unusually small for his age----guess perspective is all.

Kristina, I turned on the tv at 11.05, but must have missed it. Know where I could watch it?

It's interesting how our boys are similar
and different. My boys picked up reading and letters early, but took a long time to ride their
bikes.

My husband & I were athletic but neither boys shows much interest in sports (besides NASCAR) and would much rather get a new
book than toy.

Could the boys have been switched at birth? ;)