Home Archives Profile Subscribe
What's in those DSM revisions? in 'functioning levels'? in that big box Jim got?
Walk, Sprint, Run, Dash: We Do It Together

The Dao in the Snow 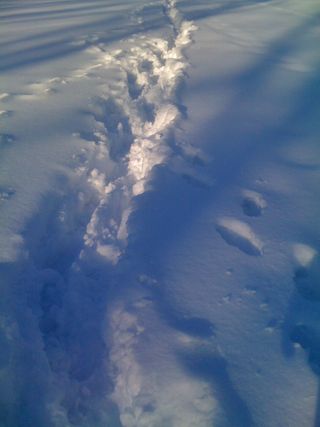 I picked up a happy Charlie from the Big Autism Center this afternoon and, as we drove home through residential streets and on the highway, I felt pleasantly relieved. It was so crystal clear what I had to do, what we were doing: Driving home in the car together after a good school day. There's a part of the ride that goes through some woods and hills and Charlie's smile was especially glowing, as was his whole face, as we passed through, the sun and sky bright.

He readily assented to "go for a walk" when we got home. It was much warmer, though not at all cold enough to melt the big ol' chunks of frozen snow piled on the sidewalk and on people's lawns (not that you could see these). When we came to the field where, for the past two days, we've been walking up past our knees (mine for sure, Charlie's almost), I realized that a bit of a path has been developing, thanks to the footprints of those who've been talking through the field (i.e., us). As I walked I kicked and stomped at the snow, flattening it out.

Charlie has his own reasons for walking in this or that part of the field and the thick snow has stymied him. He tries to walk in the part of the field that he wants to, but that means he's been getting socks and shoes full of ice chunks. So Charlie was first oblivious to my pointing out the path to him. Then, after about five minutes of breaking his way through the snow, I saw him moving over to the path, and then moving faster. And then, faster and faster, smiling at times.

It seems eons ago, but once I studied Chinese philosophy, in my junior year in college. While studying Taoism, the professor sought to explain the notion of the "way," the dao, by referring us to a patch of bushes and grass in front of the brick, gargoyle-adorned building where the East Asian Studies department was. Students and faculty and staff alike, everyone tended to walk a straight line from the pavement stones over the grass to the entrance. The trod-upon grass had become a path in its own right. And that, the professor, said, is the dao---not the path-in-the-grass itself so much as that everyone just sort of knew, that was how you were to walk, how you're to go. That "way."

And a way had come to appear through the snow in the field. It took Charlie longer to see it than it did me, but I guess you could say I've had a bit more practice trying to find the way amid obstacles, among which I count the various slings and arrows we've steeled ourselves to face in helping Charlie manage in the world. I know I won't always be here to smooth out the cold snow for him but I can try to point him, walk him, in the right direction.

Towards the right "way."

Lovely post, Kristina, and just what I needed today. Thank you.

The journey is the reward.

Kinda reminds me of Carlos Castaneda and finding ones spot on the floor.

Well never mind that here is a story about the Tao of Pooh and a true one at that.

"Whilom as tells the tale" it is told that the story of Winnie the Pooh was chalked upon the paving slabs between the East and Main sites of Warwick University.

That is close to where I used to wander invisible but not unheard in the darkness of the woods on either side of this path, playing my flute and losing myself in it.

I confess to never having read the Tao of Pooh. Did some walking in the snowy fields with the sun setting, with no one else around but us, and enjoyed the quiet (not that it was really quiet----it was just easier to hear all kinds of background noises, cars driving a couple of streets over and an airplane far above).

I continue to joy in the journey!