A Short Visit to an Old Haunt 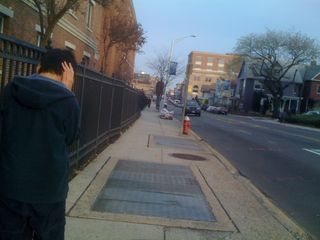 Jim gave a lecture at my college last night. Charlie had had another good day at school (only wearing the helmet now from 8.45 - 10am; liking art class) so, after filling the white car with gas, we headed onto the Garden State Parkway and over the Pulaski Skyway to Jersey City. I parked and Charlie told me "no stay in car," which was fine by me. We got out and, slowly, walked up Glenwood to JFK Boulevard, and thence to Bergen Avenue where there's a Vietnamese restaurant. I had called ahead and an order of two summer rolls was ready. Charlie carried the bag back across the Boulevard and to the lecture hall.

He's been there before, when Jim spoke at my college last fall. Charlie hesitated by the front row of seats and then sat down in the second row. Some of my students were there and Charlie said "hi" as they came over. He opened the styrofoam container with the summer rolls and asked for a Sprite.

I know there's a vending machine in the basement one floor down and as I was scheming how to go down there, one student came over and told me he could get Charlie a Sprite (a leftover from a reception earlier in the afternoon). He went off to get it and soon returned, Charlie saying "thank you" (as prodded by me) over his shoulder. After he'd eaten, Charlie kept craning his next back towards the entrance as I'd told him that we were waiting for Dad. Jim soon appeared and Charlie's face brightened. After a few more minutes, he stood up and, as pre-agreed, Charlie and I said a round of good-byes and left.

It was getting dark as we walked back to the car and drove off. It's quite a sight to drive over the Skyway and see all the lights of the Meadowlands and Newark Airport and Newark below and Charlie smiled big as he looked around. He hurried inside and asked to go to his room, and asked me to bring up a few things. I couldn't locate one item, only to find it semi-wrapped in the plastic bag holding the leftovers of the summer rolls. I brought the item up to Charlie and went back downstairs, and then spent a queasy half-hour listening to Charlie keening and crying and moaning.

The lag in operation, after some unusual occurrences: Wednesday's flat tire, being back in Jersey City walking around, my parents' departure on Tuesday?

Indeed, as Charlie (hands pressed over his ears---it's very noisy on the Boulevard, thanks to a constant stream of auto-police-ambulance-bus traffic) and I walked to the restaurant to get the summer rolls, I felt wistful, thinking of all the times---nearly every Friday, for two or more years---Charlie and I used to drive in to Jersey City, park the car, and walk down the Boulevard to Journal Square where we'd catch the PATH train. Sometimes we'd meet Jim at his office near Lincoln Center and get Whole Foods takeout. Other times Jim would meet us on Christopher Street and we'd walk through the Village to a different Whole Foods (Charlie always liked to help himself to a mega piece of carrot cake---for the frosting). After a long week walking up and down the one main street in our condo development, the city walks with so much going on at every corner, so many people, became a favorite thing.

Gradually over the past year, the noise, chaos and general unpredictability of city streets became too much for Charlie. Indeed, looking back, I suspect Charlie had started to become irked by the honking and shouting and revving of engines, not to mention the myriad sounds (clanks, wheezes, grunts, bangs) of the subway and PATH. I supposed I should be amazed that we lasted as long as we did on that journey.

And finding Charlie and me walking just a short strip of the Boulevard, just to get an order of spring rolls and hurry back towards the car: I was very happy that we were able to just this, once again, and yet mindful of how once we could do a lot more. Maybe we'll be able to do those Manhattan jaunts again, maybe not. Mayhap Charlie misses them too, and doesn't know how it came to be that he can't handle them anymore? Or is he simply relieved not to have to confront the urban jungle?

It took an hour for Charlie to stop the keening-crying. (During which time, I couldn't get myself to do anything but listen and focus on sending those "let it be" vibes.) He likes his space now, literally and figuratively and after I heard him chattering in a much more easy-going fashion, I stayed downstairs, listening but knowing I ought not to burst into Charlie's room and say "are you feeling better now?".

There's other ways to communicate that.

I hope Charlie had a good day today.
That is excellent news on progress on fading the helmet.

Have a super weekend.

I've been thinking a lot about this post. There have been phases when it seems like our world shrinks with our son's reduced tolerance for stimulus. Ironically, when he was diagnosed, we were told that by the time he was 14 (or so), he'd probably be "indistinguishable." Well, by the time he was 14, puberty had made him much more sensitive to certain stimuli, he'd become more withdrawn and sensitive to teasing from peers, and he went from being fully included, educationally, to being in a private placement. He is, however, much happier.

As he is getting older, and past the onslaught of puberty, he is adjusting to the changes of his body, and while I don't expect him ever to be "indistinguishable," nor do I think he would want to be, I do think he will, eventually, be able to handle more immersion in "regular life." Perhaps counter-intuitively, it is his being in a private placement that, I think, is making that possible. When he is not spending his whole days "fighting" an environment - physically (crowded halls and loud rooms) and socially - he has more strength to face the world the rest of the time. So I am hopeful that his, and our world will re-expand.