Home Archives Profile Subscribe
Post-incident of the red brownie box or, life must go on
Otherwise is Okay 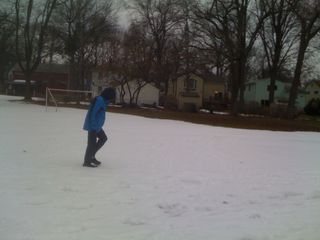 In one week, I'm going to Greece with 12 undergraduates, one colleague, and one former student who is fluent in modern (demotic) Greek. We'll be gone till March 20th.

Can I say the following enough:

Yes I am nervous, but not nervous-frantic, both at the prospect of the trip and because, as Jim himself will tell you, I'm Charlie's main caretaker, interpreter, translator, clean-up-after-er, and so forth.

I was much more nervous, and frantic, and worried, and more than half-convinced that the whole trip was a bad idea when I went last year. I wrote up a whole "how to take care of Charlie document" ("operating instructions," you know), made a picture schedule, brainstormed, brainstormed, tried to troubleshoot in advance (not really possible, of course). One thing to go on an overnight trip somewhere in the US and quite another to go on a 10-hour plane ride in a totally different time zone and with, um, an ocean and several countries inbetween.

And it all turned out fine. Jim had Spring Break and stayed around home, doing many a bike ride with Charlie. My parents came to help (am sure whatever my mom put into Charlie's lunchbox was much more interesting than what I am in the habit of giving him). I wasn't writing a personal blog then so I wrote just a little about my trip. This trip I plan to write regularly (you know me, that means daily) about traveling in Greece, something that I regretted not doing last year.

I also plan to blog and post (lots of) photos as I've been thinking of using this space so Charlie can track where I am. He doesn't yet seem to understand maps, though he does fill in "Greece" when I say "Mom's going to.....". I'm hoping to have my students take photos of me in whatever site we are; I'll post these and I've already asked Charlie's teachers to show him this blog, point to the photos on the latest entry, and use that as one more way that he'll know what's up with Mom.

I know there's Skype and such but Charlie has shown himself uninterested in communicating via the phone and such technologies. Just hearing a disembodied voice coming out of a slab of metal and plastic always draws a baffled look on his face. To some extent, I think I'll be "out of sight out of mind" somewhat to Charlie and I don't think that's a bad thing at all. While Jim of course does tons for Charlie and my mom and dad are regular visitors and a big part of Charlie's life, subtract me from the picture and (as I gather) a number of questions arise.

Rrather than writing up the "Charlie-document," I've been compiling short memos and lists, but not in crazy piles. I don't see Charlie having extra neurological storms in my absence (ha, maybe he'll have a grand total of zero---I really hope so, I mean it) and Jim obviously knows what to do. Charlie truly is older now, age-wise and also in his maturity, and while he really likes to have the saltine cracker packets opened a certain way, he can live with variations.

I've been relishing our little adventures more than usual, seeing as I won't be a player in them for a bit.

Wednesday's began at 4.30am. Charlie woke up smiley and rarin' to go, as in "go for a walk." Jim had gotten home very late (Tuesday is full day of teaching for him) so I donned boots and an old fleece jacket of Charlie's and out we went. We saw a man in an SUV delivering the newspaper to one house. There was a light rain, which bothered Charlie not at all; he sprinted and smiled his way through puddles, slush, and mud. 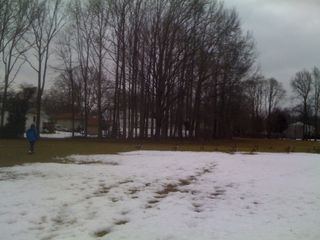 I was anticipating some video-watching while I made coffee but shortly after we came home, Charlie told me "bedtime." Back to bed it was and Charlie fell asleep until 7.45am. I had to leave to catch the train before he was awake. Jim got him up and out and Charlie had a really good day (it didn't hurt that he got to swim---he showed off his underwater swimming prowess for the first time at school and was promptly dubbed "a fish"). Charlie was too interested checking out the grocery  bags in the back of the white car to say a proper good-bye to his aide when I picked him up (we didn't push it, there's always tomorrow). He and I had a less rainy, but more mucky, afternoon walk, encountering a gaggle of Canadian geese. (Click on the photo to enlarge it to see our waddling feathered friends.) After a 5pm-ish dinner---definitely his preferred time, I've concluded---Charlie took himself up to bed and was slumbering away by 7pm.

That could mean another 4.30am wake-up on Thursday.

Early early wake-ups, over a week in Greece, mud and dead grass all over my boots, boy eager for each next school day and for my parents' soon-to-occur visit. Jim giving a talk at the East Brunswick library tonight and the U.S. House of Representatives passing the Preventing Harmful Restraint and Seclusion in Schools Act (H.R. 4247) yesterday.

Yeah, it could be a lot lot worse.

I remember last year's trip! I thought peaceful-easy thoughts for you every day. I will do the same this year, of course!

Kristina,
Go get your space in Greece - enjoy - and see how the dudes do while you're away. A week is (usually) survivable.

Thinking about the Skype, etc.- have you tried doing it in close proximity? Like talking on your cell phone to land line in the room and then scooting around the corner? Etc.

Charlie got to swim at school, and was assessed a "fish", no less. Great!

The early morning walks must give a completely different view of the world, which can be very interesting sometimes.

The thought of there being piles of memos made me laugh, I'm in the habit of writing lists on odd bits of paper which end up all over the place - and no use at all - so it's good you are avoiding this method:-) (I also like sticking post it notes everywhere but Dimitri keeps running of with the block so he can take them all apart).

Hope you have another great day!

I'm glad that you're going. You need to feed your soul, too! I like the way you said that it's okay to be slightly out of Charley's mind; it is. It's good for him to strengthen his ability to deal with change, just as it's good for all of us! Your love is still there, in the energy that remains in your home even when you are physically not there! Have a great trip!

On the few occasions when I've had to leave my kids home, leaving a list of "operating instructions" for my husband comforted me more than it did him!

So glad you get this opportunity. Really hoping you can enjoy it.

On your issue of learning to communicate with a phone, we've been working on that as well. My son won't really talk on the phone, but he is intrigued with how his voice sounds, so he will play on it. The biggest increase I've seen in using a device was when we installed an intercom between the 1st floor and the 3rd. His dinner job is to call his sisters down for dinner. Now he loves using the intercom and even plays some phrase response ritual games with them - the same thing he does face to face.

This is wonderful, Kristina. I wish a you a fulfilling and safe trip!