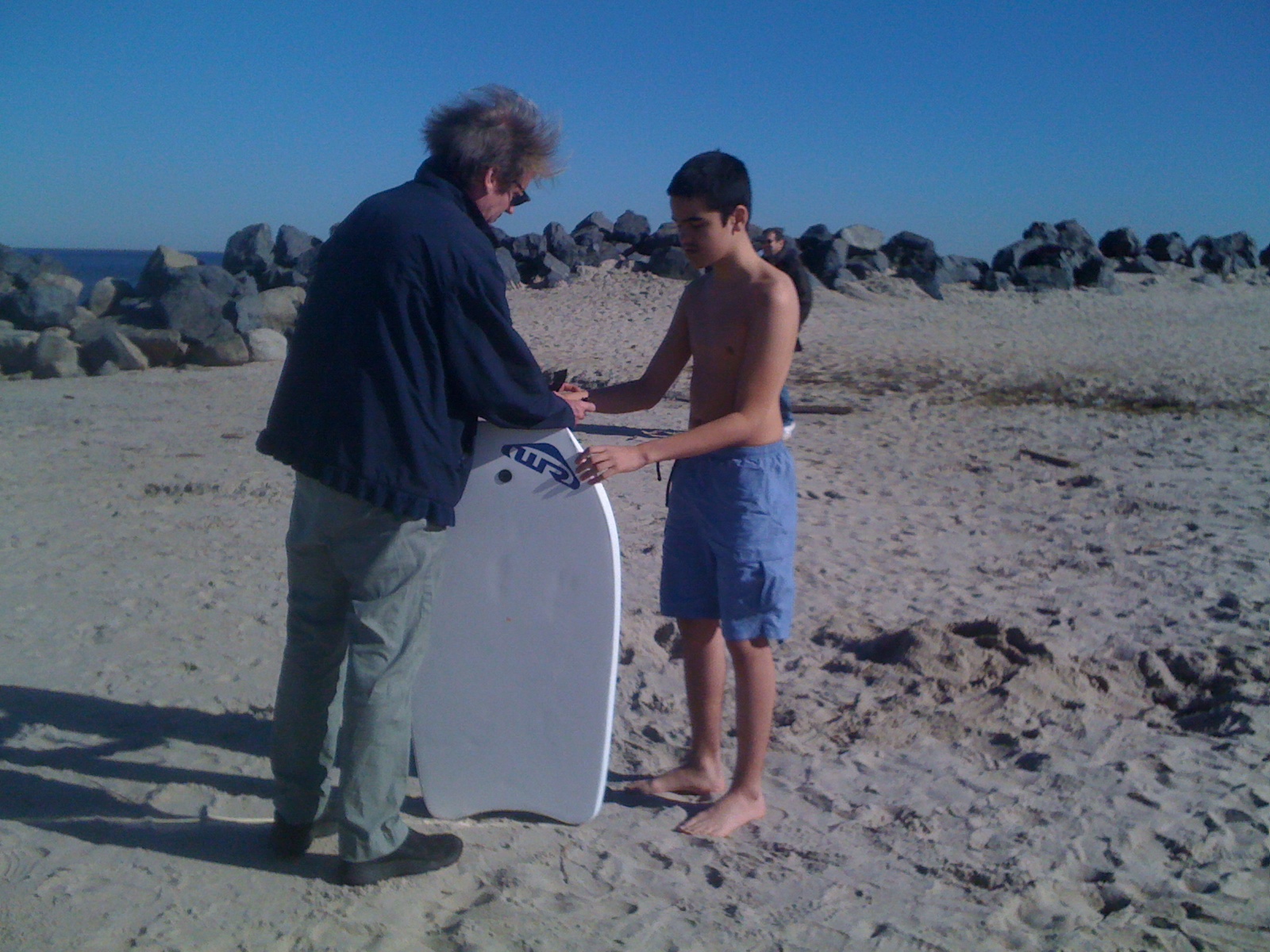 Write a post on vaccines and get lotsa comments, and perhaps especially if you take the position that vaccines and autism aren't linked; that autism (in your family's case at any rate) is most likely genetic; and that all this attention, energy, doggone fixation on the vaccine topic has been highly successful at diverting the public eye from the very urgent, very real needs of individuals on the spectrum and their families for supports and services, programs and school, jobs and job coaches, housing and transportation from the housing to the jobs.

I suspect I sound like a broken record in the above paragraph. Really, I think I've typed "need for supports and services" so many times my fingers are on auto-type when I do.

Charlie woke up cheery and smiling at 4am yesterday morning. We heard him putting on his coat and shoes and opening the door. I got up, pulled on a jacket and shoes, and went out. Warmed from jogging to keep up with Charlie, I really didn't need even the light coat I had. The sky was bluish but still tinged light orange to the east---Manhattan never sleeps, right?---and I made out the Little Dipper.

Back inside, Charlie ate the pack of sushi I'd stowed in his lunchbox, used the computer, stood by the stairs. "Yes, bedtime," he said. Before I could tell him I wasn't going to object, he said "no bedtime" and so, for the better part of an hour, he stood around and, from time to time, chatted about "no Alphabert" (a toy computer he used to have) and "no Portia" (my sister-in-law's dog whom Charlie has not seen in a long time, which is as well as he used to run when he saw the little canine), while I sat on the couch and read about women in the Hellenistic Age in ancient Greece and Egypt.

(I imagine they got up early, and that children could have well had something to do without it.)

I ran in late to my class as there had been traffic getting Charlie to school (Jim drives him Monday, Wednesday, and Thursday as he teaches on the other days), and then a bit of a bottleneck (due to Road Work and the closure of a crucial lane). Some hours later I raced from Jersey City to the suburb where Charlie's school is so I could make a fast A & P run (part of the proceeds of which Charlie helped himself to by reaching into the white car's trunk). I answered last-minute student queries about the impending Greece trip (um, we leave tomorrow) (!!) inbetween Charlie asking to use the computer to watch YouTube. Just as I was going to sit down and grab a bite to eat, he asked to go out; as we buckled our seatbelts, I handed him a piece of paper on which I'd written "just a ride/eat home/walk." Charlie took it and placed it on the backseat.

We drove a circle through and discovered a 24 hour CVS and another Home Depot (you never know when you need 'em). We saw a sign for another town's library but somehow missed seeing the actual library (I think the building must have been quite small). We drove past some body shops, gas stations for non-national chains, and a house with a banner that read "CHILE" draped across its front porch. We went into our driveway.

Charlie said "I want" and then "no stay in car" and I explained I was going to attempt to make yellow rice. I went into the house and brought out a box that indeed said "YELLOW RICE" with a picture of said dish in all its sunny glory and Charlie seemed pleased, and came inside. My parents appeared with backpacks and bags (they'll be staying with Jim and Charlie for the next week-plus). Charlie looked down when they came in and pressed his hands over his ears---he likes to warm-up slowly. He turned his nose up at the yellow rice. (Theory can be so much better than the actuality.)

14 hours later and 16 1/2 hours later, we were out on the street again, the second time with my dad keeping pace. Charlie sat on the couch and talked about a classmate and an old teacher and said some really lovely "good morning!" 's. (In anticipation of how my dad says that to him when he's waking up.) He went to bed as 10 was nearing.

Throughout the day, amid sending Jim missives of what Charlie and I were up to and getting things ready for my parents' stay, I'd been stowing things in a big black backpack: Passport. Contact lens cleaner. Bandaids. Toothbrush and toothpaste. Books (10 hour flight---only time I have to read something besides materials for my classes).  A few euros I'd saved from last year's trip. A list of students' phone numbers, health forms, xeroxes of passports, our itinerary, the two-sided fold-out map of Greece I'd bought at a rest stop last year.

It's all very exciting. And maybe all the more so because I know I'm grounded, by needing to plan ahead and think through all of Charlie's needs, and in particular those that I do as second nature. Jim of course is amply prepared but did note to me that, last year, there were lots of little, little things that came up that he'd wished he'd asked me.

Really, the three of us spend so much time together that going away feels very odd and kind of inconceivable. We've all been through so much together that I'm more than sure we'll remain a tight team o' three. Knowing I'm so grounded by my guys, I think of us as the parts of a compass in John Donne's poem, A Valediction Forbidding Mourning"":

Our two souls therefore, which are one,

Though I must go, endure not yet

A breach, but an expansion.

If they be two, they are two so

As stiff twin compasses are two:

Thy soul, the fixed foot, makes no show

To move, but doth, if the other do;

And though it in the center sit,

Yet when the other far doth roam,

It leans, and hearkens after it,

And grows erect, as that comes home.

It's three souls rather than two but Donne's image of the two arms of a compass, connected at the top and the one swinging out to draw a circle and then returning to "end where I begun": I'm the roaming arm on this excursion, and I feel more able to go forth knowing I'm grounded by my two best friends.

As for why I feel so grounded: Here's a post regarding Gravity Pulls You In.

It's sad the post on care2 didn't get more comments on after schools services.........

I have an image of NJ as being a bit barren and grubby looking?? (all body shops and gas stations!).

Nearly ready to go - exciting!! It must feel so odd, I can't imagine how much so (I've never been away from Dimitri). The weather is a bit odd by the way - on Monday everywhere was glowing yellow and it rained mud (from the Sahara apparently). Today is very grey.

Kristina,
What if you just wrote a post on the topic of supports - which is an important and valid issue - and seemed to be the main premise and certainly the one with the most promise of tangible positive achievement? I know we are missing the afterschool program that our daughter recently aged out of. Most folks' kids can haul themselves off to swim,soccer practice or the library - ours usually can't (yet), and as you pointed out, as it stands there isn't a lot out there.

Anything with the v- word is going to attract kneejerk attention but not to the matter of emphasis, and I can't help but feel that it just lets people re-air, re-practice and re-corroborate among their fellows the already overpracticed talking points and beliefs. Anyway.

My real message is that I hope that you have a safe and pleasurable trip to Greece with your class, and that before you know it you'll be back safe and sound with your guys. Bon voyage.

Have a great trip! Let go into the adventure!

I feel your pain. Not easy to leave family but I found it beneficial for everyone looking back. Such a gift to the students! Safe travels.

Have a great trip!

Of course it's possible that %25 of parents make the link when misinformation like that found in the response by Carole Tokaruk is floating around out there. *shrug*

thanks for the weather report, Emma, think I will bring my boots----we got caught in a huge downpour in Athens at the end of the trip last year (well, some of the students did, I was safely inside the hotel!).

@Emma, lots of body shops and some barren areas in the towns near us, also lots of greenery and woods (and the beach) not too far away, and some long stretches of roads lined with chain stores and all manner of commerce..... And Jersey CIty where I work is quite chaotic!

(smile). I meant it in general terms sometime, and it wasn't an order just a thought.

Hope that things are settled down enough in Greece to let you and your class get off the ground without too much delay and complication (I remember that some kind of twist came up last year when you went.). Adventures in travel...

Last year we almost didn't make it to the airport because the bus driver didn't know how to get to our terminal, almost drove back to Manhattan, and then left us on a concrete ramp..... on the way back, couldn't find the bus for over an hour, sat in Canal Street traffic for over another hour and a half, bus drive almost got into an accident and did get a ticket. --- This year, college shuttle and Jim drove me, smoother sailing.

Adventures in travel feel pretty easy thanks to, um, my daily training regimen, so to speak.