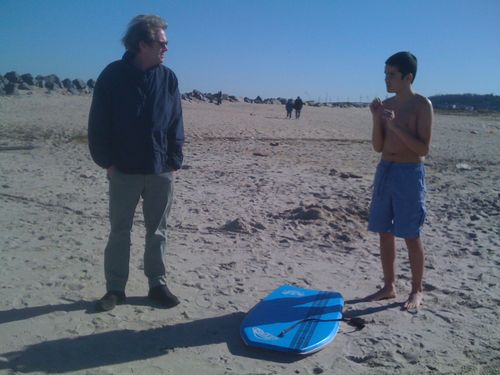 I've been noticing---actually, I've always noted this, since when Charlie was a baby, but it's been especially apparent as Charlie is growing up---that there's a sixth sense of understanding between him and Jim. Circumstances have meant that I've clocked in a great number of hours solo with Charlie and know him quite well. I am the person most likely to figure out what Charlie means when he says "give" (it means a lot more than Webster's says it does, when Charlie uses it). A slight change in Charlie's features, a straightening of his shoulders, and I know what's coming next.

With Jim and Charlie, there's something so tightly similar, in their interface with the world, especially its sensory aspects; in the lag they both have in processing difficult situations; in their both thinking better (if not best) on their feet and when in motion. And, most of all, perhaps: In their deep, below-the-skin love of the ocean.

(For which the above photo provides photographic evidence.)

It was almost 50 degrees at the beach but 35 in the ocean and, while Charlie insisted on wearing his swimsuit and doffing his shirt and jacket and socks and shoes, he didn't go in. We got the inevitable double-takes and "you know it's TOO COLD to go into the water!" from other people, including a couple of wet-suited surfers.

Sillies, Jim and I said to each other silently via glances, Charlie's not going to jump into freezing cold water. He knows better. And he also knows that, when you go to the beach, you have to be appropriately attired.

When it comes to the ocean at all times of the year, Dad, and Charlie, know best.

Somehow all is right with the world, when our children are in sync, at least for a breath of fresh air.
Thanks for this.
Glass half full.
xR

Beautiful photo...and wonderful trust in Charlie! And also a reminder that no matter what 'label' a child might have, the apple never falls far from the proverbial tree.

I love this picture.