Am writing to you from Thessaloniki in Macedonia, the second largest city in Greece. We drove into the city around 5pm and will be here tonight and tomorrow night before a very long (possibly 10 hour) drive back to Athens.

We left ancient Olympia with the sun coming in and out on Sunday afternoon and spent the night and the morning under the shadow of Mt. Parnassus in Delphi, after crossing over to the Greek mainland. Then we drove across the plain of Thessaly to Meteora, which sits at the foot of the mountains you see behind me in the photo.

As I remembered from last year, the hotel in Meteora had one computer with internet (1 euro for 30 minutes). I found the computer free, paid my euro and sent off an email to Jim. I was checking a friend's blog when suddenly about 100 windows (all with her blog) opened up all over the computer screen. One of my students was sitting nearby and he unplugged the machine and I restarted it and he tried to troubleshoot and then the hotel manager appeared just as we'd concluded the computer had a virus from too many teenagers downloading video game playing software onto the hard drive.

The hotel manager put a piece of paper with "out of order" written on it on the computer monitor. Monday evening, I read more of Vicki Forman's This Lovely Life and talked to students about all manner of things. We had dinner at the hotel: Our town guide, Emilios, has been very helpful with noting everyone's different dietary needs (one of our students eats Halal and I'm a vegetarian). A bowl of spaghetti and tomato sauce was handed to me instead of the cheese and fila pie everyone else got; some students noted that one student would really like that spaghetti, my colleague who's traveling as a chaperon told me she didn't want the cheese and fila pie, I was handed hers and happily handed over the spaghetti to a student who told me "I ate it all, Dr. Chew, thank you."

Tuesday morning, I went for a walk down around Meteora---a large-ish town---and then had breakfast with the tour guide and bus driver (who only speaks Greek; I can comprehend more words than last year and hesitantly try a few). The students were able to sleep in a bit (we've been getting on our bus at 8.30am, to take advantage of the archaeological sites being more empty in the morning) and eat breakfast at their leisure. We were on our bus shortly after 9am and drove up into the rocks---which look something Dr Seuss might have drawn---and visited two monasteries. 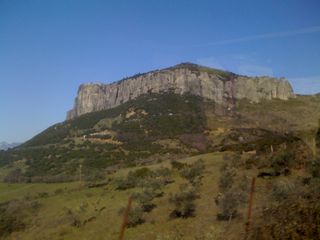 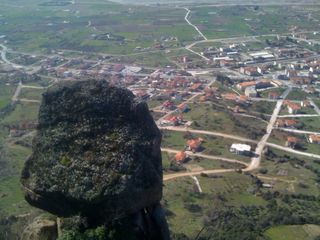 Us females had to wear skirts. (Provided by the monastery if one wasn't wearing one.) 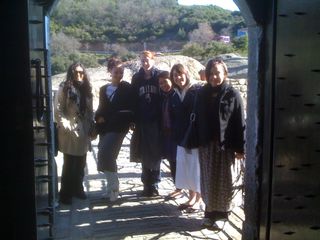 No photos are allowed inside the monasteries. But look at this. 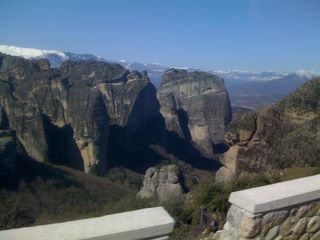 We walked down a long outdoor staircase to reach the second monastery, whose chapel dated to the 15th century or so. 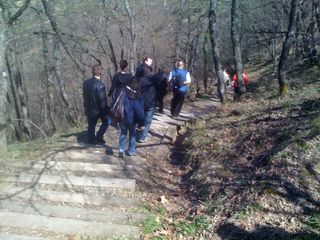 Lunch was in a restaurant with cooking"just like Mom," to quote our tour guide. 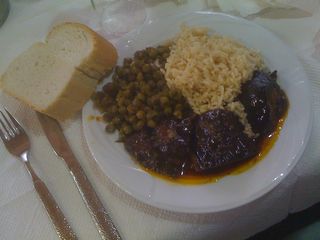 Then we drove north to Thessaloniki, with the requisite "pit stop" (this one conveniently located next to tire dealership, should one have a flat.) Once in Thessaloniki, we checked into our hotel (free wireless! so I'm not just dragging my laptop around Greece to no end) and then went for a orientation ride around the city, with a stop by the waterfront, the city's emblematic White Tower (Leukos Pyrgos), and the remains of a wall around the inner city from Roman times. Wednesday we have to be on the bus at 7.45am, as we've a number of sites (including Pella, birthplace of Alexander the Great, and Vergina, where Philip II is buried) to visit.

This has been how this week has gone: Early wake-ups, bus time, visits to sites, meals together, talking and (for me, at any rate) plenty of time to stare out the window at the Greek landscape. Needless to say, it's been quite unlike how I usually spend my days, with so much time with Charlie. In reading This Lovely Life, I've been remarking especially at Vicki's portrayal of the long, long, many, many hours she found herself clocking in with Evan, her son: So much time for his medical needs, hours and days and months at the hospital, doctors' appointments on doctors' appointments (and so many inclusive answers), more time to care for Evan, time for her preschool age daughter Josie. When Vicki writes about how close she feels to Evan after going through so much, her words rang so true with me.

It's second nature to me to think of the day in terms fo Charlie's needs (so 2pm means I should be in my car headed to his school for pick-up and 6pm means I need to get him his second dose of anti=anxiety medication). So what's weirdest of all to me, being here in Greece, is that the day passes without 2pm and 6pm requiring me to jump in the car and get the meds. It's been full-time Charlie time for Jim and my parents. He's had good days at school so far. He's wearing the helmet only for a very few hours in the morning now, and home has been good too.

Traveling around Greece has been very, very lovely and the stress-level this time has been very low (indeed, I've only realized how stressed I was last trip by the absence of worries on this trip). I'll be glad to living again on Charlie time, as---as this point in time---it's Jim's and my "default mode." It's our natural state of being.

And everyone seems to holding up fine with a little shaking up of the usual old order.

Today being a certain date, a greeting of the Irish waterfront kind from our Charlie the Gent.

I'm so glad the trip is going well, and that you can let go of one clock for another if only for a bit. Respite is good, and makes me love my "default mode."

My internal clock sets off alarms if I am not within a 10 minute drive of my house when it's nearing time for the bus to show up with Jack.

You certainly didn't choose light reading! This Lovely Life made me pause or cry or laugh or pound my fists quite often. Vicki should attach a personal-size kleenex package to every back cover!

I'm glad too the trip is going well and the stress level low. The internal clock and default mode are hard to ignore! And one of the best things about holidays is returning home, to who and what we love.

What a lovely trip. Glad that your stress is low. Continue to enjoy.

Thank you for taking us with you. Fabulous descriptions and pictures but there is no place like home and a rested mama.

Sounds lovely! Thank you for the food description and pictures! Mmmmmm.... Was wondering if you and Jim take vacations together without Charlie? (We haven't done that ... yet and don't know if)

Oh Kristina, what a lovely post. I know exactly how you feel -- the difference of how time feels and still, no matter "Adam time" or "Charlie time," or how stressed we seem to get sometimes, that we really love and miss those special "time zones." Enjoy your beautiful trip. I wish I was there!!!
Estee

Kristina, looks like so much fun! Meteora is the one place I didn't get to visit and it looks like I thought it would...Seussical! Enjoy it and I will enjoy it vicariously through you!