Ah, motherhood, what will you have me doing next.

How about single-handedly putting a slice of watermelon into a plastic bag while driving on the highway?

I speed-shop (bagels for Charlie's breakfast---they are just no good if not fresh---and watermelon) at the sprawling supermarket 5 minutes from his school, and then drive to the Big Autism Center. Charlie gets in the car and, before buckling up, reaches into the floor area of the front passenger seat where he's espied some white plastic bags.

Into the backseat a pack of three blushing watermelon slices goes.

At this point we're driving out of the BAC's big parking lot and heading for the highway. I glance back to see if Charlie's gotten the plastic open. I mean, nothing against eating fruit (watermelon ain't Doritos), but I was hoping that one piece could make it into's Charlie's lunchbox. Not to mention, watermelon isn't exactly the tidiest thing to eat, in the car and in general. I soon hear the rip of saran wrap and crunching, smacking sounds that suggest that Charlie is (as he is) munching away.

Next I find myself in the, um, sticky predicament of asking Charlie for one slice of watermelon. I avoid saying it's for his lunchbox as he's most likely going to then get out his lunchbox, which would mean seatbelt removal as he's cast his bookbag into the trunk (accessible from the back seat of our car). I hold out the bag to suggest that that is where I'd like to put one slice, please. Charlie takes the bag and sets it on the back seat. I ask for the bag. He returns it.

My "one slice" requests do result in Charlie handing me one slice of watermelon. At this point we're on the highway and I find myself having to put a medium-sized, and moderately drippy, slice of watermelon intobunched-up plastic bag. All while driving of course (in the right lane; one can only be so much of a daredevil). And of course my bag with my computer and phone and books is in the passenger seat, right in the line of bespatterment with sugary drops o' watermelon juice.

After passing one exit, I was able (with one hand) to get the watermelon slice into the slightly un-bunched bag, wrap it up, and place it atop the other plastic bag (containing bananas---not that Charlie eats them) on the floor. Charlie was himself done with the watermelon and sitting very relaxedly, any shenanigans in the front seat be d****d.

He was in such an easy mood throughout a very fast bike ride, a much more relaxed walk in the late afternoon sun, and a nasty clunk when, on a ride in the early evening, the white car's right front tire went into a pothole (Jim figured I was driving a bit too slow---too cautiously). I pulled into a nearby gas station and called Jim and AAA while a loud sssssssssssssssss in the background indicated that the air was leaking out of the tire.  Charlie sat patiently through waiting; I was already impressed with his staying peaceful-easy after the jarring and loud clonking and shaking of the car after we'd hit the pothole.

He got into the black car when Jim appeared and they went in search of Mexican fast food while I waited. AAA came in no more than 25 minutes (!!!---even before Jim came back with Charlie, eating a burrito in the back seat of the faithful, if balky, black car). Once home, Charlie helped himself to Saltines and some sweet treats my mother left in the cabinet, watched videos on the computer, and was ready for bed by 8.30pm.

I put up a post on the oppression of motherhood over at Care2.com. Mayhap I'm in denial; I have been able to manage full-time motherhood (full-time motherhood of a child with disabilities) with full-time work (albeit in a not so typical setting). Motherhood, for me, has been all about opening doors and seeing new vistas, trying new things, learning things I never would have otherwise known. 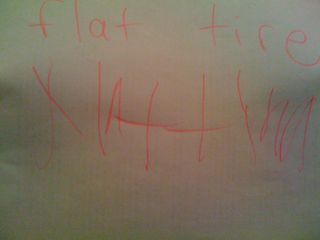 I think the "oppression" comes in with it no longer being enjoyable or doing what one determines for one's self what is manageable - even rising to what is called for - but a particular kind of "keeping up with the Joneses" or minding one's neighbor's business.

Good save on that watermelon...I hope Charlie enjoys it in his lunch. Without the event, there wouldn't be the story, so there's an upside to most things.