What If's and What Is: Traveling with Charlie

As we've been driving around Greece in our purple bubble-gum colored bus, I've been constantly thinking: What would it be like if Jim and charlie were on this trip?

A what if scenario floats into my mind: Mom professor takes students to Greece for spring break, husband and son tag along. Son gets a most wonderful educational and cultural experience seeing the Lion Gate in Mikines, the site where the ancient Olympics were held in 776 BCE, the temple where Apollo's Oracle uttered pronouncements that  changed the course of history (as when King Croesus of Lydia was told that if he marched against Persia, he would destroy a great kingdom.........he unfortunately neglected to note that his kingdom was being referred to, too).  And, son gets to hang out with cool older college kids. 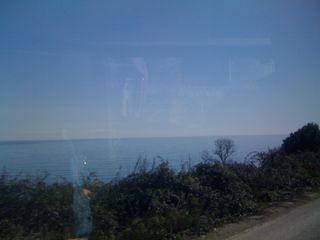 The what is secenario: Jim would love Greece, love the pace of things in a Mediterranean country, driving here and there to see all the sites and the sights, rest stops that serve spanakopita and roast chicken instead of permutations of Ore Ida fries and Cinnabon, beautiful beaches (and we only saw a strip of sand and the Aegean Sea on the side of a highway, not the beaches on the islands), and a whole lot more.

Charlie though. As you know, long airplane rides are not possible for him right now. He's a boy who, with multiple and numerous challenges, needs a daily dose of routine and order, whereas the Greece trip involves visiting different cities and towns every day, staying at different hotels almost every night, eating new foods (that are sometimes the only thing available). The potential for sensory overload is huge. There's different smells, sounds, certainly sights. The bus is, well, a bus and we're on it for quite a bit of time. Archaeological sites have dust and dirt. The thoughtful commentary of the tour guide (and our guide this time was incredibly knowledgeable) would go in one ear and out the other with my boy.

It's just not a trip for Charlie. Too, he is an adolescent boy, and the one place he associates with vacation is the beach and, in particular, the Jersey Shore. 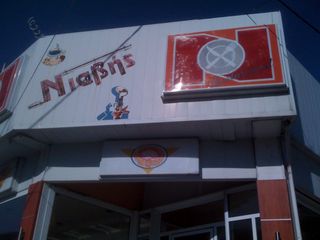 I guess this is setting up to a scenario where it's not looking too likely that Jim and Charlie might ever be able to have something of Greek holiday. Jim and I've talked about it as a maybe someday thing, though things constantly happen----those neurological storms, you know---that make even the thought of getting out to California to see my family seem harder and harder. Currently it would just not be right for us both to board an airplane and put the Atlantic ocean and most of Europe between Charlie and us.

Raising a child like Charlie means you can't do all the things you might envision. A great number of us parents whose children are beyond preschool age (maybe younger) are used to such and accept it. It's another way in which being the parent of a disabled child means that there that are limits and "not possibles."

It's another way in which being parent a disabled child can affect your other relationships, including and in particular your marriage. Currently Jim and I are able to go out and do things, but we have to do so solo (still working on the sitter situation, and a sitter for more than a few hours is not going to happen, nor would we wish to leave Charlie with anyone for such a long, long period of time).

I don't have an answer for all this. Jim and I like to talk about how maybe, when Charlie is older, he might be able to travel: Who knows? Who can chart where possibility, where a small bit of progress, might lead to? It's easy for us to be Charlie's mother and father, but to be husband and wife can get lost in the daily shuffle of trying to keep Charlie peaceful easy and ourselves more or less the same, amid work and school and car tune-ups and snow days and all. 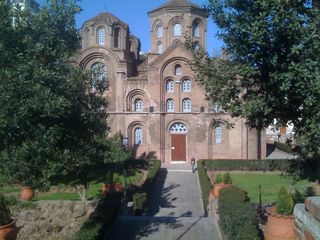 The Greece trip certainly has the effect of breaking up the usual usual for the three of us. I'm looking forward to being home tomorrow (!) and to being back to doing the daily round with my guys. But we know we can have a temporary change in the usual "tight team o' three" configuration and survive. Charlie for sure gets to see that he can manage fine without me and I realize, I can do the same. After you've spent as much time together  with your child as Jim and I have with Charlie, being without our boy and without each other can be something of a surreal experience. 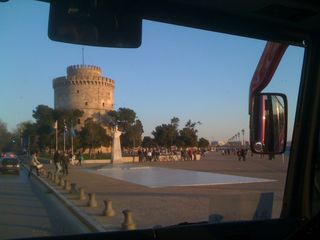 Maybe yes and maybe not. But when you're a tight team of three, what one does, does affect the others. I always know my guys are right here with me, certainly in spirit: We don't go anywhere but with each other, always.

Really who know what the future may bring? Charlie right now is hitting puberty, a difficult time generally. In a few years you may all be visiting, never say never. Or in a few years there may be something else you would all like to do together.

Also good to remember, many people never do those things they envision, it's a part of life.

What's really great is that tight team of three is there, through thick and thing enriching, supporting, just being there.

Charlie had a rough time for a half-hour at school yesterday---the kind of thing I think not only understandable, but expected. And the really good thing is that information was told to Jim without any sense of crisis.

I learned along time ago that "what ifs" are hurtful to yourself. Don't ask what if, ask why not. Why not have a goal that the three of you will be on this trip. It can happen because your overall goal is to give Charlie a wonderful quality of life and that includes accessing the world as a whole. It might take ten more years or it could be next year. You never know but its a good goal.
As an old married couple of almost 28 years, and raising two boys with autism, albiet never as affected as Charlie, let me give you a little of husband and wife advice...its truly a matter of love. The three of you love each other and how ever you and Jim work out your relationship is how it has to be at that moment and whose to say that it will not change in the future and "dates" will be possible? But it all comes down to that one little word-love. Because with love and respect for each other you do what you have to for the other person first and that is what makes a marriage work, no matter what the situation.
BTW love all the pics from greece. I love Greek history but have never been myself and I am glad your travelogue was able to take me along for the ride.

If only there were teleportation! I have always had a fantasy about a Cretan vacation (paleochora--a wonderful well-kept secret of shoreline nirvana we discovered on a pre-kids trip). I think we could sort out the visit with (costly) adaptations, but the trip there is insurmountable right now.

Someday, I hope, for your Charlie and my Henry.

I totally understand the team o'three drill! While a trip to Greece is not on the horizon, tonight there is a bday party that Sweet M would like to go to and a dinner party that has long been on the books. If we could bring on a fourth adult, M could go to bday party and we could go to dinner party and all would be well. Instead she'll go to dinner party with us and she'll watch DVDs on the computer. Not ideal, but fortunately our hosts are understanding enough to have invited little M as well. Welcome back from the land of the gods and goddesses.

@Elise, thank you for the beautiful words---I'm glad to have such a goal. And I'm afraid I will probably keep posting photos of Greece as I took so many, can't resist......

@mamacate,
Crete, someday! 'Insurmountable' is a good word---I just look forward to that 'someday,' in whatever form it may take. And if it does not come, I am sure we will find some other place to visit we like equally well.

Kristina, I love this answer. Since my son is younger, I guess we're still in the adjustment period of what we thought would be and what is. Before Jack was born, we imagined travelling everywhere with him. We are stuck right now because I'm 24/7 caregiver, therapist, teacher and Jack is so anxious about his translator - interpreter going away.

You seem to have reached a peaceful place about travel. I'm glad.