Home Archives Profile Subscribe
Red Brownie Box, Begone
A Nice Monday (what else can I say?)

With a Little Help From Our Friends 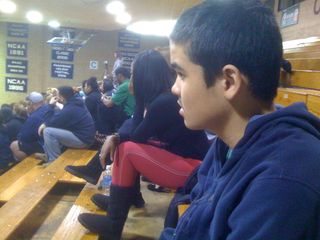 Sunday morning it was agitation city around here. We went on a ride for bagels after which (the bagels having been eaten) Charlie kept saying "I want eat, I want eat" and ardently adding "no home." We did go home---those "I want eat" requests have sometimes meant Charlie really does want to eat and sometimes are more of a generalized request for wanting something to make him feel a bit better (we've often done what most of us would do on hearing a person say "I want eat" and gotten him food, which he's sometimes eaten and sometimes not even touched). Charlie asked to go for a walk and then came running home after going a block and a half, having (maybe but most likely) sighted some dog.

There was a distinct feeling of inbetween-ness. Almost on the verge of going to back to school (and Charlie saying vehemently "no school tomorrow"---which I took as a sign of understandable nerves about returning to school after an unexpected break). Couple of hours to wait for a friend to arrive and go to a basketball game at my college. Even the weather (which, admittedly, has not been our friend of late) didn't seem to know what it wanted to do, as the sun was shining at the same time as snow fell.

Jim had been talking about trying out the bass all weekend. He plugged in the amp and I tuned it while Charlie took off both coat and jacket, shoes and socks, and started arranging boxes and shoes. Trying to remember one of the how to play electric bass videos I've shown Charlie, I pressed on the strings and strummed a scale. This led to an impromptu discussion about whole and half steps, flats, sharps and octaves with Jim. The better which to explain, I opened the very long-closed cover of our piano. Jim was asking about chords and I played a C major one, D major, pointed out half steps between E and F, and between B and C. Jim mentioned "Lucy in the Sky With Diamonds" and what else could I do but open the Beatles songbook I had placed there some time ago (it was a little dusty) and since "L" is near the middle of the alphabet, I almost (almost, gotta be honest) opened the book to.......

"Lucy in the Sky With Diamonds."

I played it, and "Say the Word," and "Octopus Garden," and "Ob-La-Di, Ob-La-Da," and "Hey, Jude," and "Michelle," and "Julia," and "Norwegian Wood," and "Eleanor Rigby," and "Nowhere Man," and, and, and, and!. Charlie walk-ran back and forth and up and down the stairs and I could heard things being moved around. I kept playing (so many to choose from, "Penny Lane," "The Long and Winding Road," "You Won't See Me," "Paperback Writer," "Lady Madonna") (our songbook just doesn't have "Baby Can I Drive Your Car," must get it). No more clomping and when I shut the book, I saw Charlie sleeping, curled up on the blue couch with his head on Jim's big beige parka. 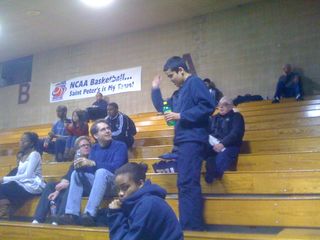 He awoke just as our friend Hal appeared. It wasn't the most peaceful-easy of days----there were several minutes when Charlie said "I want eat" ardently about 20 times in a row straight in the car in Jersey City---but he did good going into a McDonalds, waiting for his food, helping himself to soda, and exiting; sitting for about 30 minutes at a basketball game (alas, the Saint Peter's Peacocks fell to the Iona College Gaels in overtime, after we left); waiting for Vietnamese summer rolls; hanging around while Jim and Hal and I talked; going on a rather random ride with me to a nearby town while Jim and Hal caught the end of the US-Canada hockey game.

Charlie and I ended up driving under some railroad tracks, past several trucking companies (as evinced by rows of truck cabs and containers and pallets and the like arrayed here and there), and out amid a vast snowy field where a major US car manufacturer once had a factory. We saw two women holding hands while walking down a road between the snowy fields. We turned left and came to a state highway. I pointed left and said to Charlie,

"That way's Jersey City and" pointing right "that way's where I went to school."

When I was in college, I passed through this town where the factory---it's been completely leveled---once was. Then, it was a gritty stop on the way to New York City. Now, my eyes (and Charlie's) were taking in the neat rows post-war houses, some big box stores we once patronized when we first moved into our house, motels, gas stations, used car dealerships, a bowling alley and a bingo hall. We sighted a newish storefront announcing Polish specialities within and another sign for churrascaria. Charlie told me again "I want eat" and I said "ok" and we went home.

I couldn't resist playing a little more Beatles (I had yet to play "Yellow Submarine"). Charlie ran around, moving some more items (like a computer keyboard) and then I heard the water turning on for the shower.

Jim and Hal came back, we talked some more while Charlie had a snack-ish dinner (nothing like Saltines to soothe a stomach that, as I discovered, must have been bothering him all day and who knows, yesterday too) watched videos on the computer. We said good-bye as Hal left with a "yep" when I asked him (rhetorically) "work on Monday?".

School, too. Just saying the word.

My son and I were reading about Mt. Vesuvius and Pompeii last night, when we came across something that reminded me of Charlie. On one of the doorsteps of the city they found a picture of a dog with the inscription "Cave Canem."

I hope Charlie has a good day (finally) getting back to school, and I really hope that his stomach feels better (yeah, that would bring out some grouchy behavior in me too.)

(Try the bass lines in "Hey Bulldog" and "Taxman" (smile))

Warm regards you you all.

i don't even know what to say when i read some of these posts. i drift along with the imagery...you're gifted, able to place readers into a life, a reality.

you go with him and you definitely take us with you. very much a privilege, reading your posts.