A (More or Less) Cool Breeze of an April Day 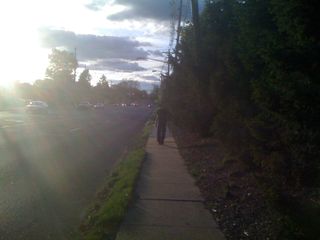 So we're making progress, and, as it usual around here, telling perfection it may cast its hoary head out the window.

I'm seriously doubtful that Charlie will return to some more agreeable (at least from a parental perspective) sleep schedule from, oh, 10pm - 7am or to regularly sleeping all the way through the night. After going to sleep around 8pm on Monday, we heard him getting out of bed at 3.51am Tuesday morning.

Fortified by recent experience, we told him (fully dressed and standing besides his shoes in the living room) that we'd be hanging in the house till 5am, at the earliest. I proceeded, in auto-mom fashion, to boil a kettle of water and wash out a rice pot in the sink. I kept the dimmer switch for the kitchen light low.

"Bedtime." I heard Charlie. He was still standing in the living room with his hands over his ears, head pointed toward downward. He stood almost completely still for a minute and then went up the (creaky) stairs.

And back to bed. I could hear him chattering for about an hour, but he was definitely back to sleep by 5am. 'Natural noise' plus the iPod timer woke him by 8am and we made it school at 5 minutes to 9.

After school, I picked up Charlie and we made a little McDonalds run at the location that is kind of our favorite (because it was renovated into a sparkling McCafe and because, for some reason, it charges less---ok, just by a few cents---than all the other locations we have patronized) (and believe you me, we have been in the drive-thru lane of many a Garden State Golden Arches). We went home, I got the mail, Charlie took off his shoes and betook himself straight to his bedroom, and was quite asleep by 5pm.

As you may know from the various posts I've written on this whole sleep topic, we've long considered naps next to anathema for Charlie. He stopped napping when he was a toddler; whenever he's napped, it's tended to mean a super-late bedtime and, consequently, a super-un-fun start to the school day due to having a rouse a super, super, super sleepy boy out of bed. But as noted, a late sleep most likely portends sleeping through the night, rather than a 1am wake-up which really does a number on the sleep, and therefore functioning, habits of all members of our small household.

Tuesday afternoon, I kept some music playing while Charlie napped. This had no effect at all as far as waking him so I set the iPod touch timer, placed it on Charlie's bed, and went to grade papers. Charlie started to wake up around 5.40pm and then was definitely awake by just after 6pm.

Charlie went sans winters, refusing my offer of a blue sweat jacket, but looking apiece with the other boys his age we passed running around with lacrosse sticks. He broke into a run several times and I concluded, he may well be thinking, when he gets too cold, just run. Fast.

Back home just as the sun was setting, we got in the car to make a trip, via a roundabout route, to the post office. Charlie issued lots of "I want" 's as we passed various groceries stores, but was nonchalant when I kept driving. I've been keeping the fridge fairly well-stocked with things he likes and we spent the rest of the evening in very peaceful style, with music and typing, and sushi. By a quarter after 9, Charlie wanted to go to bed and, after some tossing and turning, he was sleeping soon after 10pm.

If he wakes up right now as this post posts (just after midnight)---back to the drawing board?

I have never understood, how Dimitri (who has never slept easily at night) if he happens to fall asleep in the afternoon, is all but impossible to wake up? It's a mystery. And afternoon napping is something that I would also rather avoid.

If Dimitri wakes up just as I'm thinking of going to bed, I sit in the chair next to his bed and feign sleep, works now, didn't a couple of years ago....constantly adapting.

Hope you do get some sleep!

Everything should start an hour or so later, I think. Things just start way too early. Left to my own devices I like to stay up until 3am.
Which I obviously cannot do if I have a job. It means forcing myself ot go to bed at 11 and drinking chamomile/sleepytime valerian tea to get sleepy

Did Charlie make it through the night? 10:00's not horrendously late or worryingly early, either.

I've heard, and our experience is, that a cat-nap of 20 minutes or less can refresh, is easier to rouse from, and still leaves the chance of going to sleep around the "usual". Longer than that the probabilities shift to deeper sleep and disruption of the sleep schedule.

The tricky bit, as you have described, is trying to wake someone up, esp. if s/he doesn't want to. At least my daughter is usually peaceable if not completely happy. I'm a grizzly bear if I've really settled down into sleep.

Interesting about the multiple "I wants" in the car...do you think that they are "really" "I wants"? Without knowing better or context (or Charlie, for that matter), it almost reminds me of "Look" or "There's...", or possibly just the parental slot machine - which would be a real "I want", I guess.

Awake at 7am this morning, dressed and ready to hop in the car at 7.25am!

Well, there you go - that's great.

Now (smile), the real question - did YOU get some sleep, (or is that a separate behavior plan)?

Oh yes, I slept, even a bit too late so I had to rush around to get ready (Charlie beat me by quite a bit). Ran up the train platform and onto the train just in time to get bumped by the closing door----owe it to Charlie that I'm in good shape!

I like your suggestions for what Charlie means by 'I want,' especially the 'look' and 'there's'----we've tried for years to get him to add a direct object that he wants and he's always struggled with that. (When he wants something, he usually just says whatever it is; he sometimes used to add a 'yes.')

@Synesthesia, I like that staying up till 3am idea---certainly with my college students, many of those who are juniors and seniors have shifted to such a schedule, with their first class at 1pm, ideally.

@Emma, Charlie tells me to get out of his room---if I feigned sleep he'd probably take advantage of the situation and go nosing around for things.

Charlie went to lie down in his room again in the late afternoon/early evening. Have been keeping the radio---smoothish sort of jazz on. After 1/2 hour, though also keeping Regina's 20 min catnap in mind, I've been having a timer go off. I had to reset it (in smaller increments) a few times. I'm using the 'marimba' sound on the iPod touch as it doesn't seem too intrusive to Charlie's ears (I think). I really didn't think it'd be too good for him to take a 2 1/2 hour 'nap' from 5-7.30pm......

Here's hoping you will get more consecutive hours of sleep soon! I'll never again complain about my child who gets up at 5:30!
Hopped over from Barbara's blog carnival...

yeah, i set my classes late in college after the burning inferno of waking up for 8:30 classes

STILL didn't stop me from falling asleep in class though ><

I have kind of noticed that with students, regardless of how much they're into the topic! College life.....