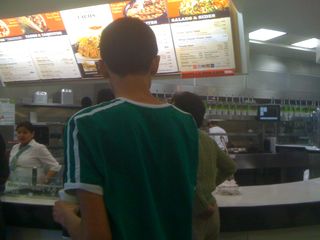 Charlie and I neared the local state road that we cross to get home and he said,

"[Name of chain Mexican fast food restaurant where he's been getting his burritos]!"

In days of yore, I would have instantly thought, "we have to go there now, it's so great Charlie asked!" This would have been my response when Charlie was much younger---5 or so---and just starting (emphasize starting) to speak clearly enough, so that we could mostly recognize what he was saying.

When he was around 7, our jumping to respond to Charlie talking started to get a little more harried, as we noted him getting agitated when his words were not near-immediately matched to the thing asked for. I guess you could say, we started to be as conditioned to responding in a certain way---as fast as possible---to Charlie's words as he was to speak them.

Talking and, indeed, communicating have always been challenging for Charlie. It took so much effort---huge efforts on Charlie's part, most of all---to learn to talk that, years ago, it never really occurred to me that there might be a day when Charlie's speech could, besides helping him, create new problems.

But that's the stage we appear to be at right now. Of course it's a daily wonder that Charlie can and does talk, and that he's so motivated to get his point across, to use words and phrases to make meaning. But the obsessive-compulsive tendencies we observe in Charlie's behavior also show up in how he uses language. Words and phrases for things he likes (sushi, burritos; the ocean; music) are used a lot: Who doesn't, after all, like to talk a lot about favorite things? But a growing difficulty for Charlie is how he uses, and perhaps over-uses, those favorite words, perhaps---

(I like to use a lot of perhaps's in writing about Charlie's language and speech as much of what I infer about it is just, that, inferences based on observations and reflections from my own study of a lot of languages, some linguistics, and a great deal of literature)

---perhaps to comfort himself? because those are tried and true words he knows have, at some point, brought him something he likes a lot and that has brought at least immediate comfort and pleasure? And, perhaps, because Charlie doesn't have a ton of phrases to talk himself out of feeling bad, he over-overuses those key phrases. And we, eager to comfort an upset boy, have regularly rushed to reinforce what Charlie says, and then---of late---wondered why he sometimes got five times more upset when we did (lots of banging, wailing, crying, general unhappiness).

Having thought about all this for the past couple of months, and it being 3.40pm and Charlie having just had a snack, this was my answer to his request yesterday afternoon, after a pause as we crossed the state highway:

"We have to put away to your bookbag and Mom needs to do something."

I avoided saying "home" as that's a word with very specific meanings to Charlie, namely "we're not going to do what you want and we're most certainly not going to go where you want."

A glance in the rear view mirror showed a smiling Charlie, and I carefully drove over one pot-hole laden road (we got a flat tire on it a few weeks ago). Once home, he rummaged in the fridge, asked before eating some things, and (as yesterday), betook himself to his room for an extended rest. (Again giving me time to Get Some Work Work Done.)

He got up after awhile, put on his shoes, and looked at me.

So into the car we went, and to the place Charlie had mentioned a number of hours before.

It's just my suspicion, but---based on Charlie's grin as he stood in line for his burrito to be made, the speed with which he devoured it in the car, and his general peaceful-easy-feelingness until he went to bed at a late-ish, but not outrageously late, time---that a little waiting made for a much more satisfying (not to mention delicious-er) meal.

And another fine day.

Is it okay to advance a theory?

I think Charlie is trying to have a conversation with his limited vocabulary. "I want" seems a pretty standard conversation starter with him; perhaps he uses it because it makes you pay attention, not because he necessarily *wants* the thing. You are Jim are both highly verbal people. He knows how much speech is venerated in your family. He wants to participate - that's obvious.

What sort of work does his school do with developing with language capacity? Do they teach him vocabulary words, aside from nouns? I suspect that as his ability to communicate with words improves, these peaceful-easy days will continue.

Does Charlie seem to have any interests aside from walking, biking, music and YouTube? Does he like to hear stories of any kind?

Charlie ceased to be interested in having books and stories read to him some time ago. (Some years ago, I guess that might be a more accurate way to put it.) I've tried to read to him from time to time; he gets right up.

At school, a lot of his speech therapy and some classtime lessons is about working on conversation skills, as far as being able to go a few turns in a conversation---he's certainly learned 'how are you/I'm fine' and "thank you/you're welcome' sort of exchanges. These are somewhat rote, but there's a fair amount of Charlie's language that has such a quality.

At school, lots of work on using verbs and generally lengthening his utterances with adjectives, prepositions phrases, question words. But Charlie on his own prefers, I guess you could say, to economize with his words.

"'how are you/I'm fine' and "thank you/you're welcome' sort of exchanges. These are somewhat rote, but there's a fair amount of Charlie's language that has such a quality. "

I might venture that those are kind of rote for lots of people - I recall somewhat ruefully when I was young and green someone nudging me and saying, "Psst. He doesn't REALLY want to know how you are". "I'm fine" works, and is kind of nice ice breaker - such as at the dentist office, where the receptionist always asks my daughter, "How are you?" "Okay, how are you?" It seems to make that lady's day. Most of the little niceties are similar to "gesundheit" - something to say, but not really anything anyone gives much thought to.

Just out of curiosity, how many of those additional words do you work into general conversation? My daughter tends to be economical too, but I nudge her (and support her) to use the sentence stems, etc., as well as time-delay and "pretend dumbness" both for practice and for generalization, because her tendency is towards discrimination. It hasn't happened overnight and isn't typically fluent, but it's increasing and I see increased indications of affect that the usefulness and meaning are coming through.