In Motion: Charlie's Way of Being 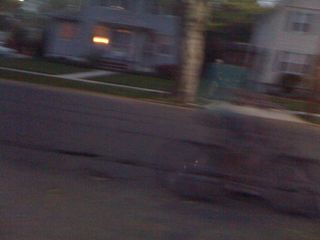 If you asked me right now what Charlie's favorite thing to do is, I would have to say:

Preferably out of doors, under the wide open sky (and the stars), with space all around him.

On second thought, make that of necessity out of doors in the good old-fashioned fresh air. Charlie used sometimes to pedal on an exercise bike at his former school. He sometimes liked it a lot and other times he, well, didn't. We have tried him a few times on a treadmill and Charlie's wanted to get off fairly quickly. I'm wondering if he just doesn't see the point of doing repetitive movements on a noisy machine, of pedaling and pedaling and not--so unlike on his bike---getting anywhere?

I have to admit, I am with him on this. I've been running since being on my (very small) high school's (quite small) cross country team. I've been always run outdoors (and in some inclement weather), except for a couple of months when I became a regular at our local fitness center, on the treadmill. I'd rather have scenery to look at, instead of TV monitors and the numbers for 'distance covered' and 'calories burned,' not to mention all the clanking and dials and buttons.

Though thanks to Charlie lately, I haven't been bothering with morning jogs. Thursday was another 6-walk (one a long walk), bike ride day, plus Charlie again woke up way too early. There's an intense amount of energy (as you may gather) in our boy and he seems to have figured out what to do with it:

It does make me think that it's going to be a long, long while before Charlie can sit on a cross-country airplane ride. In the meantime, we'll be walking.

My son has always functioned better with lots and lots of full-body motion. We used to hold his early intervention speech therapy sessions in his toddler swing outside, as that was enough motion to keep him happy AND produce sound. And now, we do homework the second we get home from school since playing outside is his preferred reward. Pollen be darned; we will be outside and in motion every second possible :)

Sounds good to me. Sure there are many caveats for safety, but the walking and biking your family does provides a whole cascade of benefits.

I think the pollen has been affecting us (as i all of us) this week--- But outside remains the place to be!

As a life-long bike rider I'm with Charlie. Biking to nowhere on a stationary bike - forget it! Being in motion is what it is all about. Bikes were meant for transportation and outdoor fun.

I totally agree, Patricia! I would like to join Jim and Charlie, but not ride solo with Charlie---not as fit on a bike as Jim!