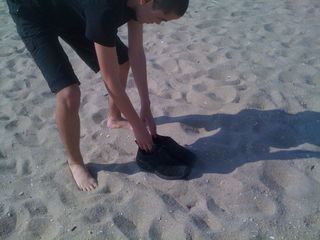 We had gone to the beach (I did tell you this is the year of the beach as a habit). Charlie asked to take off his socks and shoes (Jim had gone barefoot too; the sand was nice and warm) and then his shirt. Charlie shoved his toes deep into the sand over and walked, almost skipping, towards the water. A wave washed over all three of us's feet: Pretty cold. But it did feel good.

Charlie asked to put his shirt back on and we walked for a ways before he asked "I want." Lately he's been doing this quite a bit, saying "I want" or "yes" but not saying what exactly it is he wants. Asking him "what do you want" too many times can lead to Charlie being frustrated; I'm guessing (1) he really is bothered by too many "wh" questions and (2) he often can't retrieve the word he needs as quickly as possible. It would be good to have photos or pictures that he could point to, though often it seems like the images we provide Charlie with aren't exactly what he's trying to express---working on getting some onto his iPod Touch.

Shoes and socks re-put-on, Charlie went to the white car, with Jim and me following. We drove a short distant and heard thumping and sounds of distress from the backseat. And then,

Jim hastily pulled over and, with a boy at top-level agitation, we searched the backseat and trunk from top to bottom; I climbed into the trunk to peer into every nook and cranny. No beads.

There was no getting back in the car at that point. Jim directed Charlie south. It was an unfamiliar street across from a sea wall and beside some very fine beach houses.

We walked and walked, Charlie sobbing all the way, hands plastered over his ears. Jim and I formulated plans: We'd drive back to the parking lot at the beach and look (images of smashed green worry bead fragments on a black cord dancing in my head).--- Maybe Charlie had left the beads at home? but that seemed impossible, as Charlie would have asked for them awhile back if he had. ---- If the beads did not turn up at home, I'd either search the web or get in touch with friends in Greece to find some of that shade of green.

It'd been an accident that Charlie had gotten ahold of the green worry beads. I'd bought them as a gift for a secretary at work on last year's trip; soon as Charlie saw me unwrap them, they became his. The little strand of beads has seemed to provide him with unstinting comfort. He doesn't take the beads into school, leaving them in the back seat of the car. At home, he makes sure he knows where the beads are at all times, usually a spot on the floor or on his bed. While in Greece in March, I'd looked all over for beads of the exact same sort and hue. I found more green ones but always made of some cheap plastic and I suspect Charlie favors these beads not only for their color, but also their silky, cool feel. I had bought him an amber strand---not plastic, as the storekeeper assured me as he took them out of a glass case---to give Charlie on his birthday.

Or in an emergency.

Jim had the thought that we could walk some towns down to a hamburger stand. The sea air had just a touch of a breeze and the sun was warm, but not blazing. After some more walking, it became clear that a walk to the hamburger stand would be a truly mega-walk and we told Charlie to turn around and head back to the car. He was still crying and there was one instance of him throwing him on the ground. Once back in the car, he wept, a full-throated, desperate, sound, of mourning and deep, deep distress, with gulping sobs.

Jim and I sat quietly. Jim got us to the hamburger stand; we planned to drive back to the beach to check the parking lot after getting something to eat. Charlie and I were waiting in the car as Jim went in. Then I thought I'd get out and check the floor of the car, once again. I opened the door on the driver side and looked in the narrow little crawl space on the floor under the chair.

These were immediately displayed to Charlie, who immediately reached for them, mouth in a bit of an O. In the meantime, I called out "I found the beads!" to Jim, and asked for an order of onion rings. Gotta celebrate the small stuff.

(Though actually, I'd say it was a very big find.)

On the way back up the Parkway, we heard Charlie say "hug, hug," from the backseat. Adolescent boy syndrome has set in and Charlie is most definitely not interesting in full-arm hugs (he often welcomed these when he was younger). But a little contact is still good and I leaned my hand towards the backseat.

Charlie tapped my fingers once with his.

"Hey pal, how about a hug for Dad," Jim said and held his hand back too, and got a similar tap from Charlie.

Yes, tap-hugs are A Good Thing, better even than fresh onion rings.

Phew! Glad you found the worry beads. So great that Charlie asked for a hug after beads were recovered!!

Lost things that are desperately needed happen here too often. Questions about where did you last have them are too much in the best of times and the search/worry times make any wh question lead to screams. The iPod used to go missing - now he uses it only on our bed plugged into the charger. One of the reasons I wanted to get an iPad was that it should be easier to find :-)

Thank goodness they were found - did you try web and eBay searches for a backup or two?

The hug was sweet.
Ah,"back-up" -(for a period we had to have duplicates of particular items and then gave the loved items "just so homes" to consistently go back to so that they could be reliably found and that's really cut back on the disappointment and anxiety factor (for everyone)). In the car that's a caddy and even though it took lots of practice to get there, my daughter uses it for her small items.
There's just some things that are not going to be "as good" so I can relate to why you sought particular beads in Greece and not the less satisfying product (I recall someone once asking me, "but why does it have to be THAT particular one?") I can relate.

I bet those onion rings were good - for multiple reasons. Take care.

Finding those lost items brings a relief that is unbelievable! I'm very happy for you and Charlie that the beads were found. How many hours have we all spent, scouring the internet for replacement (or backup) of such items? It's great when our kids can appreciate our efforts on their behalf. Good for Charlie!

I love your blog(only found it a couple of weeks ago)! Charlie sounds like a wonderful boy - and I love the tap hugs - how cute is that?! I live in Greece.... so I will keep my eyes open for any *nice* (not plastic!!) green worry beads, it would be my pleasure to find some and send them to you for back up!

If I find some, I will get back to you - to ask for your address so I can send them to you!
Take care, Isabel x

Does Charlie use "hug" for other forms of physical affection, or only in specific instances?

@Louise,
Charlie's asked for a 'hug' that way before---often after he's upset. I don't think a full-out hug would be what he wants at the moment, but he definitely seems to want some human contact, for sure.

@Isabel,
thanks so much---let me know if you find any beads, that would be too nice of you!---thank you so much for reading!

@Judy T,
I really thought the beads were gone as we have lost one strand. But then it occurred to me, better check......

@Regina,
Charlie usually keeps everything carefully arranged on the backseat. Not sure how the beads got displaced. I've tried to give him a pouch or some such to hold them in but then he gets all obsessive about the pouch and then we have to keep track of that........ My students thought I'd just buy a suitcase of worry beads and I thought I might, then realized that if they weren't the _right_ones, no point to it!

@a parent,
I have checked the web and eBay but I've felt a little wary of mail ordering some beads, or maybe I just want an excuse to go back to Greece to look.......

@Emma,
Jim and I were definitely celebrating after we found those beads!

So it's turtles all the way down. I can see that.

Very glad you found his favorite - definitely one of those "whew" moments. Warm regards.

Have you ever looked through the bead section of a craft store? If you could find the right beads I would thing the stringing would be pretty easy. Just a thought.

My child absolutely loves beads, what I don't understand is what is so great about them??? Anywho, we just got a couple from the dollar store by us, and it never amazes me how a dollar item can be worth so much! Ever check there?

Glad you found those beads, we've had many of those Armageddon moments where things were lost, and it's always a great triumph when its found, and definitely a time to celebrate :)!

That's the second time in 2 months I've heard of The Most Necessary Item In The World That Was Right There In The Car, Really It Was being found in that spot in the car on the second or third search.

I'm very glad they were found!