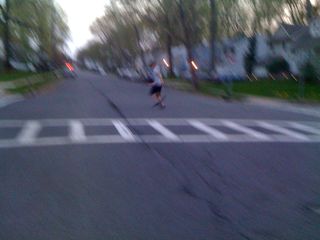 Speak of the devil.

No sooner (as in Wednesday) do I write about Charlie being stuck on wearing his blue fleece jacket and fleece gloves even on a 92 degree day, then---as in the very next day, Thursday---he goes sans winters.

That phrase, sans winters, being another Jim-ism (like Autismland), with a nod to the French, as in the sans culottes.

Jim had picked up Charlie at school and then---while I made a trip to the mall to drop off my laptop (grey lines all across the monitor; not good)---took him on a bike ride on the "new urban route" around our town; got him a buzzcut in the local barber shop where Charlie's been going for five or so years; did a walk.  All sans winters. 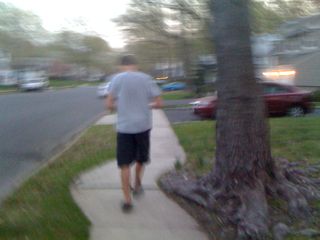 Jim later revealed his genius technique to me. He had told Charlie:

"Let's leave them here. We'll just go like this, it'll be fun with the breeze."

Charlie (Jim said) had patted the blue fleece gloves, which were carefully placed atop a picture of animals printed on a little black backpack I had gotten for him from the New Acropolis Museum in Athens. (The backpack isn't big enough to fit Charlie's two lunchboxes or rather, his snackbox and his lunchbox, so it's so far yet to be used as a backpack.) Jim again suggested, in the same peaceful-easy tone, that Charlie "leave them here" and, after another firm pat, out the door Charlie went,  light and easy in his short-sleeve shirt, both on his bike and on a walk. On three more walks---all with that breeze indeed picking up---Charlie ran out yes, sans winters; free and fleeceless. 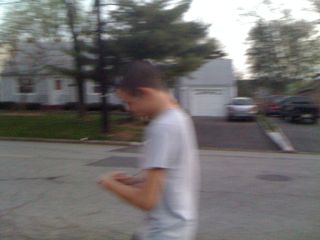 It is supposed to cool off here in New Jersey today and over the weekend, with some rain, so we may find ourselves having to encourage Charlie to wear his jacket---guess you just can't win.

Though I do think he can probably skip the gloves.

(I know all these photos are blurry---Charlie, de-fleeced, was moving too fast.)

I think many families create their own -isms - even families that do no have members with diagnoses.

My mind is swirling with thoughts about all the mental processing evidenced by leaving a jacket when it is not necessary. Truly a notable event.

Nice work; kudos to Jim! And the blurry photos? Lookan awful lot like the ones I take of my own son lately. Perpetual motion machines, our boys!

After a few weeks of almost 20 degree weather (Celsius), we had snow today. Everyone here is in a bit of a quandary, as according to my kids, spring starts on March 21, which means coats and mitts go away for another year. I'll be glad when the weather's a bit more predictable :-)