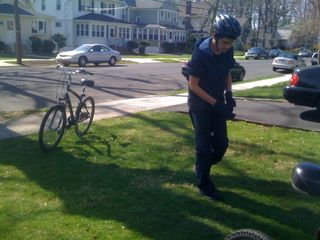 Walk #1. 7.30am. Charlie woke just before 7am and (as he usually does) got up, got himself dressed, ran clomping down the stairs with his stuff and opened the front door. Jim and I roused ourselves up post-haste and it was worth it as, instead of getting into the car and demanding that we drive off, Charlie asked for a walk.

Walk #2. 8.46am. This one occurred under conditions of duress. After Walk #1 we all got in the white car to get bagels. Within 5 minutes of leaving our driveway, Charlie cried out, grabbed for my arm, flung all of himself over all of the back of the car. Jim got us home and (again post-haste) we told Charlie "walk," and then ran after him running down the street.

(Charlie was running because he was in deep distress, but he's also started to do the first half of all our walks at an all-out sprint.)

Charlie was still crying when we got back in the car post-walk. We got bagels, but he didn'ttouch his. Jim and I definitely suspected stomach trouble and I prompted Charlie to say "stomach ache" and "my stomach hurts."

Bike Ride Interlude. 9.30am. Once back from a ride that Charlie asked for, Jim noted how fast he has to pedal to keep up with our boy. Back in the fall bike rides often stretched on and on as Charlie kept getting off the bike and then back on. Now, aside from waiting for cars at intersections, Charlie's been riding steadily and, yes, at top speed.

Walk #3. 3pm. It was 75 degrees yesterday. Charlie has still been wearing his blue fleece jacket, and I considered him only wearing this one jacket progress, as he has still been wearing all of his winter gear on our walks. Prior to this walk---which Charlie asked for following a repeat of the "sentimental journey" he and I did on Tuesday, but in the opposite direction---he had reached for his blue parka and gloves and I had said something to the effect of "are you sure you need those." It generally takes Charlie a couple of days/weeks to transition from one season's clothing into the next and, as it's just gotten warm as of yesterday, I was expecting him to insist on the parka and gloves. (We'll see about tomorrow.)

Walk #4. 6pm. A post-dinner stroll, I guess you could call this. Charlie and I----Jim had left around noon to give a lecture at a community college in Poughkeepsie---encountered a couple of walkers and runners on this walk (whom Charlie could have outrun easily). We also sighted Nemesis Dog in her or his front yard; Charlie was careful to walk a wide arc in the opposite direction. But, he simple moved out of the way (ok, onto someone's lawn) when we met a family with a brown and black dog on a leash.

Again, Charlie, asked to go on this walk.

And yes, Charlie also asked for Walk #5. 8.30pm. I would say this was the most pleasant, relaxed walk, in part because it was dark and the absence of direct, bright light seems to help Charlie be much more at ease; in part because Jim and I were right to suggest that Charlie say "my stomach hurts" and that he had a "stomach ache." He indeed must have not been feeling too good earlier this morning, hence his storminess in the car.

Once home, I showed Charlie some of Jim's interview on Channel 13-WNET; Charlie smiled what I like to call his "secret smile," as it hints that he's especially pleased about something and he ain't gonna tell you exactly.

I'm all right with just seeing that smile and yes, I am definitely going to keep working on teaching those stomach phrases. Most of what Charlie says on his own are (1) requests and (2) things and people from his past. Using words to describe something like an "internal state," how he feels, would be a new thing and something that---like learning to ask for walks when he feels his energy level rising---is one more way to help Charlie handle, and soothe, his distress on his own.

I would be plum wore out after a day of such demanding physical activity. Is there any way at all to channel some of Charlie's tremendous phsyical energy into such other format? Yes, Charlie has learned to handle his distress by walking, which is a huge (literal) step. But it still is not anything that he can handle by himself.

Did you see this news report about the 10 year old tasered by police at a day-care center in Indiana, because he was engaged in an uncontrollable tantrum?

The police won't release details on the child, because of privacy issues. But they have had to deal with him before for the same things, apparently. This sounds a lot like the child had a "neurological storm," and the daycare and the police have no idea how to handle it.

Is there any activity on creating an "autism interaction" program to educate police and perhaps other emergency workers? To think of kids getting tasered because adults have no idea how to deal with them is horrifying.

"Is there any activity on creating an "autism interaction" program to educate police and perhaps other emergency workers? To think of kids getting tasered because adults have no idea how to deal with them is horrifying."

This is Dennis Debbaudt's program; he's done a lot of work in this area.
http://www.autismriskmanagement.com/
It also depends on whether a jurisdiction gets this or similar training, either mandated by law or voluntarily (and then practices - there was a recent case where an autistic person was shot, even though the department had had the training; it was not entirely clear from stories whether the officers involved had been among those trained)

I am concerned that if direct service/care providers/educational staff are not supplied training in deescalation procedures that bringing in law enforcement is going to be something that will occur as a fallback, and then if they do not have training...

Kristina,
Does Charlie have "ouch" or "sick" in his vocabulary and point to body parts? I guess I'm thinking about the generalized case of indicating that something's not quite right no matter where/how it might be.
I'm just asking (and really just thinking aloud)...and I may be way off base here, but as a migraine sufferer, I have definite GI manifestations, but where it really "hurts" is my head; however (eventually), relief of the GI problem helps the headache. BTW, I'm not saying he has migraines but just providing an example.

In any event, being able to indicate illness is IM book a survival skill; I've been very saddened by stories of persons who were in pain but unable to express it, having the resulting behavior interpreted as "problem behavior" or having it dealt with (severely and inappropriately) as "problem behavior" and even dying as a result of that they were unable to state.

@Regina, He doesn't have "ouch" or "sick" in his vocab---am going to suggest these to his teacher and speech therapist, and I much like the notion of them being generalized ways to indicate something's not feeling right.

Louise, Jim and I do thrive on the walks, but that's us---we all seem to need some physical activity to get the thinking going.... but it certainly helps to have the sun shining. I'll say a bit more about the police around here but Charlie wants the laptop at this moment......

As for the walks, I really can't think of anything besides walking (running), biking, swimming (when it's warmer) for Charlie and his energy. He really likes to be outside. He could frankly manage most of the walk himself but we could hardly let him go out on his own, of course.

There have been a couple of reports about police using tasers on autistic adults.

It seems that that Indiana daycare and the police may not have known at all how to address the needs of that child, it goes without saying. Another reason we've grown wary of leaving Charlie in many settings.

The police and other first responders around here have had training. It's random others one has concern about---can't-train everyone. And I've felt that ER and hospital staff might have more training about autism as our experiences with them regarding Charlie have left much to be desired, sadly.