Home Archives Profile Subscribe
Shadows and Sun and Gray and Sky
Monday, Very Much On the Move 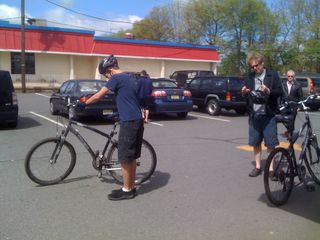 To those of you who've noted that reading some of my posts---in particular, the ones for which it's been an understatement to use the term 'action-packed'---has been enough to induce something like fatigue, you'll be pleased to know that yesterday, Sunday, was something like a 'day of rest' for us, spent at home.

Being us and Charlie having a quite high level of energy, we still did two neighborhood walks (a short and a long one) and a morning bike ride at speeds that led Jim to note that Charlie's not riding his bike like some kid on a lazy lark, but as if he were in more of a Lance Armstrong-training-sort of-mode. And then, in the later afternoon, there was a short walk (but with a strong breeze off the water blowing down on us) at a park in Bayonne across from Port Newark.

Charlie had gone to bed at 11pm on Saturday night. He'd gone to bed at that time on Friday night too and woke at 6.40am after which we'd had a super-active Saturday. Sunday he'd slept till about a quarter to 10am---yes, definitely 'sleeping in.'

He had gotten upset in the car just as we were leaving the beach on Saturday. On a late walk after we'd returned home, Jim and I had conferred about how here we were doing so many things, so many activities, to keep Charlie going and peaceful, and still a difficult moment.

We both thought back to how, several weeks back, a ride to get a take-out burrito that he'd been insistently requesting had ended with us back home with no burrito and one extremely upset boy (and two equally upset parents, to be quite honest). This was what had first spurred me to really think about the agony of anticipation as a precursor to some of Charlie's worst neurological storms. Charlie had dissolved into said storm before ever getting the burrito and Jim and I had started to ask ourselves if there wasn't something (something very puzzling, but nonetheless something) going on in which Charlie was almost challenging us, daring us, testing us? to make good on his obsessive requests, but that somehow whatever he was requesting (like that burrito) wasn't really what he wanted; that his requests were ardent efforts to express something (a stomach-ache; a sense that he just felt cruddy and that nothing was right with the world the way I remember things feeling when I was 13 years old)---somethings that are very hard for anyone to express and most likely near-impossible for a child with minimal language.

So Jim and I concluded, it was high-time to change up the weekend routine, and to do what we thought we needed to do while of course acknowledging Charlie's requests. Jim got out the bikes Sunday morning and told Charlie they'd do a ride they hadn't done in quite a while, through the streets where Jim first took Charlie on some of his longer bike rides and towards a local bagel store. Charlie said "no" several times over and then asked for his bike helmet and off they went.

In support vehicle mode, I drove the white car over and pulled into the parking lot just as Jim was texting me where they were. Charlie and I waited at an outdoor table, me watching a school board candidate try to pass out flyers to customers (he didn't ask us, but I would have told him, we live in the next town over, and of course I would have asked about special ed funding). Jim brought out still-warm bagels. Charlie ate half of his 'mishmash' (= an everything bagel) and wanted to get back on his bike.

At home, he immediately wanted to get in the car. Rather than insist he stay in the house, Jim and I said ok. I wrote out a little schedule and set the iPod touch timer and Charlie shut the door, very loudly. He was very peaceful sitting in there, looking at the changing numbers of the timer and Jim speculated that the car is like Temple Grandin's squeeze machine for Charlie, a safe and confined space of his own.

The day passed with us doing something that we hadn't done in a long time: Just hang around home. Jim caught up on lots of emails and I put together a presentation for a noontime event at work on Monday and read about women in the early Roman empire. Charlie came inside to eat and then he and I took the long walk, and then he wanted back in the car. At one point he asked for the computer and listened to some music. I had backed the car into our driveway---which is so close to our house that, with the front door open, we could hear Charlie very clearly--and I wonder if being able to sit and see out into the street was also a good thing.

Towards the late afternoon Jim and I thought of visiting a restaurant in Bayonne, where we'd once gone regularly with Charlie until the noise and close quarters became too much. As we drove onto the Turnpike, I thought about how this was the first time the three of us had been in the car together all day. The sky was magnificent with the clouds hanging low and sunlight streaming through. Charlie said "no" to getting out to see the park and to going to the restaurant, but he got right out of the car for a short jaunt. And, after Jim put a box with a pan of paella in the back of the white car, Charlie turned right around, asked for a spoon, and helped himself to yellow rice and scallops. (He left Jim the lobster.)

We were home before 7pm. Charlie took himself right to bed and was soon sound asleep.

Charlie seems to be having---as I think you've noticed---a lot of trouble regulating his energy levels. Also, he seems to have some compulsion to keep pushing himself to do things, do one more walk, go out yet again, and then he's tired beyond thinking and (you guessed it), storminess ensues. We've been mulling all these things over, especially in view of the fact that, in less than a month, Charlie will be 13 years old, officially an adolescent. Think we'd all better rest up while we can, no kidding.

And it occurs to me, Charlie must be having yet another growth spurt. He must be around 5' 8" now.

As Dimitri gets older, the more often I find myself racking my brains to think of things he can do at home, either by himself or with me (or his dad). He is not as compulsive about playing with marble runs and other such things any more, and (it seems) often becomes bored and frustrated with the games that he used to like so much.

I think we often go out, just for something to do...although that is still good too, there are lots of benefits to going out. And when we do just stay in I often get itchy feet just to get out and get going myself :). Ah - finding that balance is so difficult.

I'm glad that you had a quiet day :-) We're having some problems with varying energy levels as well...everyone seems to be having difficulty sleeping or staying awake at various times, mixed in with bursts of frenetic activity. I've been chalking it up to a mixture of puberty and unsettled weather...we had snow on Saturday, and it's supposed to be 70 degrees again tomorrow.

It's definitely a challenge to find a good mixture of indoor/outdoor things at the moment, for all of us.

"Jim and I had conferred about how here we were doing so many things, so many activities, to keep Charlie going and peaceful, and still a difficult moment."

What do you think would happen if Charlie were left to his own devices for a day, instead of you guys doing so much to keep him peaceful? Do you think he would sit in the car or in his room for the day, more of the same as yesterday? Or do you anticipate some other response?

Thank you for the thought of the car being like the squeeze machine. I think that may resonate for my daughter's situation too.

So glad that you got a day of rest!

I am glad that you both had a slow down day. Just like both of you, I have had a long stretch of working out days for the last 4-5 months. My sons and I are playing basketball almost everyday after school. They are not able (yet) to play in a team so we play together. In my humbled opinions, it is not only good for Charlie but also good for both of you to be physically active. I have a few friends here told me that I have spent too much time playing basketballs with my sons. They told me that I am too old for that. Last week, a friend of mine had a heart attack. His doctor said it was caused by high fat foods and lack of exercises. I guess spending time on riding bikes, running, walking or playing basketball is not that all bad. It could save our lives.

As long as you can do it without getting hurt, you are not too old.

I'm smiling because 2 years ago I was a couch potato and not a young couch potato either since I am on the wrong side of 50. The MD's prescription - walk. I walk every day and now my daughter walks with me (in addition to her bike riding and swimming).

That said, being able to balance that there may be days when "down time" needs to happen is not a bad thing. A 4 mile hike if one or both parents are down with the flu or similar is probably not going to happen.

I too think Jim's comment is v perceptive that the car may well be like the squeeze machine.... (come to think of it, I don't mind sitting in parked cars either - I do feel safe, and it is nice and peaceful and indeed it is like being in your own little world). I think your family is amazing the way you do so many walks, trips to the beach and other activities to keep Charlie active, occupied and enjoying himself!

Wow. I just got to know your blog (through a link in your before-last Care2 post) and I've been reading spellbound ever since. I do not have kids, or know anybody close by with autism, but my Mom has been bipolar for as long as I've been around (nearly 40 years now ;-)).

Reading and feeling with your words I can think about her, and think about myself and all the emotions I have that I cannot reach, cannot handle and don't know to get closer to. Thank you for all your effort of putting the stories 'out here' and love for all three of you.

And me approaching the big 5-0 with each passing day!