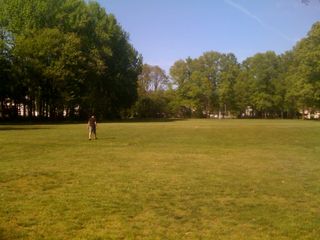 I've been writing about Charlie making some progress with things, specifically his ability to be accommodating of our---of other people's---requests.

First example of Friday occurred at 3.30am. We heard rustlings from his room and then chattering and then the thump that means Charlie had gotten out of bed. Jim and I both got up as Charlie was getting dressed and said something about the timer and Charlie went back into his room and stood by his bed. And said, "bedtime." And got back in bed as I set the timer for 2 1/2 hours, as that would get us nearer to 6am. I gave him one melatonin and he, after at least a half-hour, he went back to sleep. Which is something new indeed, as Charlie waking up at night has, until recently (this past week), has meant Charlie was up for good until, that is, he crashed (sleep-wise or behavior-wise) later in the day.

We weren't surprised that Charlie was very slow to wake up and get out of bed at 7.30am. I opened his windows (his room faces the street) and pulled up the blinds, set the timer. Closet doors and drawers were opened and closed; I loaded the white car with Charlie's book bag and mine with my books; Jim hurried off to catch the train. I reset the timer a few more times, for shorter and shorter increments of time and then I went into Charlie's room and he was standing beside his bed.

He was soon dressed and had shoes and socks on and had gathered up his worry beads and a few small tsotchkes (including the old garage door opened to my in-laws' garage). He put the key in the lock (which is a bit of a mean feat, as there's nearly a dozen keys on my key chain: most for work) and the tsotchkes in the backseat of the white car. I locked the door and handed Charlie the keys (which seem to have assumed tsotchke status; Charlie keeps better track of them than me).

Charlie stood, a lean beanpole boy, on the sidewalk, elbows crooked and hands pressed just below his ears.

We most certainly had no time for a long walk. Even a short one would make him pretty late for school and me, well, it's just about the last week of classes at my college and I really needed to discuss the Romans' over-scrupulous legislation of marriage and women's legal rights in the Augustan Age, while the great epic poem of that age, Virgil's Aeneid, might be said to present a rather ambivalent view of marriage and even of mothers.

I pulled out a piece of paper and wrote:

I read this little schedule out loud to Charlie and handed him the piece of paper, which he promptly stuck in the backseat. Then he said:

Which I made some haste to do, closing the driver's side door and fastening my seatbelt before Charlie could ask. While I was doing this, I heard some stomping of a ritualistic sort and then Charlie shutting the passenger side door wham and then, having seated himself, a second wham to close his own door.

It was late enough that Phil Schaap had already started Bird Flight, his show on WKCR. Thursday had been Duke Ellington's birthday and we'd listened to the WKCR birthday broadcast but Phil was now back to Bird. For those of you haven't (like Charlie) become fans, Phil's been playing all of Charlie Parker's recordings in chronological order. When I turned on the radio Friday, the 30th of April, he was talking about a Saturday rehearsal on which Charlie Parker could be heard saying some phrase that Phil first noted sounded like "tempo divine." What Charlie Parker meant by "tempo divine" became the subject of some speculation by Phil who, after mention of how hoarse Miles Davis's voice became after throat surgery, played the few seconds of the rehearsal during which Charlie Parker may or may not have said "tempo divine" at least ten times in a row.

I couldn't help but to listen closely. Turning my ears to blurry traces of sound that I know are words, amid lots of other sounds (noise): This isn't just a habit, it's a way of being with Charlie, whose speech is still under-articulated, especially the consonants.

Charlie and I listened to Charlie Parker saying four syllables over and over and Phil speculating: "Tempo in mind? in mind? Tempo divine?"

I could see how saying "keep the tempo in mind" would make sense for someone to say at a rehearsal but Charlie Parker definitely said "tempo" and then a word starting with a /d/---to my ear. To my mind, 'tempo divine' works (for what it's worth) fine.

And, too, 'tempo divine' also serves a further purpose.

'Tempo divine,' that's the rhythm of these past few days of walks (2 long ones + a bike ride on Friday) and wakings, of finding a way out here in this world, with Charlie.

And the music can't be beat.

That's great that Charlie was able to get back to bed.

That timer also seems to be helpful.

A question - since you're using a timer - are you using it, perhaps with an additional visual to denote the passage or interval of time? Does Charlie have familiarity with clock and time telling?

Here's my thought (as usual, said in the absence of knowing the backstory): It "sounds" as if he is kind of dependent on someone telling him what to do/what you're doing, and that the writing is an effective prompt is super, but I'm wondering if time is/could be integrated into this at some point so that he might have more control of why this happens this time and not that time. Such as perhaps timing your walks, which in general last about x minutes, and the time is x o'clock...so there would/would not be enough time to do so, and also at x o'clock this happens (I'm kind of guessing that they must do similar at the BAC if they use a schedule system). Anyway, just thinking aloud and probably all wet for one reason or another.

Hope you're having an excellent weekend.
Take care.

He's semi-dependent on someone telling him what to do---he certainly has his own ideas, but needs suggestions. (Right now, most of his requests are to do walk, bike, car---we're interceding with some requests for relaxing/resting.

He understands about the timer numbers decreasing and has been working on telling time (digital). I'm not sure how much he connects the numbers on the clock to the actual passing of time, though.