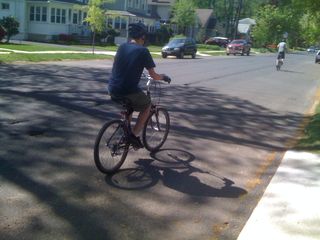 'Yes, house.' That's a new phrase Charlie's been saying when we're back in our house after the various walks of various lengths, bike rides, drives-here-and-there-in-New-Jersey. I'm taking it as a quite positive development as mentioning of being back home when we're out always gets one answer: "No home."

Though there's a difference of wording, as you may have noted:

The 'yes, house' (the comma marking a little pause) is Charlie's own, self-initiated phrase. 'No home' is his response to us saying (generally while in the car) that we're going home, or at least considering the possibility of heading towards eventually.

'House' refers to the actual, physical, building---a pale yellow 1920s-era 2-story---that has been ours since February of 2003 (though we didn't always actually lived in it from June 2006 till a couple of months ago, due to our search to find the right school for Charlie). 'Home' is rather a more abstract sort of term, as I see it, about the idea of inhabiting a place, a place that's more than shelter or storage, but a place where you feel comfort, secure, a refuge, as in a 'homebase.'

It also occurs to me that, over the years, we've rarely said something like 'let's go back to the house' to Charlie, but said, on autopilot, 'let's go home.' Perhaps Charlie's a bit more comfortable with talking about the actual place we're going to, rather than some fuzzy concept? Too, the phrase 'go home' comes with a host of associations and, all too often means, 'forget about that thing you wanted to do, that's it.''Home' connotes something disappointing. Not that we ever tried to foster any such associations about home. In the heat of the moment---say you've had a tough moment at a Target or in the car itself---getting back to home can seem a most longed-for thing, even if your child is in a decided state of Major Unhappiness. At least when you shut the door, you're back in your own space.

With our regular peregrinations and perambulations on foot and (for Jim and Charlie) on two wheels, we do spend a fair amount of time out of our house. Thursday started at 5am for all of us, with a walk that revealed the sun rising and a full moon still hanging in the sky. It was warmer than yesterday but still coolish and Charlie helped himself to a long hot shower once home. He got dressed and stood looking at his bed, and then shot me a glance.

I told him he could certainly go down and sit in the car till it was time for school, which he proceeded to do (while us two remaining inhabitants got to experience slightly colder showers) (such is a parents' happy lot!). He and Jim dropped me off early at the train station and I went to give my Latin students their Final Quiz (which was, I'll admit, a bit of a taste o' the final).

Jim stayed up near the Big Autism Center which was holding an autism walk 'round the school grounds in honor of Autism Awareness Month. Charlie and his class all wore t-shirts tie-dyed to match (team spirit, you know) and did three laps around the school, for a total of a mile. There were cheerleaders from the high school and other festivities; Jim texted me that he was walking with some parents we've met from previous classrooms Charlie's been in (it is a rather long list) and, too, my blog. The sun was shining and there were banners and flags strewn from the lampposts. The school's located off a road that's mostly busy during commute times:  Always good to be out (of the building---it occurs to me, people must drive by and wonder, what's it like in 'there'), and aut.

Charlie got tired and cried a little at the end, Jim told me, which we all agreed was more than understandable---it wasn't his first round of exercise, after all.

And it wasn't his last, of course. Charlie took a 1-hour nap around 5pm, to be awaken by the iPod touch and the Duke Ellington birthday tribute on WKCR. Jim had just come home when Charlie was getting up and calling for his bike helmet, and off they went. I headed out, too, to go see a senior student at my college perform a voice recital. Charlie and Jim were still out on a walk when I came back and it was after they returned, and after Charlie snacked and brushed his teeth, that he said,

With his hands tucked under his chin and a little smile.

I think he's glad to be here.

I've wondered about using the word "house" or "home" quite a few times. It's easier in Greek, just the one word. I have been known to sing "Our House (Madness) to encourage Dimitri along those last 50meters to our house. Going home has negative connotations for him too, even if he was unwilling to leave the house in the first place.

Guess it depends on context and experience - if going "home" is a relief or end of things or associated with trouble...or if "home" is even associated with a physical thing, or if there've been multiple homes - which one?

House is more specific and certainly concrete, and based on affect - "House" sounds like a positive place. Good, and interesting that Charlie initiated that.

I wonder if that crying was real physical fatigue or a kind of mental fatigue translated - I've seen kids who would run around like fleas on a griddle cry and drag themselves along like the dying when the fun thing was turned into a demand - your agenda, not my agenda.

I think Charlie means our actual house. Versus "grandma grandpa house" = my in-laws' house that we lived in. He says '26' to refer to the apartment that we rented---he kept saying that while we were still living there and then one day we realized, of course he was reading the numbers on the doors.

I like the song idea! Lately Charlie has been running right in after his walks. Lately he's only wanted the long ones, though, and after those sitting down for a bit is everyone's preferred.

And I think it was mental fatigue. I also figured Charlie must have been thinking it was strange to be walking around the parking lot instead of the usual at school, and to see Jim there and all the parents, not to mention the noise of cheerleaders etc.