A Good News Post (or, we sure live near a lot of grocery stores) 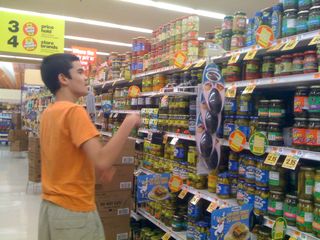 Although, Wednesday didn't start in such an exuberant YAY! fashion.

Having written about what a great job Charlie was doing not over-stuffing the backseat of the white car with stuff what did I see when, at 7.30am on Wednesday, I peered into the backseat but five blankets, all balled up into little colored rounds and shoved on the floor behind the driver's seat.

Both Jim and I (separately) attempted to dissuade Charlie of bringing all those blankets. The answer was a resounding and loud

further accentuated by the slamming of the left-side backseat door.

There followed a parental debate about whether we should or shouldn't be more insistent about lessening the blanket load: Should we let be about the OCD? If we 'let be' was this the start of yet another new obsessive 'need for order' that would---like always driving certain 'that ways'---lead eventually to a big 'disaster mess' (as in, ER waiting room for hours sort of thing)? But it was so hot and humid and Charlie'd been extra hummy and not at ease for the past day plus, weren't these extenuating factors that should make bringing extra stuff into the car 'ok just this once'? But is there ever a 'just this once'......

(Just so you get a picture of the Really Intellectual Discussions we have around here.)

I had already set the timer for a half-hour. I added a piece of paper on which I wrote: '10 minutes then 2 blankets back in the house.'

(Obviously, I was secretly scheming to yank 3 or even 4 blankets out but 2 seemed more reasonable and the air already felt so heavy.)

I put my coffee thermos and Charlie's blue bag into the car and opened the back door. 'No,' said Charlie.

I picked up the piece of paper. 'But the schedule says 2 blankets have to go back in the house.'

Charlie handed me a small  blue fleece blanket and (with what I'll describe as 'an overly exasperated sigh') shut the door and I went into the house with the blanket waving the blanket at Jim: One is better than none.

Anyways, as far as the 'good news' (yes, that was all just a proempticon to the actual 'meat' of this post).

Several hours later when I picked Charlie up after school, we made a mildly revolutionary left turn out of the parking lot of the Big Autism Center rather than a right turn. Charlie has been directing us to make the latter for some months. A left turn means a shorter ride home and so is (from the driver's perspective, at any rate) preferable. I was certainly glad for a change and Charlie didn't seem to mind.

And then, a couple hours later, after a very warm walk (it was in the low 90 degrees, Fahrenheit), Charlie and I had an impromptu, and very pleasant, time at one of our local grocery stores.

I have to say 'one of' because we live within a 10-minute radius of a few: two branches of the one with good prices and the widest variety of groceries including sushi, and which Charlie had a neurological storm at several months ago so we're not inclined to visit (plus the store no longer has the same nice elderly man making sushi; he was replaced by some conglomerate from the Midwest); a sparkling branch of a smaller, local chain that was the site of the incident of the red brownie box (i.e., forget going into this store for awhile); a very popular branch of a national chain that, among other things, sells exceedingly cheap bottles of wine but tends always to be crowded and has a relatively small-sized space, so it's not an ideal spot for Charlie (though he does like the rather mass-produced looking sushi); a branch of another large chain that doesn't have quite the 'panache' about its name that the other stores in this too-long list do.

We ended up at the last store because Charlie doesn't have much of a history there as it does not sell sushi and hence has been of little interest to Charlie, at least until recently.

Charlie told me 'basket' and got a shopping basket and, on seeing a display of on-sale Saltines, 'crackers' and got a box. He checked out the watermelon but didn't get any which was very well because yours truly had, earlier on Wednesday, lugged in a bowling-ball sized one that probably cost less than the cups of cut-up melon on display. He asked for 'relish' and I wandered ahead to find it in aisle 17 only to see Charlie tarrying around a case of bargain DVDs. A tall woman walked by, and paused and said something to a man (he came up to about her shoulder and was wearing a big t-shirt and shiny, loose shorts) who was slowly pushing a cart. He didn't say anything and kept walking slowly in a straight line, with the cart.

Charlie helped himself to a jar of (the only brand of) relish (that he'll eat) and then a bottle of ketchup (after checking that it was ok with me). We ambled into the frozen section. 'Fries' said Charlie and, before I knew it, he'd walked right in front of a man (who was a couple inches shorter than him) in a baseball cap, to open a freezer case and retrieve said item. The man laughed and, catching my eye, indicated 'no problem.'

I found the aisle with boxes of Capri Suns (the one thing that we actually really needed) and carried two boxes to the check-out counter. The clerk emptied the basket while Charlie went to get a soda. She held up a primary colored DVD (with photos of four guys, each wearing a different colored long-sleeve shirt) and my surprise at seeing it must have registered on my face because she said, 'You want this?"

'Sure, yes,' I said, running my ATM card through the machine. 'We already have a couple of copies of it.'

She scanned the Sierra Mist Charlie had gotten and laughed. I did, too.

I carried the bag with the two Capri Sun boxes back to the car and Charlie took everything else, along with his green drink and back into the muggy night, to the sound of Phil.

(He was doing a special live broadcast Wednesday evening---he had come back on the air Wednesday morning and, while Charlie grinned and rocked up and down, explained that he'd been ill the past two days.)

(Obviously, his return was the best news of our good news day.)

Looks like Charlie has lots of shopping skill. Bravo for being able to separate from him in the store (unless I misunderstood). Do you think he is ready to try exchanging money for the items? (Or maybe he is past that stage.)

One is indeed better than none!

Also enjoyed your description of choosing a route and a supermarket, I'm kind of trained to think that way too.

Yes, he did get separated from me, though always in sight.

I think I could give him the money---he does that at school---I confess to often not having enough cash and just using my ATM card!

I went through the litany of grocery stores litany (sorry if it was confusing! there are actually a few more stores around here.......) because I go through it a lot in my head, when I'm trying to figure out where Charlie and I can go 'without incident.' I guess I always have a little hopeful thought that we might go some place that we used to go, but these days I've just preferred to ere on the side of caution. And Charlie seemed quite happy with our purchases, some of which were immediately opened once home and eaten......

Yeah that's our sort of intellectual discussion too!

Another choice topic would be 'now how did YOU let him take all that stuff into the car in the first place?:

This particular supermarket is also, actually, the closest to our house. No more than a 10 minute walk.

Though of course being in the US we drive----makes carrying back all those juice boxes a lot easier!

He really is making good progress. We struggle with the "let be" question and the OCD all the time. I find it is a delicate balance, and we tend to allow some, restrict some, and constantly reassess as we go. Some days, we just all need more of a circle of protection around us than other days. If only "one incident" were not enough to cause a habit! Ah, life.

What would he do if you distracted him and took the blankets out of the car when he wasn't looking?

We have those Really Intellectual Discussions, too. Love it. I love that he's sneaking in more blankies than you'd like AND he knows it!