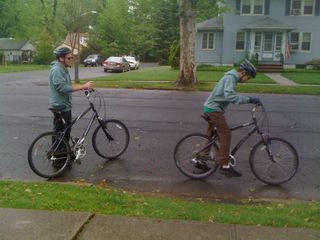 I did something momentous today, at least for our household.

I went to the grocery store and ordered Charlie a birthday cake. Basic white buttercream frosting, vanilla cake, chocolate fudge filling, and 'Happy 13th Birthday Charlie' to be writ in blue letters. I asked for balloons instead of flowers. As I left the store, wondered if I shouldn't have asked for I don't know, a star? ocean waves?

We'll just have to save those for the next birthday cake.

Charlie never had one of those cakes I remembered from my childhood, all gloppy and sugary with a high proportion of frosting to cake, and little plastic figurines amid mountains or rainbows or what have you. We'd put him on the gluten-free casein-free diet when he was just two years and a month old, so bakery cakes were a nope. I made a lot of cakes, mixing out the rice and bean and tapioca flours; some bakeries have opened around here that specialize in making all items gluten-free and I know of a couple of online sites too.

But nothing beats 'the real thing.' Somehow Charlie always knew, the baked creations he was getting didn't look like the ones in the supermarket display case. (Which contains the Platonic image of cakeness, right?) He actually really isn't into the cake part of the cake, but the frosting.

And then there's the whole birthday thing. Charlie hasn't had a proper party since he was 7, when he was a student in an autism classroom in our town's public schools. It was a swim party, with sushi ('course) for Charlie and pizza, and a sprinkle encrusted soy vanilla ice cream cake (I made it, with a springform cake pan). It was a small party and Charlie had a great time, and then, as we loaded the black car with the presents and leftovers, he banged his head on the car and cried.

Over-stimulation? Despair the fun was over?

Prior to the party, Charlie was a heap of anxieties. If we said 'birthday' or 'party' or 'cake' he went to pieces. His teachers and therapists learned to avoid those words and we did too. So, accessing all of this, we afterwards had small birthday celebrations in our house with my mom and dad and at school with my bringing in a simple cake or pan of brownies, and kept things lowkey.

We're planning to have a party for Charlie on Saturday afternoon, his actual birthday. Lowkey remains the word: It'll be a sort of open house, with sushi (birthday boy should be fêted with his favorites, no?) and other things; we've invited some friends and their kids, some of my students (it's exam time so I guess this would be the birthday party as study break). Knowing Charlie's latest propensity for being on the move, this could be a movable birthday party; Jim and I have planned that one of us will remain at the house, but all guests are certainly welcome to walk with Charlie. (If you're not up to the entire 4 1/2 mile loop, there are a few places where you can turn back.) And if you've got a bike and are in the mood to ride at a fast pace, guests could join Charlie on his peregrinations through the neighborhood.

Wednesday he seemed to be taking a bit of a break from the rather intense exercise regimen he's been on of late. After some days when we were all convinced, summer has arrived, it's gotten coolish (below 50 degrees, even); can't blame Charlie for wanting to dally under the blankets in the morning. Once home from school, he didn't---first time in a long time---ask for a walk, but sat on the couch and used the computer.

Though when Jim came home and mentioned a bike ride, Charlie immediately said 'helmet' and 'all done' (about the computer). He donned his sweatshirt (so did Jim) and gloves and off they went.

Things have been sad here with my mother-in-law's passing. Her funeral is Friday morning and there's a lot of feelings circulating around here, to say the least. Our daily rounds, afoot and a-bike, are a particularly, with little spoken, are proving sustaining for Charlie and, yes, for the tight team o' three.

Let me start by wishing condolenscences to your Jim on the passing of his mother. I hope that he and the rest of yur faily finds solace and peace soon.

On a happier note: woohoo Charlie. Happy Birthday. It sounds like it will be a great day and that everyone, including Charlie will have a great time. So party on and happy teenager:)

It sounds like a wonderful birthday! Low-key and flexible is not a bad thing at all...I'm glad that you have such a great group of friends and family.

Sushi! Sounds like my kind of Bday. Only with self made cake made by me.

Now I want a cake with my special awesome super chocolate frosting.

Happy birthday to Charlie! He must be pleased to finally be getting the Ur-birthday cake. If the frosting is the main point, why get involved with the gluten-free procedure?
I think it's the appearance of the cake that kids like most. My kids have had some astonishingly beautiful cakes made at a little bakery in a small town near where we live. My younger son had a surfing cake one year that Charlie would have liked. It had with waves and sand and palm trees, all made of frosting or marzipan. He liked it so much that he didn't want to cut it!
It's amazing what can be done with cakes, as www.cakewrecks.com can attest.
Do you think Charlie lost it after his seventh birthday party because he didn't like the charge in routine and he was puzzled by what he was supposed to do at a birthday party?
I've heard parents of children with autism complain that their kids aren't interested in toys or electronic games or clothes or any of the conventional things kids usually want as birthday gifts. Is it difficult to shop for Charlie?
I hope he has a happy day and I hope Jim is coping okay with the loss of his mother.

Charlie only seems to like vanilla/white frosting; I'll go with chocolate!

I love that you've changed the birthday celebration to fit with what he likes: sushi, moving around, walking. You are fabulous!