Home Archives Profile Subscribe
Quite Sociable, If I Don't Say So Myself
Iconic 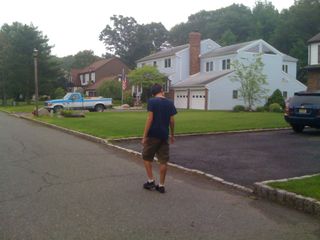 At Charlie's spring concert last Wednesday, one of the classes of high school students sang the first verse from 'Camelot,' the Lerner and Loewe musical that is sometimes (accurately or not) seen as a symbol of John F. Kennedy's presidency; of what might have been achieved. The first student who performed did most of the first verse:

A law was made a distant moon ago here:

July and August cannot be too hot.

And there's a legal limit to the snow here

The winter is forbidden till December

And exits March the second on the dot.

By order, summer lingers through September

Hearing these words---about a 'congenial spot' that's perfect to live in, so perfect that hopes it might exist forever---I felt a heavy dose of wistfulness.

There were moments when Charlie was much younger when things would seem to have reached a certain level of stability, an even keel, a 'just right': When we'd found a school that he was happy in and that accommodated his needs. When he was having minimal behavior trouble there and at home. When we were able to do all kinds of things from eating in restaurants to walking around New York to flying to California on a non-stop flight.

(Well, to be honest, I never found any of those flights idyllic, but that was at least partially because airplane travel for 6 or 7 hours was tough for Charlie and for anyone in general.)

At those moments, I'd feel like I wished we could just bottle up the moment---that beautiful happy gold-bright on Charlie's face as he beheld the ocean waves, or showed off how well he could ride his bike to a documentary film crew---and keep things that way always. Of course, reality would arrive in the next few seconds and I'd then think, ok, so we can't keep things like this forever, but can't we retain some of it?

A lot of these musings were tied up with the pang I felt in seeing Charlie getting older and bigger.

I'm sure every parent, still sensing the wriggling baby in her or his arm, feels this. But a child growing up can evoke bittersweet feelings in a parent when that child is disabled. On the one hand, it's wondrous wonderful that a child who has had so much against her or him since birth has come so very far. On the other hand, that child may well, like Charlie, need lifelong support and care, and  parent shivers, ducks, feels a pit in her or his stomach, in thinking: What's going to happen to my child when we, his parents, are gone? Why can't we keep things always as they are now?

Charlie's current school situation has been working out very well; I would even say much better than we had even thought. He's down to wearing the helmet (which is no longer the blue thing with a face shield but a karate helmet) for a half-hour in the morning. He definitely has a number of pre-vocational skills down; he says 'hi' and 'thank you' and then 'I'm fine' spontaneously to people, sometimes; he's handling waiting thanks to a timer and written or visual schedules very well. Not only does he like going to school but every time we have a meeting, his teacher and the behaviorist and the principal say things like, 'we like him so much!.'

At home, Charlie isn't only more independent about things like getting himself ready for school (the only thing he needs our urging to do is to get out of bed some days; he handes getting dressed and ready---showering, even---on his own) and getting himself snacks. He wants to be independent. He asks for 'help' or 'I need open please' but then he tells us to go and does the rest of whatever he needs to do (getting silverware or pouring himself a drink) on his own. He asks for walks and bike rides in part because he seems to be understanding, regular doses of exercise help him to work out whatever anxiety, rage, etc. led to 'difficult behaviors' (like self-injurious ones or emptying cabinets and throwing things around the kitchen).

It's not a very clear picture, but I'm starting to get a sense of what Charlie's life as an adult might be like.

So the question is, how can we provide staff and supports (not to mention a place to live) who will do what Jim and I do, and treat Charlie in ways the respect his sense of dignity and acknowledge his differences, his needs, his beautiful uniqueness?

This is the question that tumbles around in my head all the time. It's a question that researchers and research studies strive to answer. I've been following reports on research presented at this year's IMFAR conference (and especially noting sessions on 'Measuring Outcomes and Addressing the Needs of Adolescents and Adults with ASD' and 'Medical Care of Children and Adolescents with ASD: Findings From the Autism Treatment Network'). Even if studies and statistics and pilot programs point to answers, translating these into the reality of what each of our children will need---finding and training staff and keeping them, finding a place for them to live, finding them work (and meaningful work) and activities----it is a gargantuan task, whose concrete realities take time to achieve and which unroll in a far messier fashion than anything one reads about in an 'outcomes prediction.'

Still, I know Charlie, and we, have benefited from 'research,' in (for instance) the form of the medications that are more tailored to his neurology, and regarding the workings of his brain---those 'neurological storms' I keep mentioning---and that, along with a better (though ever in progress) understanding of how to teach him, all of this has contributed to him being able, still, to live with us and go to school in the community; to have a homey Sunday at home with a fair amount of rest and going out to assuage any restlessness. Things these past several weeks have been more or less 'pretty good' as in most peaceable. It's no glittering, idealized Camelot that we live in but one with horns honking and dogs barking as we venture through the streets; where there is contention and strife and certainly sorrow.

It is a world in which we live with Charlie, and in which Charlie lives with us.

Despite all the questions you pose, your last sentence is the answer (which I expect Jim would answer the same) - someone invested in (who loves) Charlie to continually seek answers for him.

Charlie is most fortunate.

Hmmm... your analogy to Camelot resonates with me. There is an outside world that rings true, moments or peace and moments of strife, but we live in our Camelot over here too. Thank goodness we have been able to have it, though. I can't imagine Adam's "outcome" without having been able to live at home. Thank goodness we are living in a time when Inclusion is not yet full-blown reality, but is on our minds. Perhaps Camelot is expanding, then as well.

Did you imagine that Charlie would be further along at 13 than he is?

@Estee, I like much the idea of Camelot 'expanding.'

@Barbara, thank you! I didn't know where this post would end up when I started writing it but the last sentences seemed just the right way to close it.

@Jill, huge question! I'll need to write a post just to answer it.....

Adolescence is tough for all kids (and parents!). I guess we all just have our own special challenges.

I would look on this phase as a stormy interlude, that will ultimately flow into a more peaceful, easy feeling maturity.