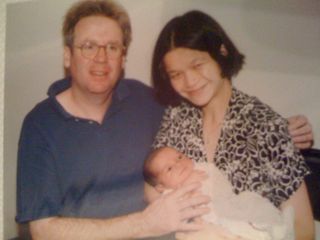 Ok, technically he's not going to be 13 until 8.57pm tonight, the 15th of May, 2010. I was in labor for most of the 15th of May, 1997 (if you really want to know, I can write more about it---doesn't seem the right topic to go into on Charlie's first day of teenagerhood), so I guess the celebrating can start a bit earlier.

13 years old. Teenager. Where did the years go----I sometimes still find myself crooking my left arm to support my baby Charlie, who even then I felt hard-pressed to call to refer to as 'little' because Charlie was 21 1/2 inches, 8 lbs and 3 oz when he was born, with a big head and big feet. (He was just about a couple weeks old in the photo above.) I carried Charlie plenty (my Mom had advised me to do so, after she'd been told she spoiled my sister and me by carrying us too much so she didn't, and then we got too big for her to carry). (I assure you, Mom carried Charlie to her heart's content and good thing because she's shorter than me.)

Frankly it feels as if Jim and Charlie and me have already been together for a full lifetime. A great great deal has happened in Charlie's 13 years: He's lived in at least seven different towns or cities and moved at least as many times. He's had over 50 teachers and therapists, starting from the time he was 2 years and 4 months old. He's been to at least 10 different schools. He's been to both the East and West coasts of the US, as well as the Midwest, where he was born (though he's yet to be out of the country---I guess I might start to work on getting Charlie a passport). He's faced some major challenges, due to his neurological, communicative/speech, sensory and cognitive make-up. He's learned to ride a bike and to swim in the ocean. He's persevered, kept trying: Charlie senses that we wish for him to learn, to grow and change and 'just give it a try,' and he truly aims to please. He is not, I really believe, a quitter.

I love my boy for all this.

Most of all, we love him because he's Charlie, plain and simple. Both Jim and I will always know that life is good, is better, is as good as it gets because our lovely boyo entered our lives 13 years ago and continues to teach us, to guide us, to show us the way and to show us new ways of thinking, communicating, and simply being that we never would have learned without him.

As I've written before, it's because of Charlie---because of our wanting to find an appropriate education for Charlie---that we came back to New Jersey from St. Louis in June of 2001, with only one half-year job for Jim among us. I'm forever glad we did, however many challenges there have been.

One reason we were glad come back was because Jim's parents were living here. Jim's mother was adamant about staying in New Jersey, where she was born and where her two sisters (she was the eldest) lived. She was a regular reader of what was then called the Newark Star-Ledger; many of Jim's mother's relatives lived in Newark and neighboring Harrison. Because we were no more than 45 minutes away from Jim's parents for the past 9 years, Charlie got to see them quite a bit; for awhile, we had Saturday dinner with them almost every weekend, with me cooking while Jim did their grocery shopping.

Yesterday, the 14th of May, was the day Jim's mother's funeral was held. It was a quiet event in the church in their town.

Charlie was not there. He was only 10 minutes away at school, at a special pancake breakfast: There's a section of the Big Autism Center that was built to look like an actual New Jersey diner. Some of the older students make the pancakes, serve them, clean up, etc., and the different classes in the school get to go, along with their teachers and aides and a few visitors. Of course Jim and I were not able to attend but the thought occurred to me, had Grandma been alive and able, she would have probably gotten a kick out of being at a pancake breakfast (and in a diner environment, no less) with Charlie. (Jim's mother had a dormant, but very definite, mischievous sense of humor.)

Yesterday Jim picked up Charlie after school and took him out for a special pre-birthday-boy treat of an afternoon burrito. Afterwards they went home, hung out (it was muggy and thunderstorming), and then they went on a bike ride and a walk.

So where was I?

After the funeral, I found myself going to Manhattan. Jim needed to be around with his family but he also had an exam Friday afternoon and, not having been able to fund someone to proctor it, I was duly dispatched with a stack of blue books and a folder of student evaluations. I felt a little odd to be in the city, after everything. Too, I was by myself in New York, with Jim telling me to take my time, walk around, go shopping.

On finding myself out in the city solo, I had a thought about how to commemorate my mother-in-law. I texted Jim to find out the address of the building where Jim's mother, before she got married, had worked in advertising for WOR. 1440 Broadway he told me, just below 42nd street, so there I went: 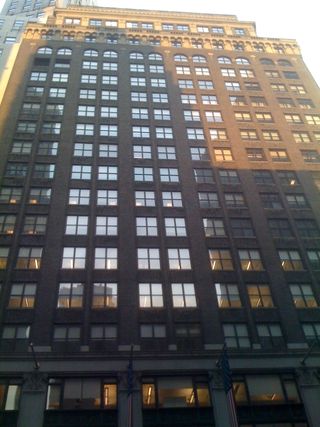 To get to the building, I walked through the theater district under the marquees for Billy Elliot and the new Addams Family musical, and thought about how, once upon a time in Pittsburgh (circa 1961), Jim's mother had taken a 5-year-old Jim on the bus to see a production of The Sound of Music. Jim remembers being terrified when he saw the Nazis on stage searching the convent for the Von Trapp family: 'When you're that age, Kristina,' he said to me, 'you think it's really happening.' When I asked him why his mother had gone to the musical, Jim replied that it'd been something to do. His family had recently moved to Pittsburgh because the large (and no longer in existence) chemical company that Jim's father worked for had transferred him there and his mother was far away from her family and friends, all of whom were in New Jersey.

(And what do you know was across the street from 1440 Broadway but a branch of the very fast-food Mexican restaurant that Charlie had gotten a burrito from off a state highway in north central New Jersey.)

Jim texted me again that a large triangular package had appeared at the door. I wrote back, it's one of the posters we ordered for Charlie's birthday: 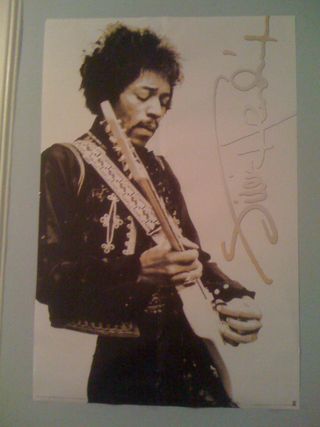 We broke with birthday present protocol and opened it up, and Jim promptly taped it to the wall across from Charlie's bed---and then got into, what shall I call it?, interior decorating/let's do something about these bare walls mode and unwrapped a painting that's been in cardboard and brown paper since we lived in University City, Missouri, in 1998: 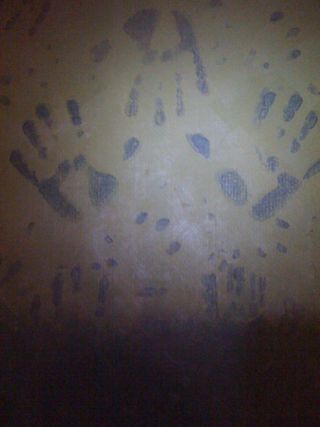 It's called Bob's Conga, and Jim's best friend, Michael Young, painted it. We kept it wrapped up throughout our many moves and then (le sigh) because of worries of the painting being, er, knocked around if it were hanging on the wall.

I'm going to wait to take a picture of the painting (it is a large canvas) until it's daylight, but the above is a detail from the center.

Three handprints (made with Mike's own hands in paint) grouped together and more moving from them.

1440 Broadway once home to radio station WOR where Charlie's grandmother once worked.

Jim and me, happy new parents with a baby who had a lot before him that we had no idea of.

Four images to illustrate the life so far of a boy named Charlie Fisher, on his birthday.

Happy Birthday, Charlie!!!! (said enthusiastically, but sotto voce, in order not to startle).

Hope you have a great day!

Teens - wow, it's one of those moments that would inspire me to think "how did I get here?" (in a good way, I have no problem with "here").

Love the photo with baby Charlie:)

Happy Birthday Charlie! (and a Jimi Hendrix poster is one of the better ways to celebrate becoming a teenager that I can think of)

Best wishes to all of you, and you know that I'm wishing you the best for the teen years!

Oh, this post is loaded with so many things ... I can't even absorb them all.

Happy Birthday to Charlie! I hope he enjoys all your celebrations!

And how are you dealing with all this?

Very, very Happy Birthday Charlie!!
My thoughts are with you today, praying to God to keep you healthy,joyful and united.
The photo with baby Charlie is just charming!!!

Those photos illustrate Jim's life, as much as Charlie's. The building where Jim's mom worked in her near-mythical days of radio at WOR; the painting by his great friend Mike Young; Jim looking stupifiedly delighted with his ecstatic wife and calm little-big on; Jimi, in all his glory , the object of shared admiration between father and son - all of these talismanic images are therefore as much Charlie's legacy as they are representative of Jim's life./

The braided lives of our family members and ourselves, with all those shared stories and delights and adventures and overcome struggles - these are the mystic cords of memory (please excuse my Lincoln paraphrasing) that bind us to our home on earth.

Thank you so much for sharing all this with us. May the Tight Team of Three continue to flourish!

Happy birthday to Charlie and his parents!

Happy birthday to Charlie and congratulations on officially having a teenager in the house! [Insert ominous sound effect. Okay, I kid.]

Thank you for sharing such a lovely family photo with us.

Many happy returns for all of you! ditto this post celebrates many lives.

thanks so much everyone!

yes, I think I can hear some rumblings of some sort of other---hopefully guitar riffs!

@Louise, when Charlie was born, Jim's 2nd book, Dr. America: The Lives of Thomas A. Dooley, had just been published and reviewed in the NYTimes---it was a lot to celebrate!

Sometimes I look at photos of Charlie as a baby and it seems like a rather mythical time, all 'pre-autism' (though I do think Charlie was born as he was---his development was always delayed, but in subtle ways).

I also look at Jim and me and think, ha, they really didn't know what they were getting into!

And I also think, that photo was taken in our kitchen in a drab apartment in Kirkwood, Missouri, on the outskirts of St. Louis. We've definitely come a long way.

Belated Birthday Greetings! I would have been celebrating my 13th wedding anniversary the day you were born.
Have fun with your next 13 years Charlie!