Home Archives Profile Subscribe
Each to Each's Own
Charlie's Grandma 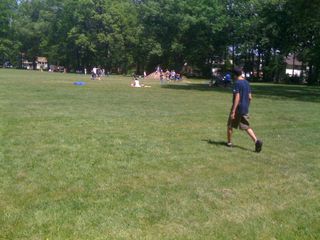 Saturday started with rain showers and clouds; became gloriously sunny with a blue sky to match; ended with a magnificent wind sweeping clouds and dirt and dust around and with rolling gusts reminiscent of what it's like at the ocean. We walked through it all, Charlie leading the way.

He seems to have evolved into the adolescent boy's complete imperviousness to temperature and climactic changes. Once he's out of bed, Charlie pulls on a short-sleeve t-shirt and longish shorts and that's it for the day.

I remember wondering how the boys in my junior and high schools could wear the same clothes everyday, regardless of the weather or the occasion. Now as the mother of such a boy (and one who's overly prone---understatement---to habit), I think I'm starting to get an inkling as to why:

Why complicate things by bothering to wear anything else? So many other things to devote one's attention to.

(Like noting how to cross the field we usually walk straight across the middle of when there's a Saturday soccer game going on. Rather than issue too many verbal directives, I ran ahead of Charlie and around the white lines that indicated the playing field, and, with occasional glances at the action to his right, Charlie followed me.)

(Like making sure that certain dogs in certain houses are clearly behind fences, closed doors, or windows, and then let them bark.)

The t-shirt and shorts thing does make doing the laundry a much simpler task, and I can assure you that nothing Charlie wears warrants the press of an iron. I've inherited my pick of the shirts, shorts and pants that Charlie's outgrown, including the black 'got rice' t-shirt (with a rice cooker on the back---if you're thinking, what's so special let alone amusing about that, all I can say, it must be an Asian thing---I got at least four rice cookers as wedding presents and I still have at least two). Charlie's is a perfect slouch-around wardrobe that, from a New York Times article, would be just what comedian Sarah Silverman requires for her 'adorable look' of clothes that are just those a 14-year-old boy would wear, Adidas and t-shirts with numbers. (Charlie, though, pretty much only wants to wear his black slip-ons and seems indifferent to the designs on his shirts.)

It being Mother's Day today (and as I said more Mother Day-ish sorts of things in last Sunday's post), I'll posit, wearing your almost-13-year-old's hand-me-ups while you're out on a 4 1/2 mile walk during which there's a sudden rain shower and you've no umbrella and you just keep walking, in the steps of your son who's got a wet shirt and could clearly care less---so you say to yourself, guess I'll just dry off: That's motherhood, in my book.

And I sure loves it.

Happy Mother's Day, to all my 'commadres'!

P.S. Jim took Charlie out for one last evening walk. The wind was really howling and, in true father and son companionship, they wore their matching sweatshirts.

P.S. The photo of Charlie and Dad in matching sweatshirts made me smile. A lot.

Happy Mother's Day Kristina! Charlie is very, very lucky to have you.

(and count your blessings that you have a boy- I think that the girls stuff four changes of clothes into their backpacks every morning so that they have a fresh outfit every time the temperature changes 5 degrees!)

Thank you so much!

It's very cool and breezy here today so out came the matching sweatshirts........

4 changes of clothing---that would generate a lot more laundry!