Home Archives Profile Subscribe
Supercalifragilisticexpialidocious
Quite Sociable, If I Don't Say So Myself 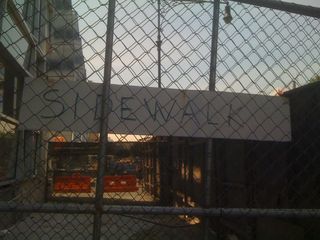 The topic of this post is a potential real shocker:

Jim and I went on a date.

Seriously. It's been quite awhile since we've done so. As Charlie has gotten older and especially as he's had an upsurge in 'challenging behaviors' in the past two years since he entered puberty at the age of (sigh) 11, it's been increasingly difficult, as in pretty nigh impossible, to have someone else watch him. We've been given names and talked to people and a college student friend of ours watched and 'hung out' with Charlie last summer (while  we were around). But after some really difficult (some would say catastrophic) experiences that involved going to the ER or 'first responders' well, responding, we've felt that it just wasn't the time to try a sitter.

My parents have watched Charlie---even stayed overnight with him for a day or two---since he was a baby, but with him getting older and bigger and my parents getting (don't we all), um, more advanced in years (they're probably going to email me about saying that, a-hem), having them stay with Charlie 'on their own' has become more complicated. Jim and I have gone to a local (as in five minutes from our house) restaurant a few times while my parents watched Charlie, but the days when we had them pick Charlie up from school and watch him till we got back late a night from a date in New York are, for the time being, a memory.

The lack of a sitter situation is something to work on. Yes, we have thought of asking college students from where we work; most of Charlie's previous sitters were all college students, with a few in high school. Or of having someone around while my parents are watching Charlie, 'just in case.' Yes, it would be good for Charlie to have someone else watching him, walking with him. The past two years have been rife with said 'difficult behavior problems'---much more difficult than anything we all had to deal with when Charlie was much younger---and Jim and I have preferred to choose to be on 'the safe side.'

We've also put the principle of 'if the mountain won't come to Muhammad, Muhammad must go to the mountain' into practice.

As in, go on a date while Charlie's at a place where he's happy, his needs and communication are understood, and he's secure: school. And that's just what we did on Friday.

After we dropped Charlie off, we drove into Jersey City, parked the car at my college, and walked down JFK Boulevard to take the PATH train to Christopher Street. We walked over to Chelsea and Jim gave me a personal 'Irish waterfront' tour.

We passed the Port Authority building, whose first floor now houses a Banana Republic store. (Some sort of irony in there.) 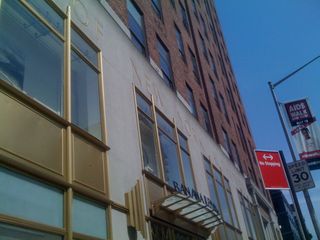 We checked out the Romanesque architecture of Guardian Angels Church, built with the, um, support of one 'Mr. Big.' 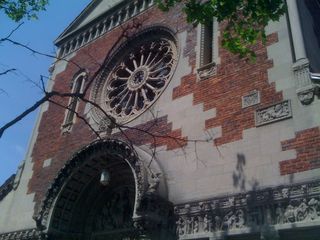 We walked on some of the piers, including Pier 54 which is still being 'developed.' 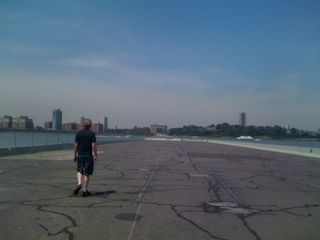 Jim and I both agree that, in its current unadorned state, Pier 54 would be most pleasing to Charlie. He's not a museum kid, but would appreciate the wide open space beside the Hudson River.

I think Charlie would also appreciate this park. 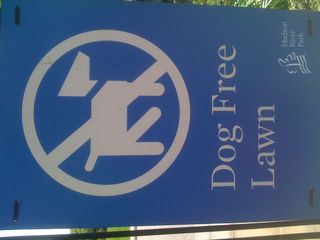 (Yes, I am working on getting the photo turned 90 degrees and upright.)

What's a date without a bite to eat---lunch at an oddly shaped table at (I think this was the restaurant's name) the Bus Stop Café in Greenwich Village? 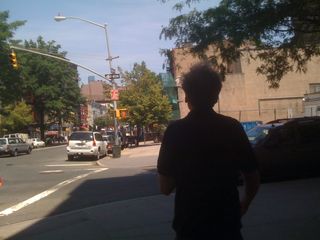 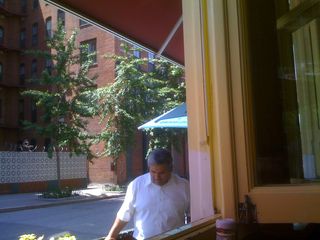 We took the PATH back and were just in time to pick up Charlie. The rest of Friday unfolded with 'the usual'---a walk, a long bike ride---though it was certainly good to 'shake up the routine.'

Not that a certain someone wasn't on our minds as we walked around. 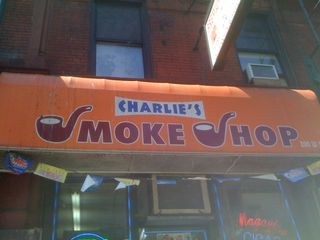 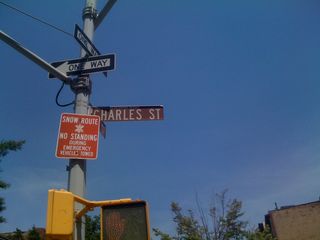 Yes, there is extra stress in raising a child with 'extra needs,' as a researcher, Brian Freeman of Kennedy Krieger's Center for Autism and Related Disorders noted in US News & World Report, in regard to a paper he presented at IMFAR 2010 dispelling the belief that there is a higher than average divorce rate among parents of autistic children as an 'urban myth.' And there are ways of alleviating that stress for parents by, yes, taking time for themselves to be together. A date at whatever time is great with me.

And yes, a certain song kept playing in my head all day long as we walked the sidewalks of New York.

Absolutely thrilled for you both. A few clicks past thrilled, really.

Good for you, figuring out how to fit in that date!

Autism Vox was where I first read that the 80%-divorce-rate figure couldn't be traced to solid work. Thought of you and that post when I heard about Freeman's study.

Wonderful, sounds like a terrific time was had by all :)

Great news...hopefully you'll be able to do that more often next year with your lighter teaching schedule :-)

Too often we forget to take care of ourselves as couples...good for you for figuring out another way to nurture yourselves.

Next time you go on a date on a Fri-day, you could make it a rendezvous at home - just the two of you, some finger food, and a bottle of Three-Buck Chuck. Just be sure to set the alarm!

We have to sneak in the romance where we can.