Home Archives Profile Subscribe
A Good News Post (or, we sure live near a lot of grocery stores)
Much To Talk About: Date #2 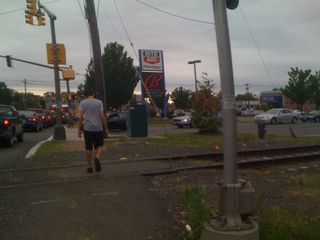 Charlie has been saying this phrase over and over, of late. He often punctuates his statement (said spontaneously by him) by stopping short if he's walking and, too, by holding his arms stiffly and, sometimes, pointing.

I don't quite know what it all means. I do think that Charlie is saying this phrase---all people from his past and present----because those people (or rather, beings---Lou is a dachsund) mean something to him. Meaning that, Charlie remembers them especially well, because (perhaps) we knew them at a particularly important, significant time of his life---namely, when we were living in St. Paul, Minnesota, where Charlie was diagnosed with autism and where he began first to learn and to communicate in a home ABA program.

I could be dead wrong and I'm ok if that's the case. It may be that Charlie just likes to say those names and the 'yes' over and over. Charlie really liked (I'd even venture to say 'loved') the therapists and general set-up of his first in-home ABA program: Maybe he's talking about people who he knew 'back then' as a way of referencing a part of his life when things were good, because things have been pretty good of late, school- and home-wise. A couple of months ago when he was still adjusting to his new school, Charlie kept saying 'hi Mr. Matt' and then 'Kathy Marilyn Flo': These were all the names of teachers and aides he'd had in the past and while he'd like them, those were classrooms in public school autism programs where things were more up and down.

Since the words that Charlie produces on his own often seem 'out of context' (it's very rare that Jim and I will be talking about the Twin Cities these days---we've many a fond memory from our two years there) and are mostly strings of nouns and words like 'yes' or 'no,' there's a tendency to see such phrases as 'non-contextual' (a term used by the teachers in the public school autism program he attended before his current school); as random and arbitrary; as meaningless. Jim and I being quite aware at this point of Charlie's major challenges with speech and communication, we've long known that we need to presume competence in Charlie and act as if he's saying something because it is meaningful to him, if we'd only try to see things from Charlie's perspective.

I've noted that Charlie, once a regular walker on the actual sidewalks of New York, has been showing a clear (and quite contented) preference for staying in the mundane old Jersey 'burbs. The long walk that we do takes us through two neighboring towns. While I'd say our own town has something of a 'pleasantville' ambience---lots of single-family homes with well-maintained front yards (not too big and not too little), kids walking or biking to school on their own, Italian grandmothers who are shorter than me standing at attention as traffic guards, the occasional front-yard lemonade stand (I kid you not)---some aspects of one neighboring town, while hardly any sort of urban jungle, are distinctly less, well, pleasant.

For instance, our long walk takes us (as depicted in the photo above) over (no longer used) railroad tracks, lots o' weeds, a sprawling parking lot bordering the tracks and the weeds, a couple of trash dumpsters, long lines of cars because there's a major intersection on the other side of the parking lot (and people try to cut across it all the time), a rusty looking set of buildings that produces something involving 'sealant,' a row of self-store warehouses, some big-box chain stores; quite a bit of trash (i.e. trash that's not in the dumpsters). And as we walk past all this (or sometimes, rather, sprint---Charlie likes to take advantage of the wide open space of the parking lot), I constantly say to myself, I can't believe I'm walking here for the nth time. Walking, and having a [no sarcasm] grand old time.

What would generally be thought a walk in ugly environs, is rendered, yes, meaningful and even fun, by doing it with Charlie; indeed, by doing it regularly, and repetitively---twice yesterday, in a cool breeze with me in the afternoon and post-rainy-bike-ride with Jim and in matching sweatshirts.

Just as, what might be thought an obsessively, excessively, repeated phrase becomes a trademark expression of something very Charlie, replete with meaning.

And it's a meaningful adventure we journey through with Charlie. Believe you me!@

I hate those labels that turn an attempt at communication into a problem. What if Charlie is trying to reminisce?

Sounds like reminiscence to me.
One of my former students used to say, very loudly at seemingly random times, "Lucky Leo!"
There was no one at the school named Leo and it would have seemed like a non sequitur if I hadn't known that he was referring to an arcade on the Seaside Heights boardwalk. He had been to Lucky Leo's on a class trip and I guess he enjoyed himself because he kept referring to it for months. For all I know, he's still exclaiming, "Lucky Leo!" I doubt anyone understands the reference now and they probably think he's just "vocalizing."

Oh yes I know exactly what you mean by repetitive phrases and walking every single day! For my child, I feel they just love the way the words sound, that it is a form of vocal stimming as simply put as I can, and walking well although the scenery never changes is always good for us!

We live closer to the shore then anything, walking the boardwalks, beaches, is more often where we spend our days, something that if isn't done, can cause some serious meltdowns.

It is good to see I'm not the only one walking everyday, following a strict routine, listening to the same word or same phrase over and over again :-)!