Much To Talk About: Date #2 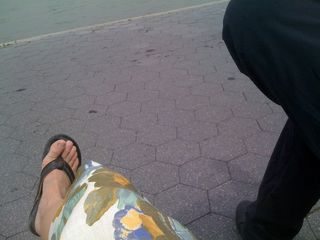 Charlie began the long weekend by getting up at 5.30am and going (with the usual parental partnering) on a long walk. On returning, he headed straight for the backseat of the white car, having secured a jien duy my parents had sent in a box that had arrived on Thursday.

(Not that you're wondering, but deep-fried rice flour puffs stuffed with red bean paste and encrusted in sesame seeds survive 2 day priority mail transit, especially when wrapped in layers of saran and sealed in a Ziploc.)

We were on the road the school by 8am, which means the driver (moi) didn't have to (as is the case 88%+ of the time, speaking purely anecdotally) proceed at a rather robust tempo. This also meant that we had to wait to hear the Bird Flight show with Phil Schaap. I know, I've mentioned him yet again---but Charlie does sit up straight and perkier and his face breaks out into gleeful lines when he hears Phil's voice. As Bird Flight doesn't start till 8.20am we listened to the program before it, Daybreak Express, which is usually all very well but Friday morning the music (mostly a cornet) was not (to us) of a familarly soothing sort. After we'd listened for five minutes, I saw Charlie's brown eyes looking bigger and his head bobbing as he forehead furrowed, as he were trying to follow the line, or lines, of the music and couldn't quite, at least after an early wake-up.

There was little traffic and the ride was smooth, and Charlie dozed in and out. I was worried that he might be difficult to rouse to get out of the car but he exited as soon as an aide (who is not in his classroom; he's now ok with any of the aides taking him there) opened the door. I was worried, too, that Charlie might be tired and want to sleep during the schoolday and be out of sorts in general, but his teacher wrote that he'd had a fine day.

This time, I met Jim at his office in New York, at Fordham University's Lincoln Center campus.

Then we walked down by the Hudson. 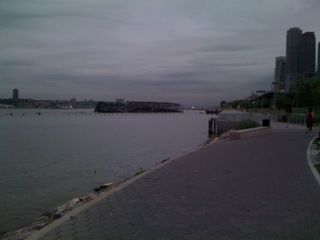 We sat on a bench and talked.

We had an early lunch at a Greek restaurant (my pick), where we talked more. 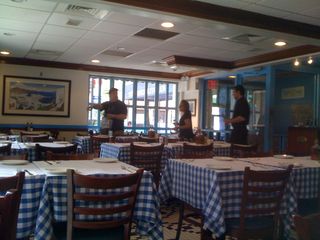 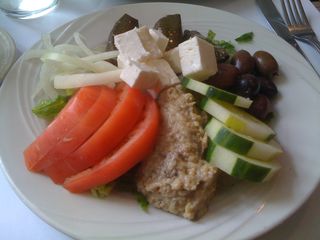 (I could have ordered a refill of my Greek coffee, indeed.) 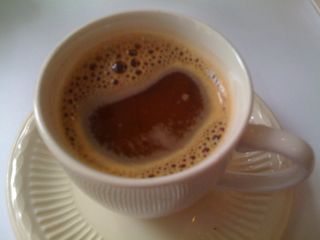 I went back via the D train and the PATH and had time to stop at home, and then pick up Charlie.

This date thing looks like it's going to be a Friday fixture, at least through the summer and when Charlie's in school and Extended School Year. I'll be teaching on Friday come the fall, but there are plenty of other weekdays in the week.

It's not that Jim and I don't talk plenty in general. But we try hard to avoid going on and on about upsetting and unpleasant topics in front of Charlie rather as I think parents generally do. Prior to the past year or two, I think we didn't filter the content and tone of our exchanges in front of Charlie. A spirited conversation about New Jersey politics or, I don't know, some book or other, can have nothing (directly) to do with Charlie  and still set him on edge. Charlie can sense excitement and passion and strong feelings whether expressed verbally or non-verbally; hence we've found it well to email or text each other at times. Maybe that sounds a bit extreme, but it's worth it at this point in our household to keep the peaceful-easy.

All the more reason why it's essential to keep up the dates.

I'm happy for you that you can have these dates with Jim! It's a good solution...Have a wonderful weekend!

I've been feeling very lucky---hope you have a great long weekend too!

I think Charlie listening to the radio is excellent! I found the radio to be an important aspect of driving our children to school, too. Promotes listening skills. They often asked me questions when the news came-on - giving us a topic for discussion. That opportunity is missed by children who ride the school bus.

My Hubby and me are like you two in taking advantage of talking away from our children and finding it important to our relationship.

My husband and I are fortunate that G does well one-on-one with an adult, his issues arise more with groups of peers. So we're able to get a sitter once a week to go to dinner and just talk. We've been doing this almost two years now, and it is such an important part of maintaining our healthy marriage now, I don't know what we'd do without it. During the recent economic downturn, we justified keeping it up as being about the same price as an hour of marriage counseling, but more fun. ;)