Home Archives Profile Subscribe
Iconic
A Good News Post (or, we sure live near a lot of grocery stores) 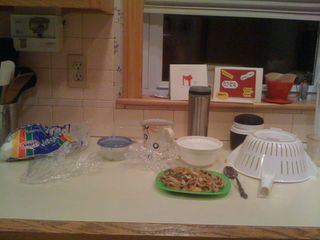 The new little routine here for the past few days has been:

Charlie has woken himself up between 7 and 7.30am, just enough time to wake up fully, get himself dressed (even showered!) and into the car. (In point of fact, yesterday he waited for us slowpoke parents to get ourselves and our things together.) Either Jim or me or sometimes (as was the case Tuesday) both of us drop him off at school. I usually pick him up.

And, for the past couple of days, after a (largish) after-school snack and a little computer time, Charlie's been heading up the stairs for a late-afternoon snooze from which I've been waking him after an hour, courtesy of the timer (we again have an iPod touch (refurbished......), thanks to my generous relatives) and the radio (streamed via the computer which seems on the verge of becoming the all-encompassing multimedia/entertainment/communication device around here). (Good thing we have more than one; broken TV resides in the basement.)

Monday Charlie must have been really worn out as he could barely get up by 7pm; Tuesday, he was awake by a quarter after 6pm. Both days--after riding his bike and doing his habitual walking tour of the neighborhood---he wanted to go to bed by 11pm and stayed in his room, even though it took him (on Monday) over an hour to fall asleep. Tuesday, the three of us enjoyed a night walk after which Charlie helped himself to a late supper/'snack' of noodles, and was careful to configure the dishes, saran wrap, and other items on the kitchen counter with his inimitable sense of order. (My no--spill coffee thermos---glowering over some lunch containers and before the birthday card my sister made for Charlie---is actually at the center of the arrangement.)

What's notable to me lately is how flexible, how accommodating (who's accommodating whom, I sometimes wonder), Charlie has been to step outside of his 'this order must be maintained' mode and to do as requested, whether waiting in the car until we're all ready to go, or to going to his room and hanging out there even if he can't sleep (and sleeping eventually), or not taking too much stuff in the car.

Charlie has always liked to bring a few of his own treasures---his worry beads, the garage door opener to his grandparents' house (it doesn't work anymore and there are other openers)---and to leave them in the back seat. In the past, he has wanted to bring so many things with him---a couple of blankets, in particular---that the back seat was in danger of being transformed into an alternate living space. Too, the more Charlie took into the car, the more he had still to snatch up from his bedroom or the old blue couch and place in the back seat, and the more adamant he became about traveling with a steamer trunk's worth of stuff. So we have been limiting what he brings to the smaller items (yes, a couple strands of worry beads) and negotiating: One small blanket is ok but not three king-sized fleeced ones.

Even though I was rushing around making coffee, putting the finishing touches on Charlie's lunch, and getting dressed, the negotiating on Tuesday morning went without incident, with Charlie dumping the bigger blankets on the living rom floor and (with a pleased grin that seemed to say got one past you, Mom) making haste to secrete the lone little blue blanket, all wadded up, into the car.

I also got the sense that he was indeed pleased that he could take that one item but not the whole kit and kaboodle; that he was able to let go of fulfilling the 'stuff in the car' obsession.

Also, on the ride up, Charlie has started to look forward to hear Phil Schaap on WKCR, working his way through all the recordings of Charlie Parker on his Bird Flight show. It's even gotten to the point that somedays telling Charlie he'll get to hear Phil in the car has been enough to get Charlie out of bed, and that Charlie has been calling for 'Phil, Phil, Phil, Phil." Unfortunately, so far this week, Phil has been absent and while there's no denying how good Charlie Parker sounds, it's not the same hearing multiple takes of the same number without Phil's commentary. I rather think, too, that Charlie just likes to follow the rhythms of Phil's voice.

Charlie has been ok with 'Phil-less' rides, though calling over and over for him, and doing a nice job on the initial /f/ and final /l/. (One way to practice articulation of difficult initial and final consonants, I guess.)

And I'm feeling like our strategy of not using CDs (= highly likely objects of self-stimulatory OCD fixation) and relying on the 'we can't control it' rhythms of the radio, is working out well.

(Though I have to admit, Charlie's not the only one missing Phil to start his day.)

Less stuff in the car is also less stuff that Charlie has to keep track of, maybe that's a relief for him?

It's wonderful that you allow us see Charlie growing up. And growing up is not a big enough phrase, he is growing in all directions in so many ways. Being accommodating is no small progress.

Had some 'blanket dealings' before going to school this morning but we were able to meet a fair compromise.

I do think it is a relief for him to have fewer items to keep track of though that doesn't occur to him when he is piling things in the car!

Those noodles look good! What is your recipe? And which brand of cook-in-the-bowl noodles do you use? We have a number of noodle devotees in this house, too.

Charlie has been rejecting all of my cooking lately...... it's take-out!