Home Archives Profile Subscribe
The Ides of May
Soloist and Accompanists

Shared Memories Are Sweet, But Those Brand New Are Sweeter Until I neared adolescence, my parents celebrated my sister's and my birthdays with parties in which all my relatives from both sides of the family came over. Everyone brought a dish, though my mom always spent hours preparing casseroles or teriyaki drumsticks and wings, egg rolls or fried won ton (we helped fold these---I was very proud to be helping out). Sometimes she made wonderful cakes, chocolate with white icing (my sister's favorite), a carrot cake from a special recipe Aunt Nancy, egg cake (a not very sweet sponge cake that my older relatives preferred), a special cat cake that I had seen in the Betty Crocker cookbook and that my mom baked in several cake pans, assembled, and frosted, and made the gumdrop eyes for. She usually made her own cakes even when she got us a store-bought one from Safeway; I vividly remember the Cinderella cake--complete with a plastic transformed-from-a-pumpkin carriage with horses, Cinderella, her Fairy Godmother, and Prince Charming---for my sister but can't recall any of the ones I chose as well as that cat cake.

They were great birthday parties. I was excited to have everyone from both sides of my family over, and kept running into the living room to survey the growing pile of presents. I had to wait till after everyone had eaten and I'd blown out the candles on the cake to open them. I always saved the one I most wanted to open last (when I was little, the biggest; as I grew older, the one that had the special something about it).

And birthday goodness didn't end when the last guests---often my Great Uncle Walt and Great Aunt Mardé---left, sometimes when I was already dozing off in bed, to the sound of the vacuum cleaner and the dishwasher. For the next few days, we'd often have a special treat of birthday cake (and fresh fruit---Mom always had nutrition in mind) for breakfast and, in our brown paper bag lunches, packets of drumsticks or wings, egg rolls or won ton.

So I did feel a happy nostalgia as, on Sunday morning, the 'day after' Charlie's 13th birthday party, I dug into a piece of birthday cake as we drove down the Garden State Parkway en route to (as promised to Charlie the day before) the beach. Charlie had taken a few spoonfuls of frosting but otherwise was not interested in the cake, preferring to spirit a box of crackers and a liter of Sprite into the back seat of the white car.

(He had the most pleased grin on as he made off with the Sprite from the fridge, as if he were quite aware that he wasn't supposed to have that much soda and certainly not in the back of the car; whatever on a birthday boy weekend, right?)

Getting to repeat my own childhood experiences as Charlie's parent: It's been rare that this has happened, with so much about Charlie and Charlie's childhood being utterly different from mine: For one thing, 'voracious' could hardly begin to describe my (and Jim's) reading habits, in stark contrast to Charlie's adamant disinterest in books and reading. Is so often not being able to replay, to re-experience, one's own fondest childhood moments a reason that having a child with a disability may seem so (if I may say so) tragic to some?

It is the case that so many of the highlights of my younger life---writing stories and poems, learning Latin and ancient Greek, all-night conversations with friends in college and grad school, graduation from college and grad school---are not, will not, be part of Charlie's. When he was first diagnosed, and for some years after, I know I felt an irreparable sense of loss, to think that Charlie would not, would never, get to experience some of the things that I most valued. Over time it's become apparent to me that it was presumptuous of me to think that Charlie might want to do just what I had (learn Homeric Greek and Classical Chinese........) and, too, that maybe there are other experiences that I, contently cooped up in the library for so many years, had missed out on.

Like New Jersey traffic on the Garden State Parkway.

Sunday was a gorgeous day so it was no surprise that lots of people, in lots of cars and SUVs, were going to the beach. Fortunately Jim has extensive Local Knowledge of the roads in New Jersey so we were able to keep (more or less) moving on various roads. We got to the beach by noon and had a very fine walk as far as we could go on a beach on an inlet. 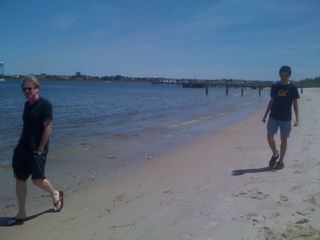 Charlie led the way, over sea brush and sea weed. 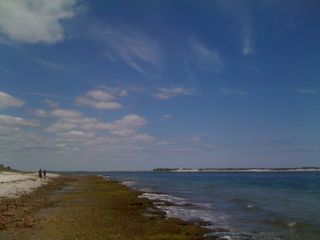 Past a very large horseshoe crab. 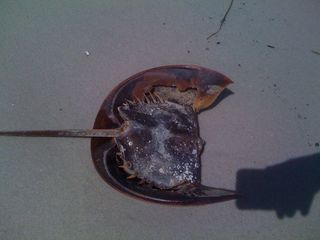 I lagged behind Jim and Charlie and added to my collection of shells and sea snail shells. 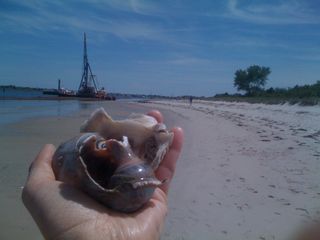 Over time I've learned that there are plenty of other ways of doing and being, and that the ways Charlie has shown us may well be things we would never have thought of doing, or could have ever imagined. And how we would have hated to have missed out on them.

Especially these past thirteen years together.

Well I was fine through the birthday preparations and the big day but THIS post made me cry; you had me from "he spirited Sprite and crackers"...this will be the best year ever. Well done Mom and Dad!

Congratulations and best (belated) birthday wishes to Charlie as he enters his teens, and to his devoted parents!

As we prepare to celebrate Joy's 6th birthday over here, it's so encouraging to read about ongoing progress and growth and celebration from those further along on their autism journey. There's obviously no magic developmental window that slams shut at the age of 5...

Continuing possibility for growth and change -- that's rather the opposite of the Grecian Urn, no? ;-)

>> Is so often not being able to replay, to re-experience, one's own fondest childhood moments a reason that having a child with a disability may seem so (if I may say so) tragic to some?

Expectations have a nasty habit of distracting us from happiness that is passing right under our noses. *shrug* With or without an autistic person in your life. Learning to question your assumptions about how things should be, in spite of how things have been, is an important life skill.

@JoyMama,
yes, it is the opposite of the Grecian Urn with a nod to the dangers of Romanticism....you're giving me the ideas for another post.....

@Dwight,
I plan to continue to question assumptions, authority, and much else!

>> @Dwight,
>> I plan to continue to question assumptions, authority, and much else!

I'm currently in the middle of a mini "re-education campaign" at G's school to help them do that, too. It has been tough slogging with the principal but I've had a number of other successes, and allies, among the staff and school district that have been yielding some concrete results for G, with even more promise for the Fall as things come into place.