Monday was a holiday here in the US, Memorial Day. Charlie's internal clock knew only that it was Monday, so he was ready to go to school. His teacher had sent home a social story and I quickly read it to him as he asked to go into the white car. We instead went on a morning walk which was as well, because the temperature was already climbing into the 80s and the sun shone down strong.

I had brought a bottle of water and when I showed it to Charlie about 2/3 into the walk (i.e., after 3 miles), he quickly took it and drank. Just as we neared home (about 2 miles later), he asked for 'water' and finished the bottle---all very good, as he's more likely not to ask for water on our walks, regardless of how hot and thirsty he might be, simply because he has not been used to doing so, when the weather was cooler.

It was not even 8am when we got back from the walk. Charlie breakfasted (sushi---untraditional, but gets in a few food groups, right?) and, once I got my coffee made, we drove off to Jersey City to visit Liberty State Park, complete with glorious (clear sky + hot sun) views of the Manhattan skyline, Ellis Island, and 'Lady Liberty' herself. 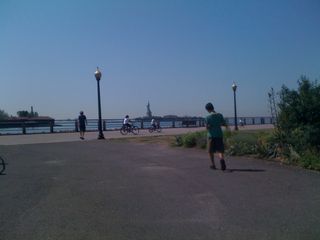 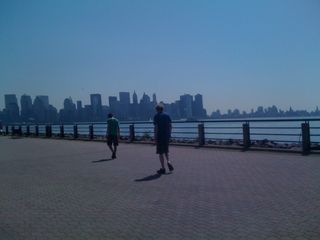 (Or, at least the back of her, as that's the part that she shows to New Jersey.)

Charlie walked, or rather ran, ahead of Jim and me, often by quite a bit---something he would not have been able to do a year or even a few months ago.

He said 'diner, diner' as we passed in the vicinity of this eating establishment. With recent past experiences in mind we u-hmm'd and u-humm'd as we drove and ended up at a McDonald's. Charlie happily reached for his two plain hamburgers but, as I discovered at home when he and Jim were out riding bikes, this McDonald's had taken 'plain hamburger' quite literally and not put ketchup or pickles on the burgers and Charlie had left them untouched.

So you may imagine where he asked to go when he and Jim got back. This time, after a visit to our 'home McDonalds,' the burgers were properly condimented (and Jim had a ready-made burger lunch).

It continued as hot as ever and we drive Charlie by our town pool. Once (summers of 2004 and 2005) he and I must have been there almost every weekday afternoon; so many memories (some involving 10 minute stands on the diving board and thrown French fries) just turning into the parking lot. Charlie had said 'no, no' as we drove in the direction of the pool and then a big 'no' as we approached the entrance. Jim and I had agreed we'd go with whatever he wished regarding the pool, so we turned back home.

And then we were drawn, inexorably, to go back to the ocean, no doubt still under the thrall of Sunday's solo performance in the waves by Charlie.

He staged a total repeat, boogie-boarding and then swimming for a long time in the waves, on the beach near the beach house we'd rented for the past five years. The water was 55 degrees and Charlie stayed in till Jim waved a beach towel at him. 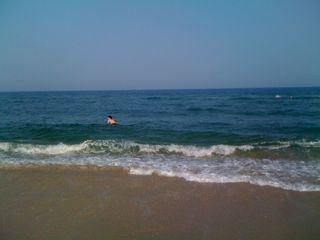 There was an accident or road work so it took us at least a half-hour to leave the beach. Traffic bumped along at 5, 10, or zero miles an hour on the Garden State Parkway for much of the way home. Charlie sat most patiently, even through me singing snatches of verses from this and that Disney song, to pass the time. He fell asleep when we had about a half-hour more to go and then was wide awake once home, and then---after getting up and fully dressed and wanting to use the computer at 11.3pm---was very amenable about returning to his room to rest in preparation for school on Monday. At first we could hear him chattering him away, and then after some 20 minutes, he was once again in slumberland.

I don't need to say it but, yes, it was a memorable Memorial Day, a second act to Sunday's bravura solo swimming. 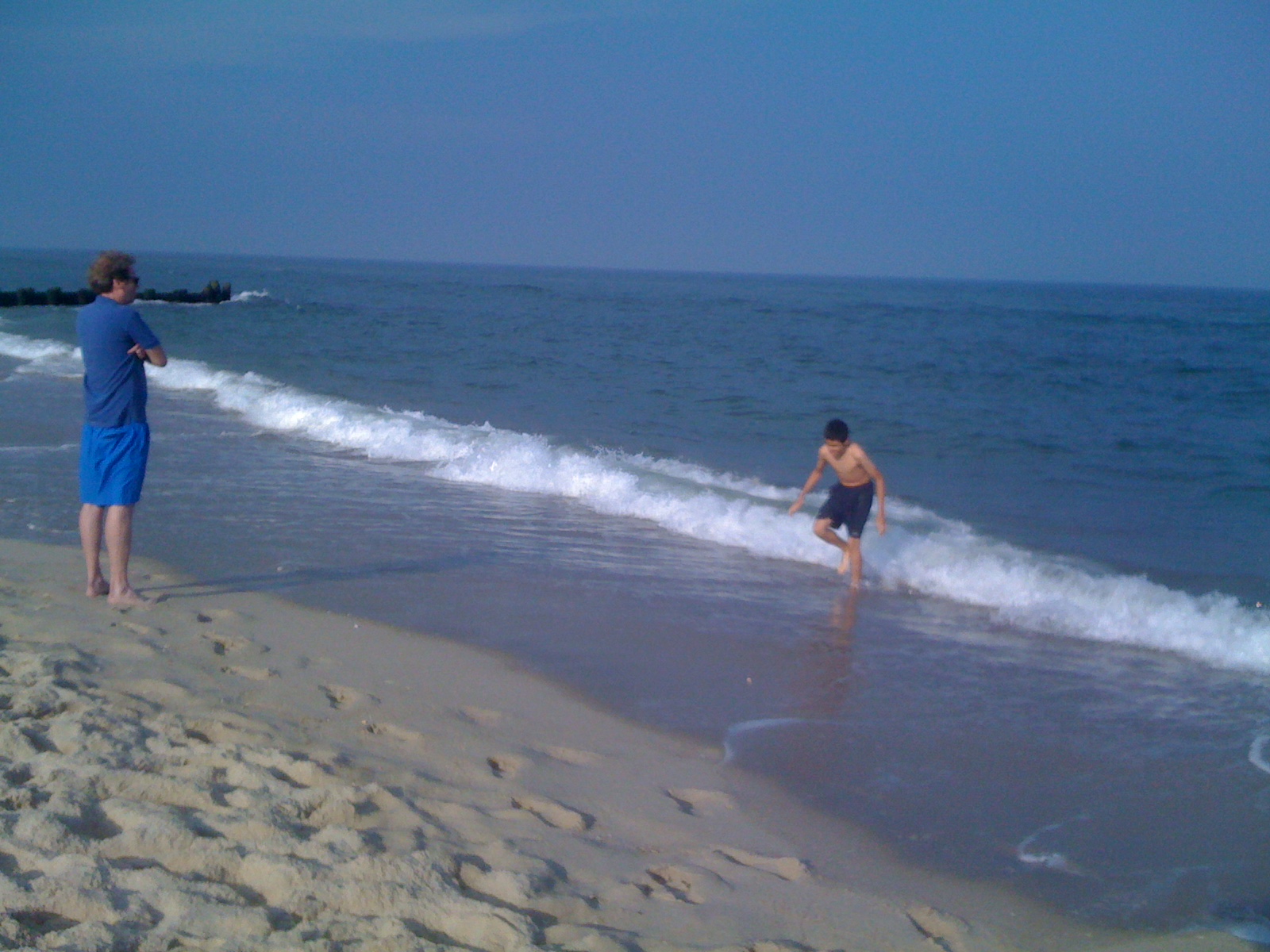 What an awesome day!

When you think about past summers (or just the past) do you marvel at days when communicates consistently and has no meltdowns?

My boys, ages 19 and 21, were on Long Beach Island visiting friends for the holiday weekend. Like Charlie, they both went swimming even though the water was cold. It must be a guy thing.

And Charlie will not wear a rashguard--he would have stayed in far longer than he even did!

@Barbara, we totally marvel and in particular about handling an over 3 hour ride home in mostly non-moving traffic---and asking for the water was huge!