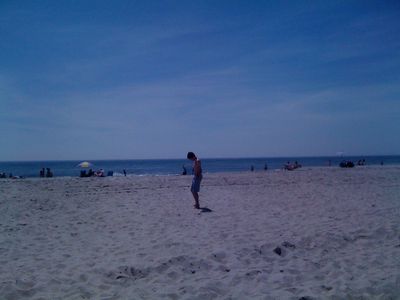 In the summer of 2001, we were walking on the beach when we met a man and a boy boogie-boarding in the waves. Charlie was four years old and absolutely fascinated by the ocean, which he clamored to be brought to in our arms or (preferably) on Jim's back. If not in the water, Charlie would stand on the wet sand enthralled by the waves going back and forth, back and forth; sometimes he'd run in and out of them and, too, from side to side.

Each time we were at the beach, Jim would drag out the boogie board and (sometimes with me holding it) get Charlie to lie on it. After a bit of wave action and, sometimes, or rather most of the time, Charlie flopping off the board (he'd just lie flat on it; we had to place his hands on the edges to hold on, and then his hands would slip off due to the board being, of course, wet), Jim would pitch the board to me and I'd haul it in, while he and Charlie ventured a little farther out into the waves.

The boy we saw boogie-boarding was wearing a rashguard and a big smile as (with his board properly fastened by its strap round his wrist) he rode a wave in; as he got up from the sand and, still smiling big, ran back to catch another wave.

It was early evening, the lifeguards long gone (they stay till 5pm) and the air cool. Jim and I asked how old the boy in the water was. "Six," replied his father. He was wearing a shiny black rashguard and must---as evidenced by his slicked-down hair and mustache---have just been swimming himself. He and Jim kept talking, and we learned that the man was a New York City firefighter.

"It all starts at five," he assured us. And smiled warmly towards Charlie.

We returned to watching his son---I think his name was Kevin---riding another wave in.

Sunday Jim and I stood on the sand and watched Charlie riding a couple of waves in.

We were at the same place on the Jersey shore where we'd met the fireman and his son, though not at the exact same part of the beach. It was late morning as Charlie, after a 6.30am walk, had put on his swimsuit, loaded his boogie board into the white car's trunk, and asked to go to the ocean.

Charlie refuses (quite logically) to wear anything but his swimsuit to swim and was only in the 50 degree water for several minutes. During that time, he jumped onto his board, swung with a wave for a moment, and started kicking. He went out and out and Jim called his name and I made the 'rein in it' gesture with my left hand; Charlie swum back around and got his first ride. He turned right back around towards the ocean (Jim could tell he was able to stand in the water) and got back on his board and a wave brought him in.

Charlie got dunked under by the swirling waves on the last ride and ran out, asked Jim to unfasten the wrist strap, and ran back into the ocean. Aside from a girl around his age who scurried in and out at the very edge of the waves a-shiver, Charlie was the only swimmer.

Charlie was the sole swimmer, and he was swimming, and boogie-boarding, solo.  Jim and I were two parents watching their son swimming in the ocean.

You can see for yourself. 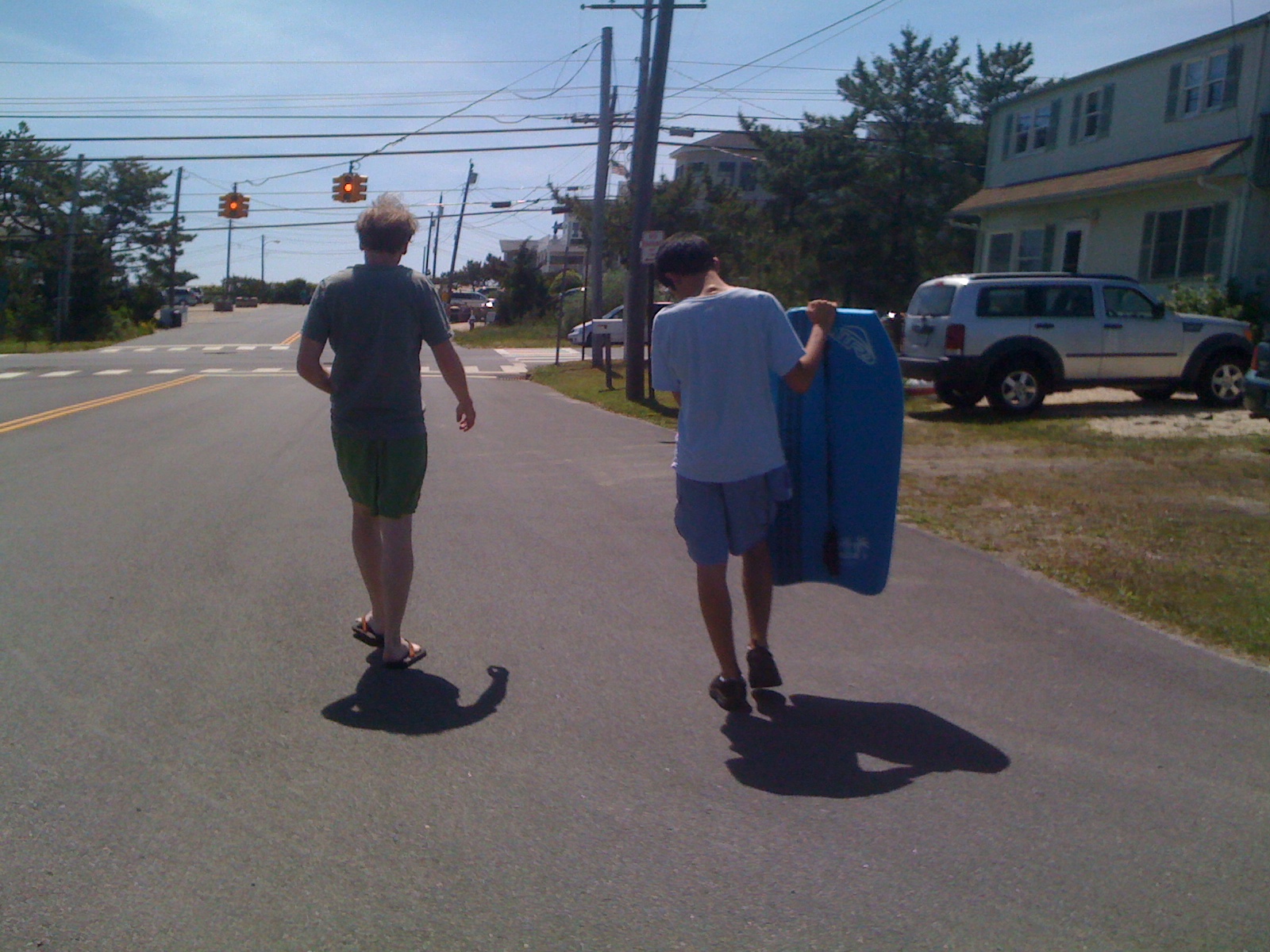 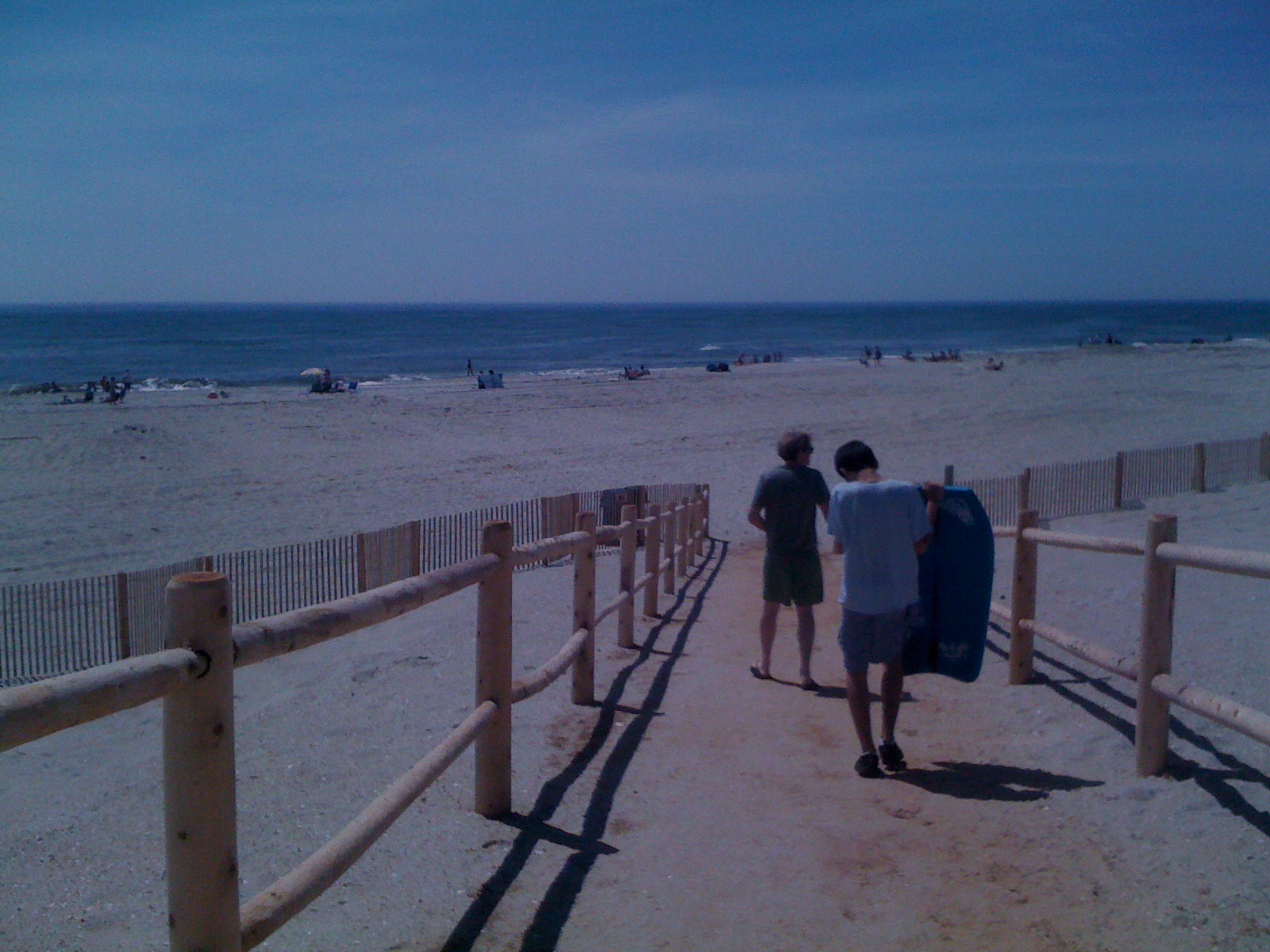 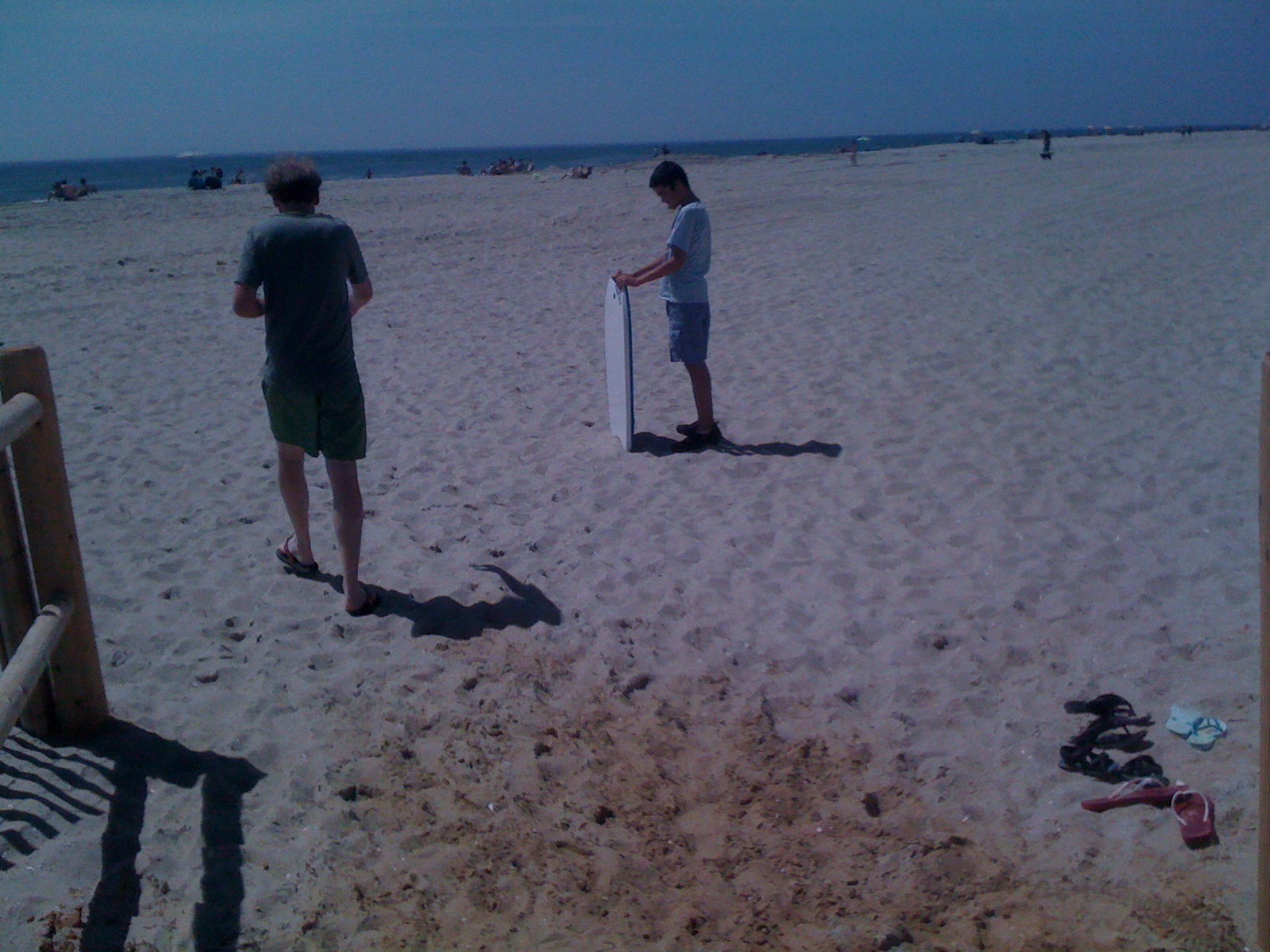 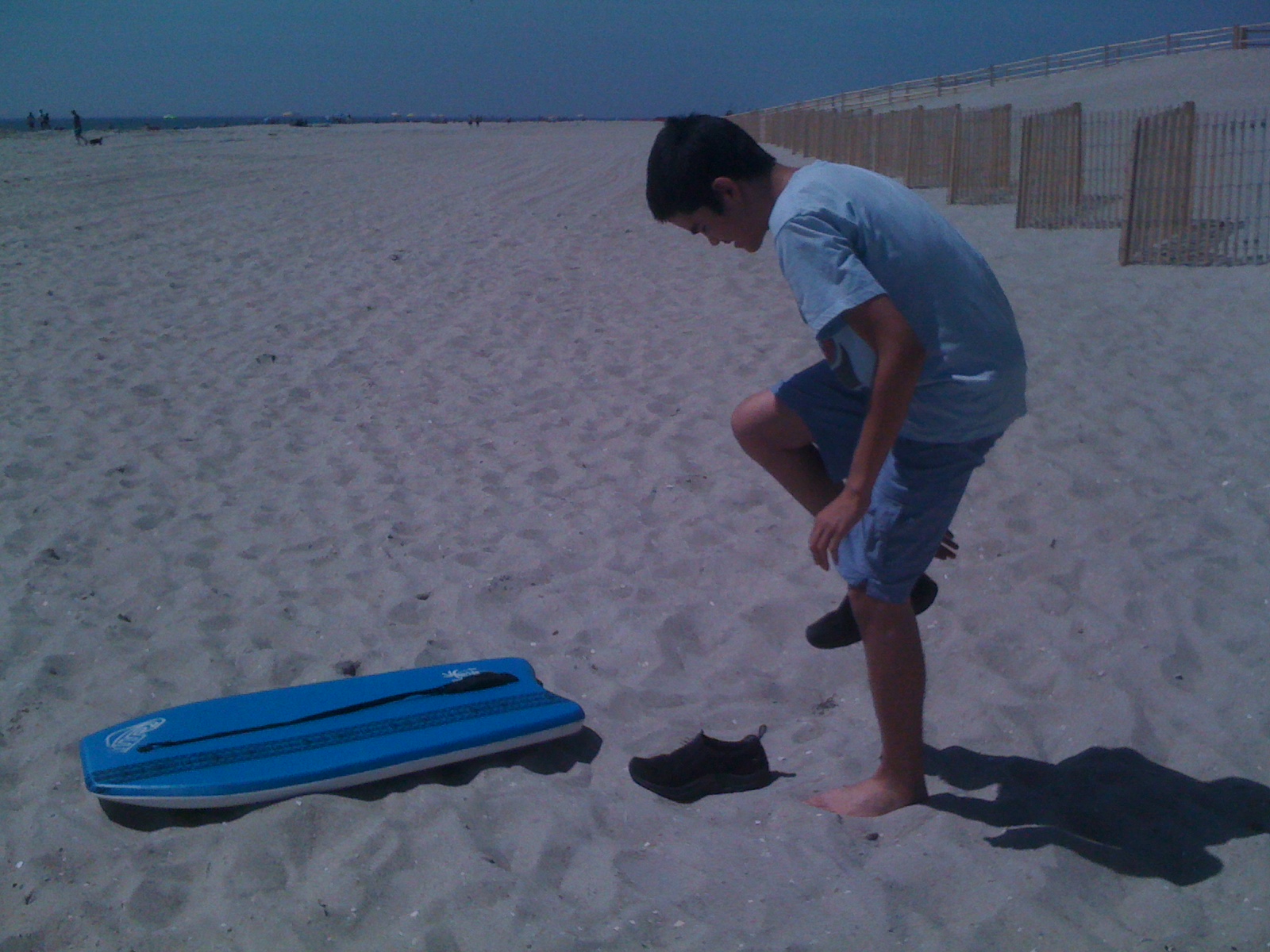 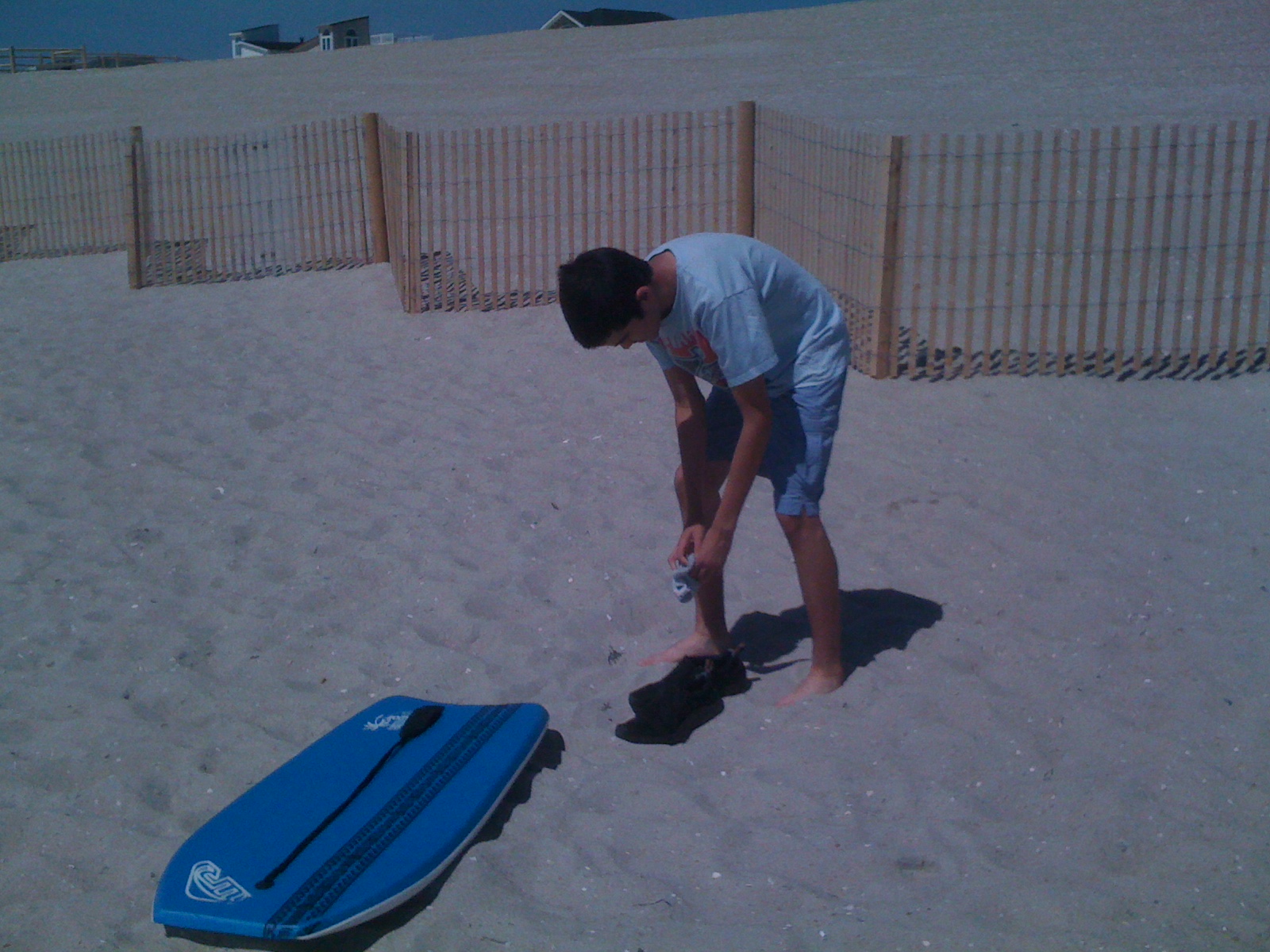 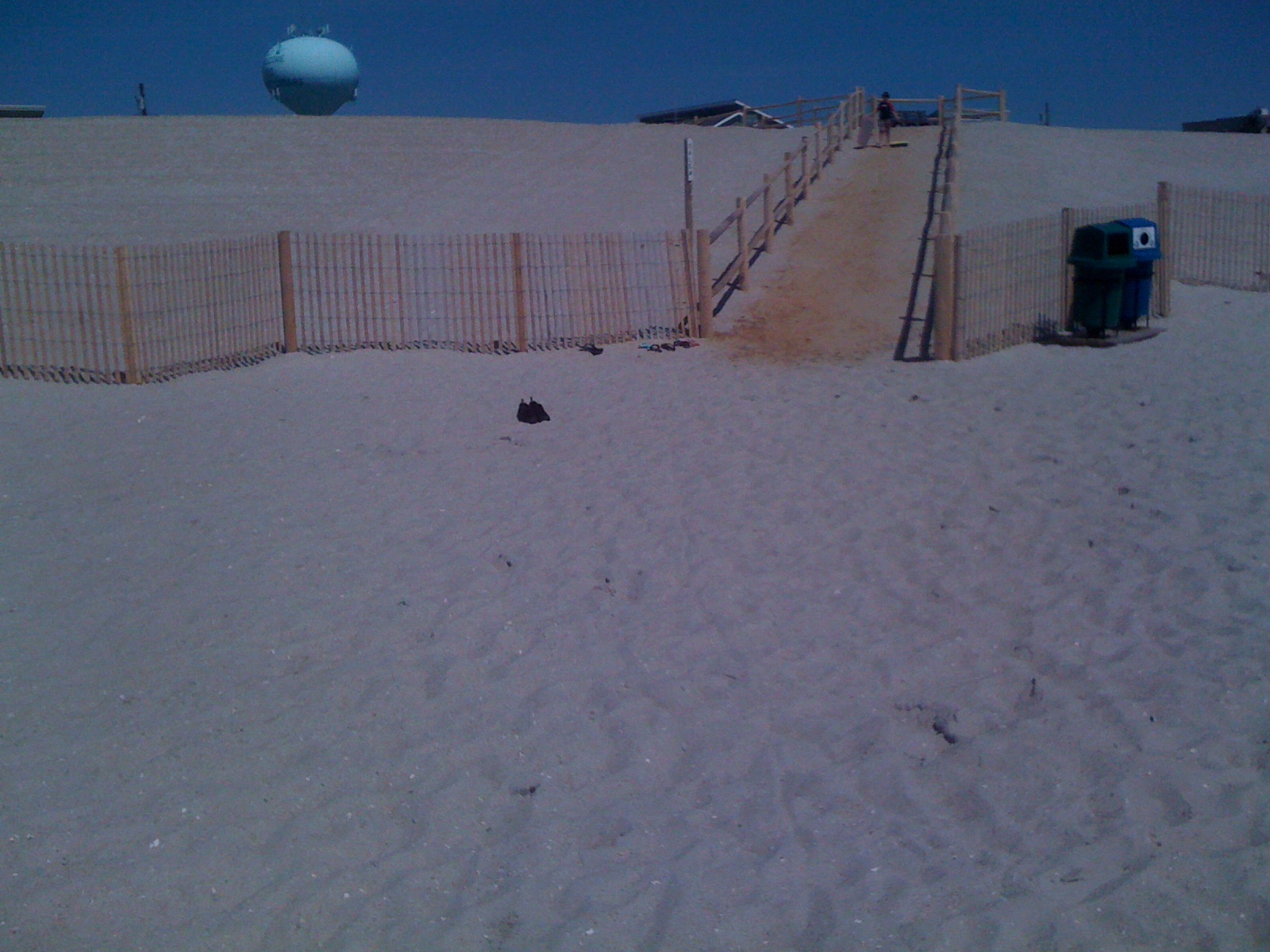 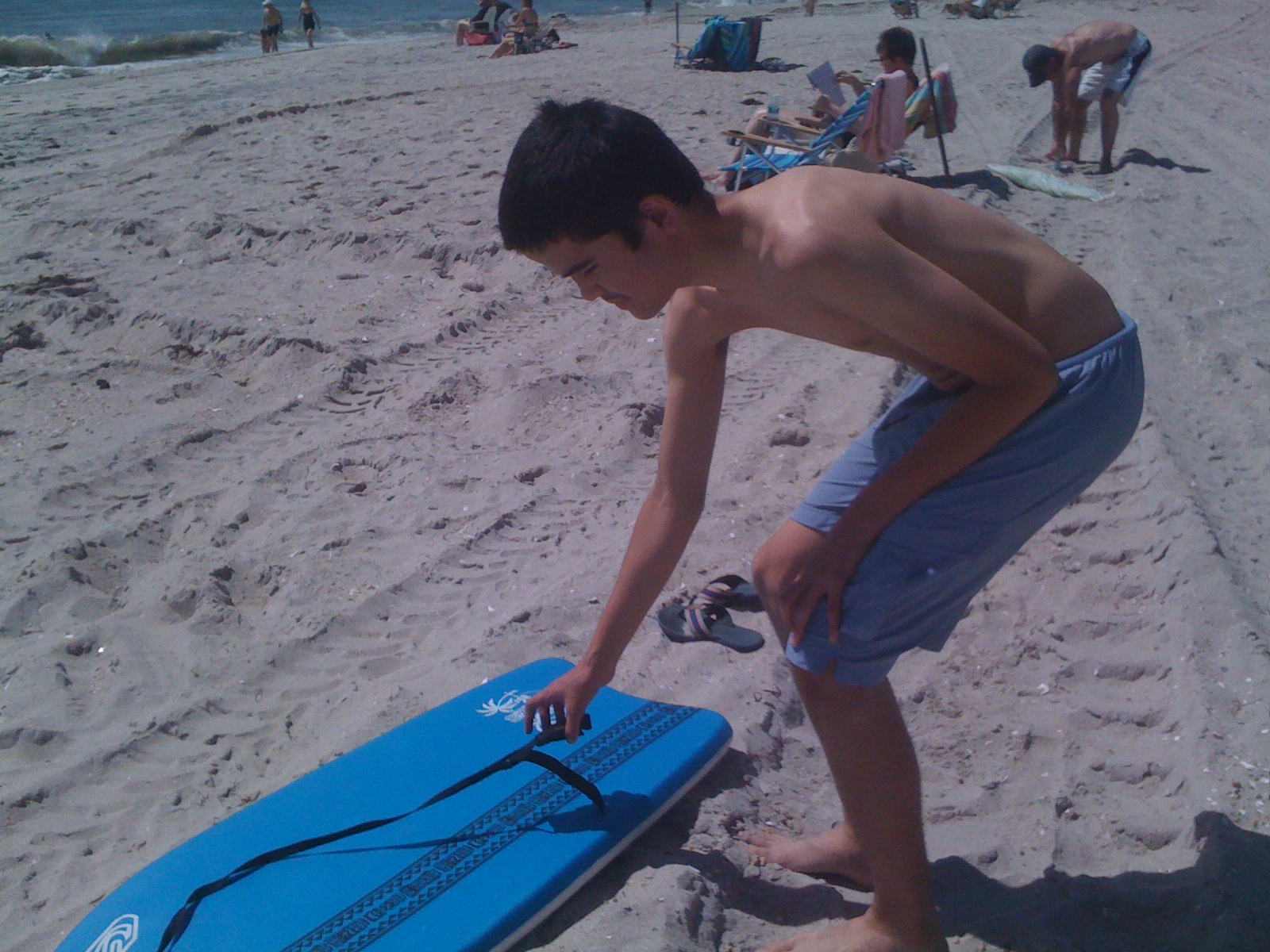 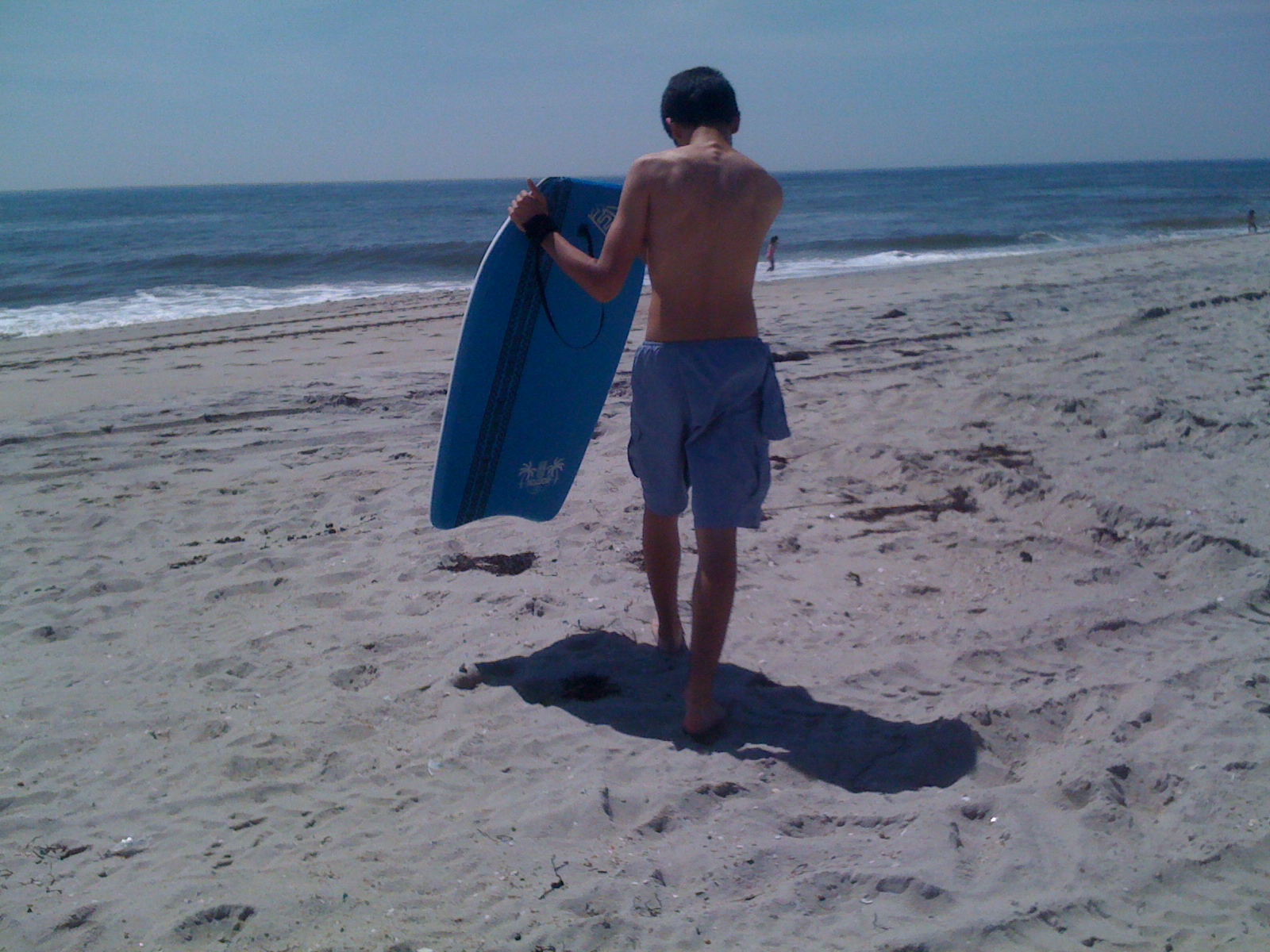 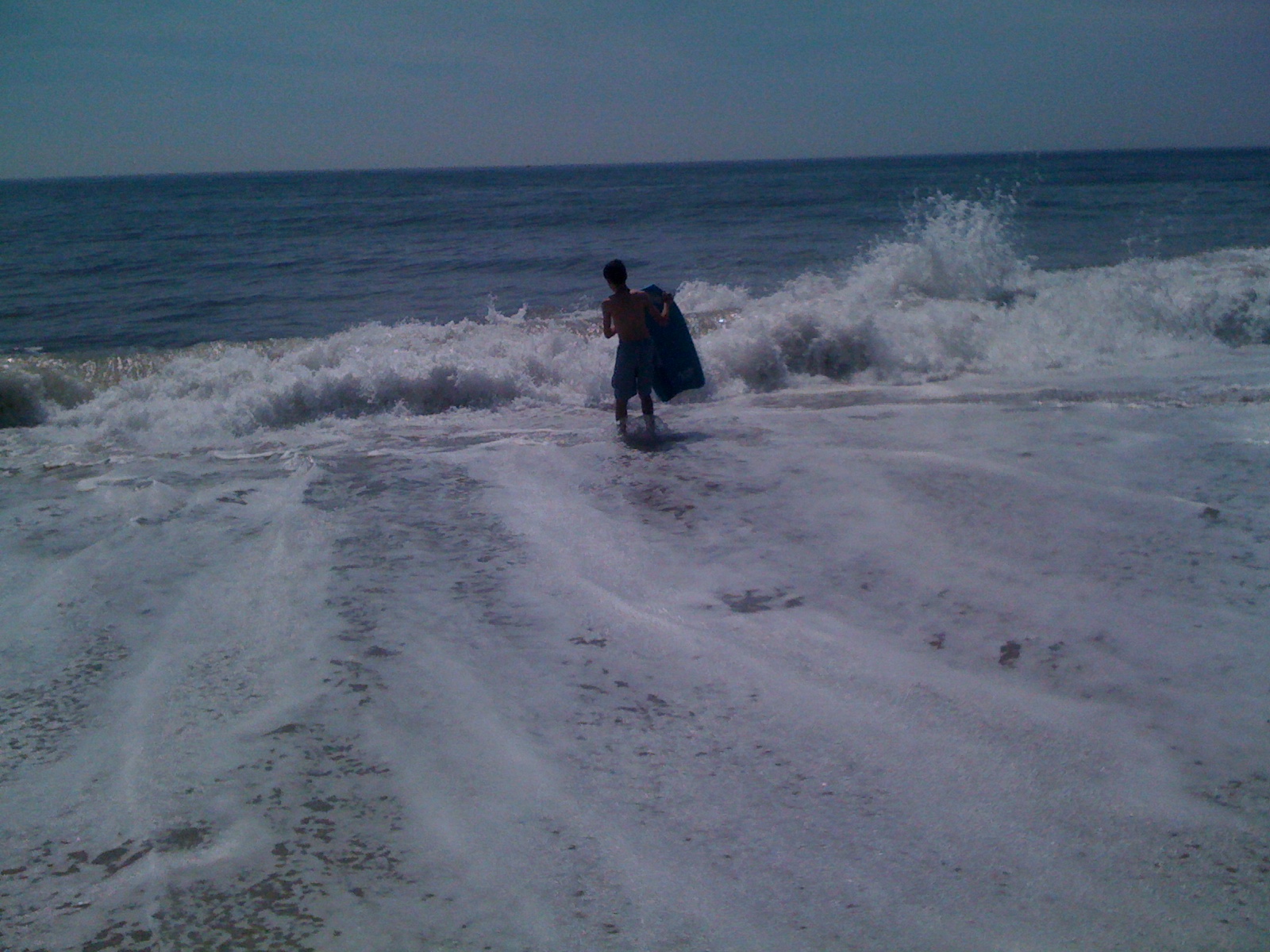 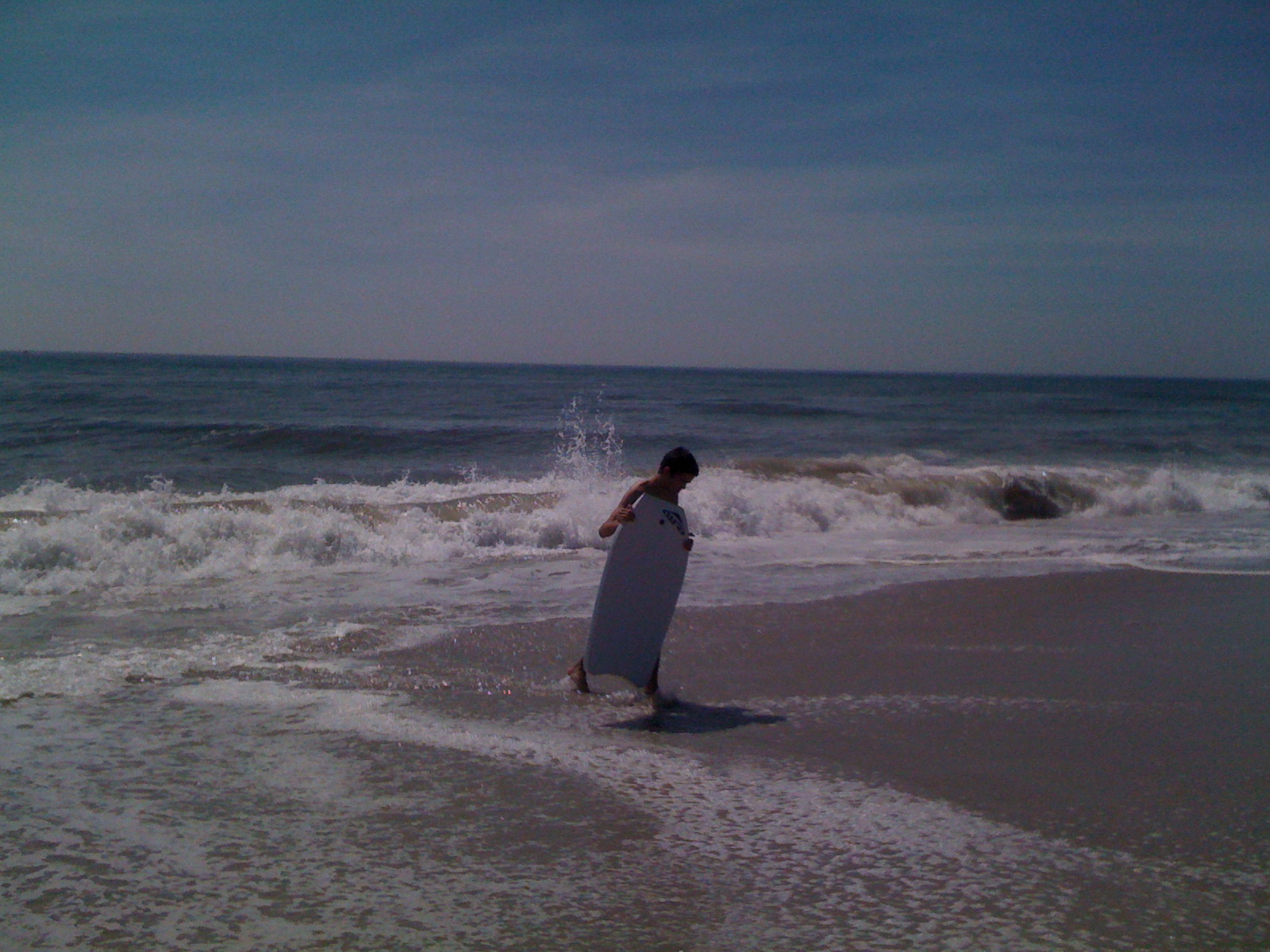 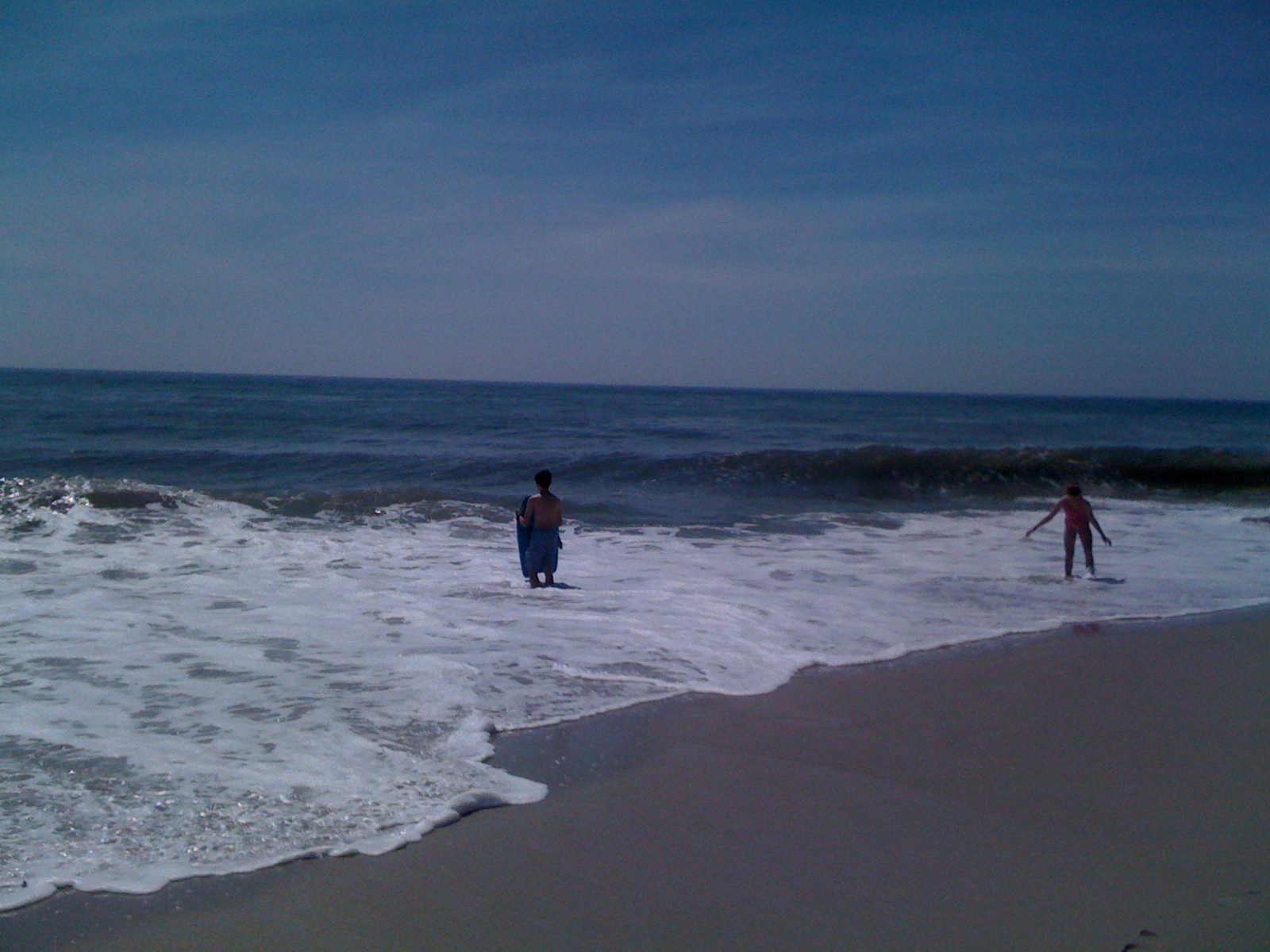 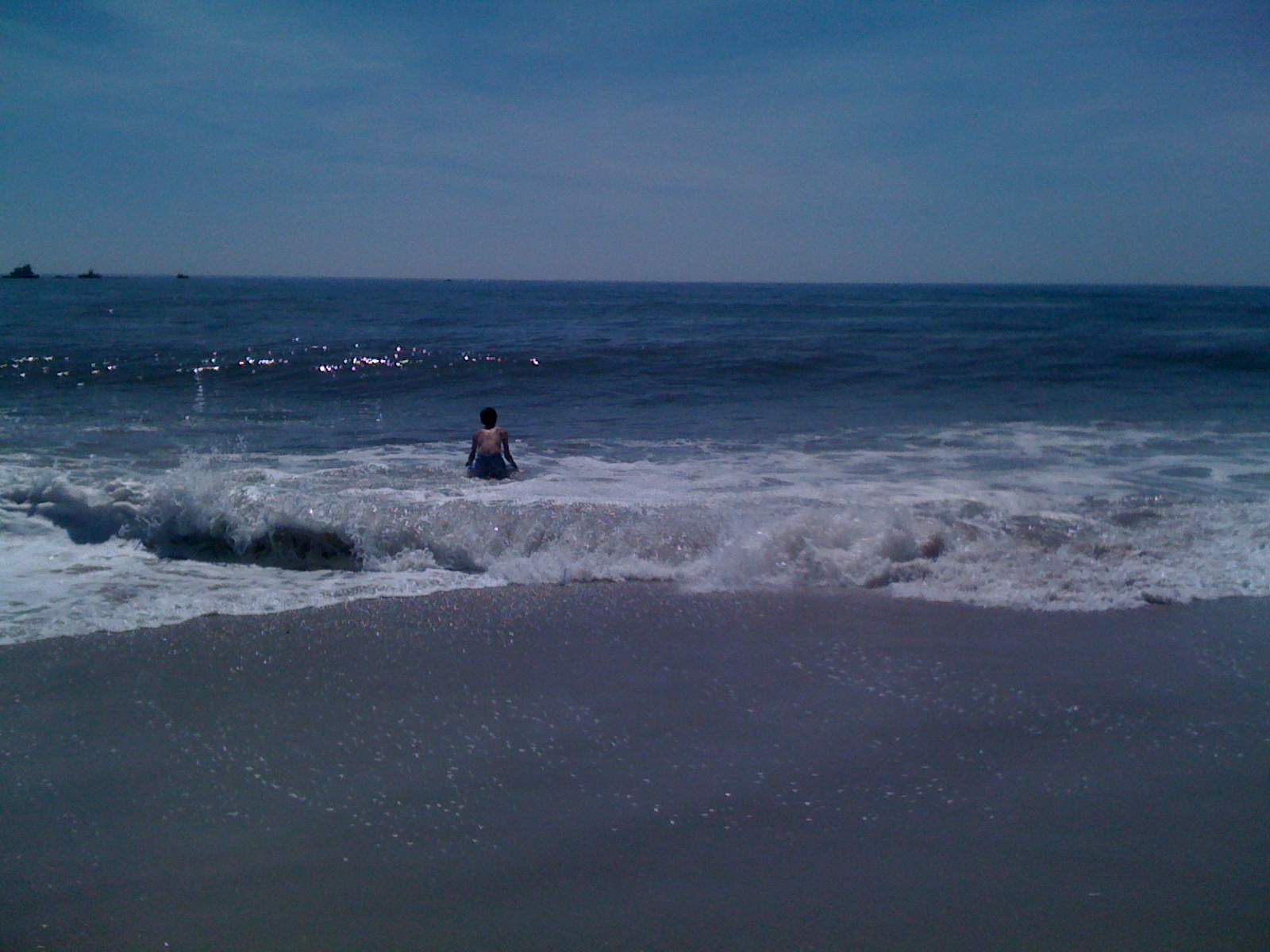 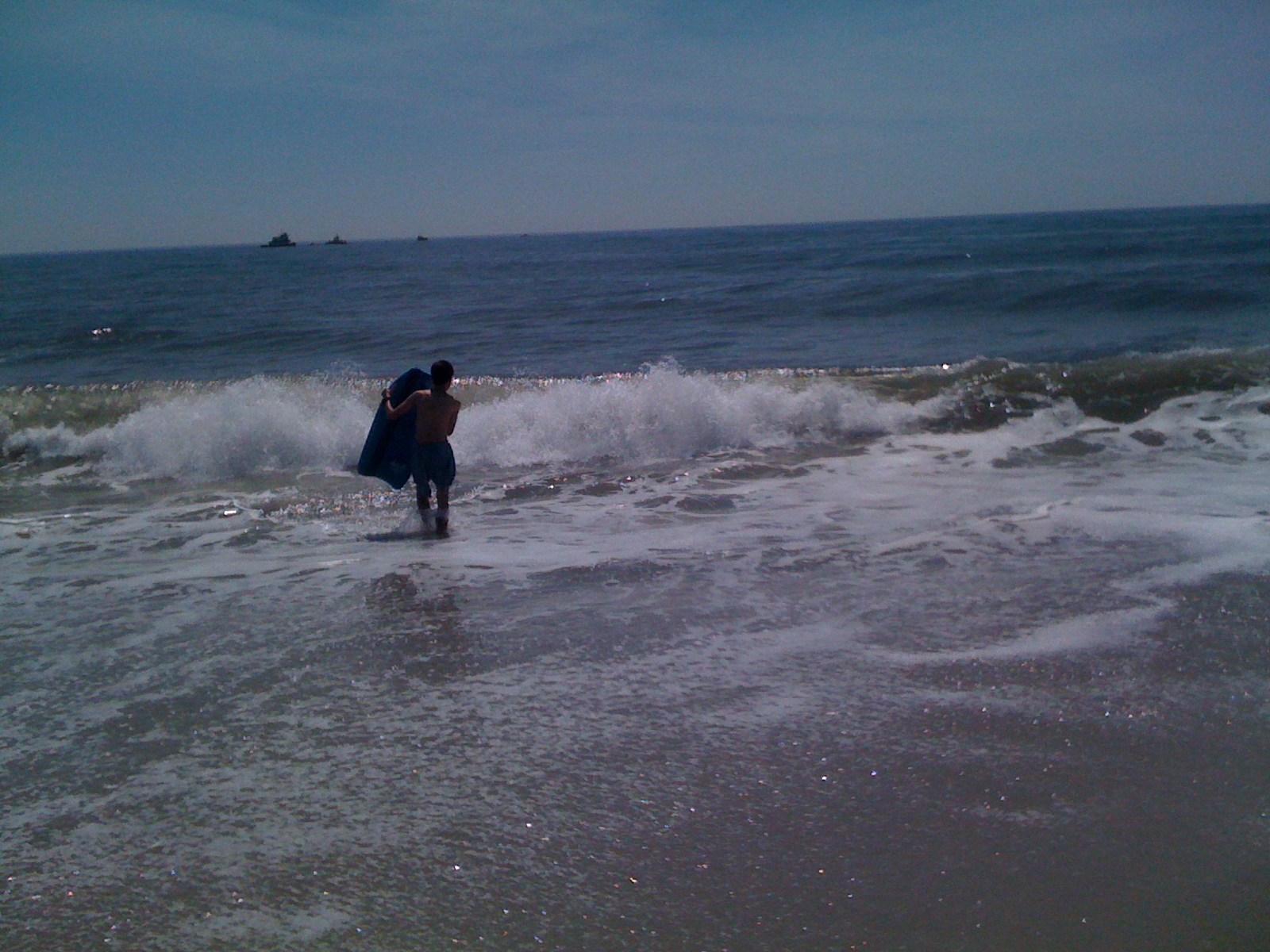 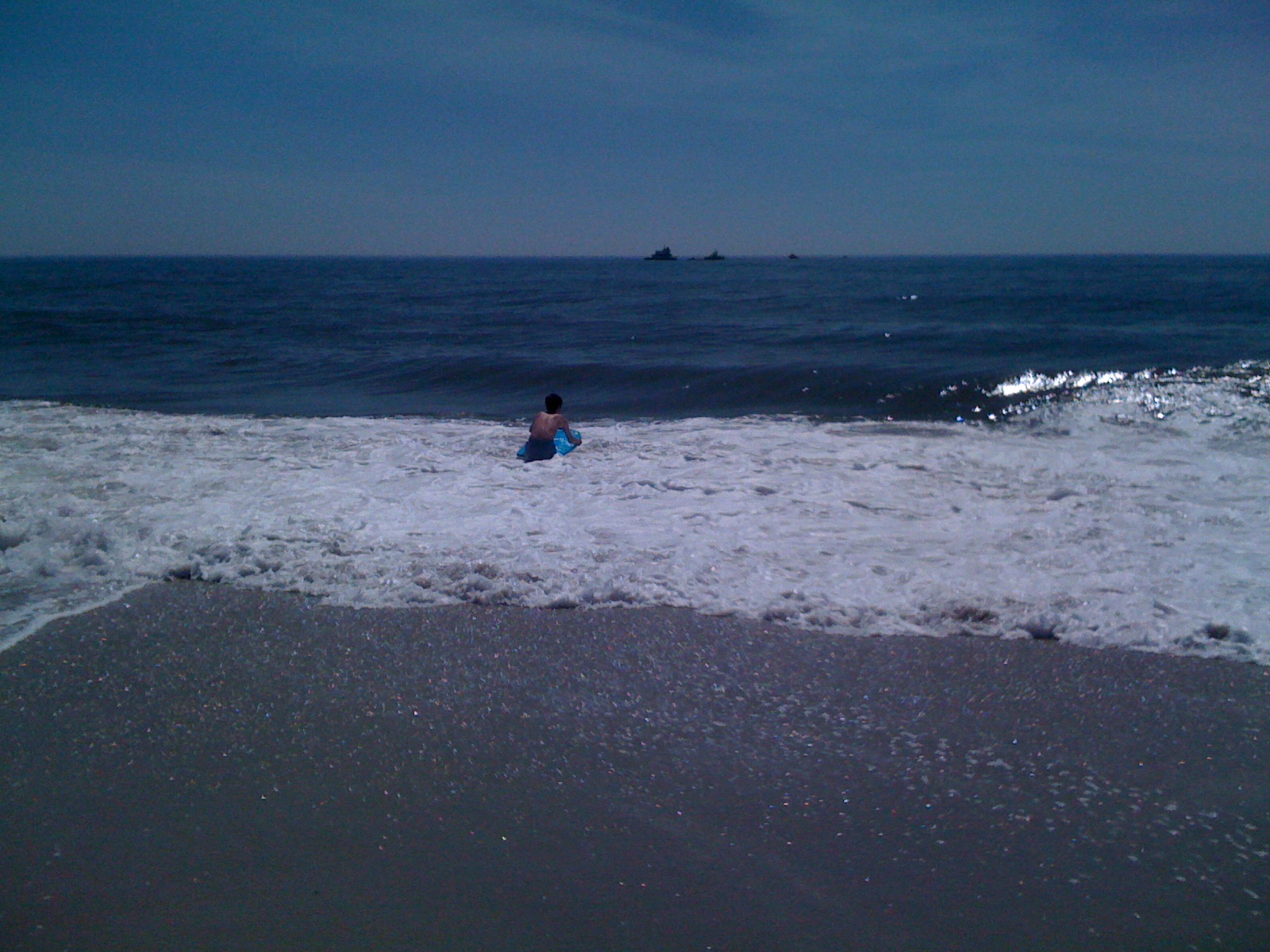 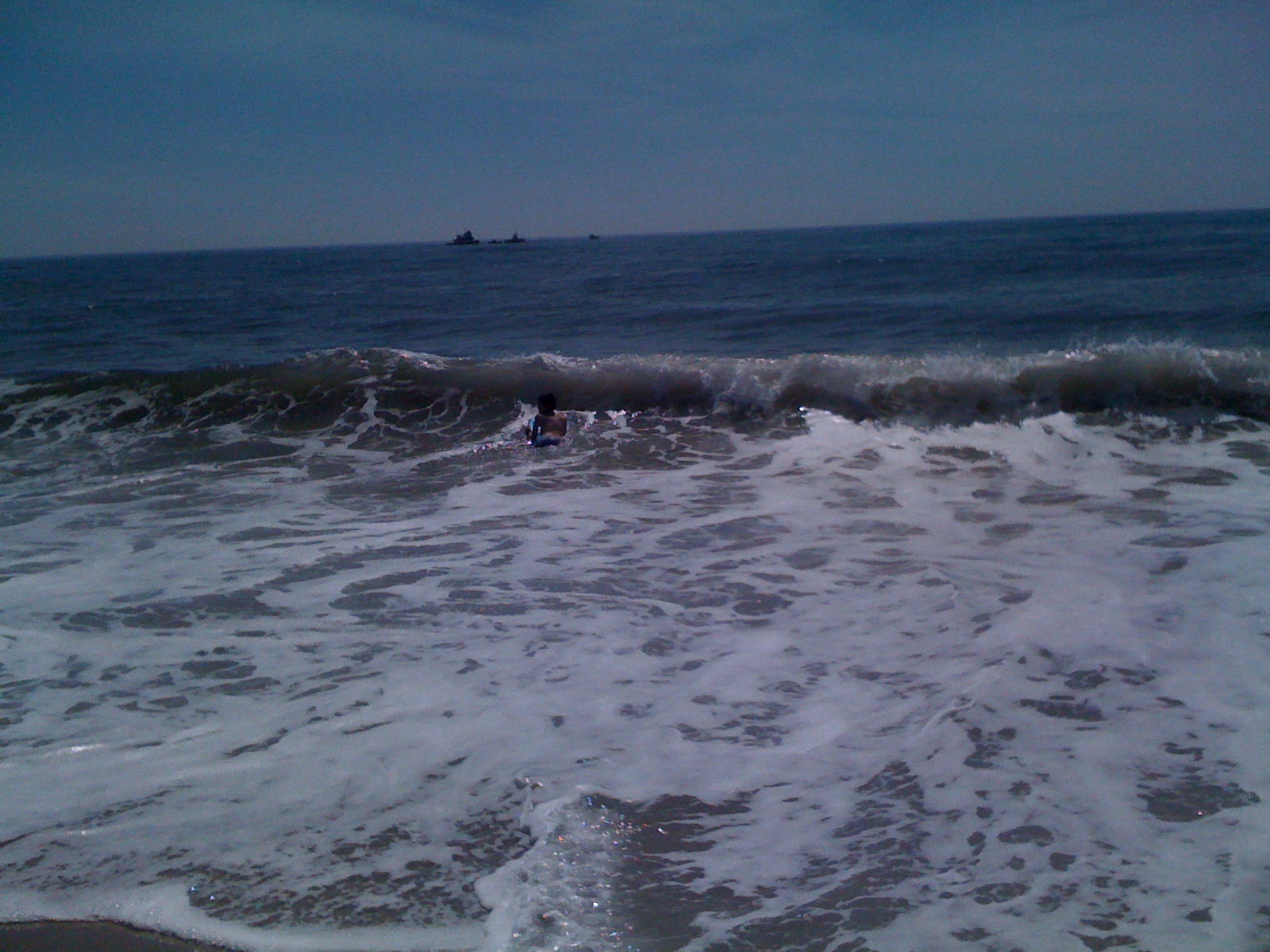 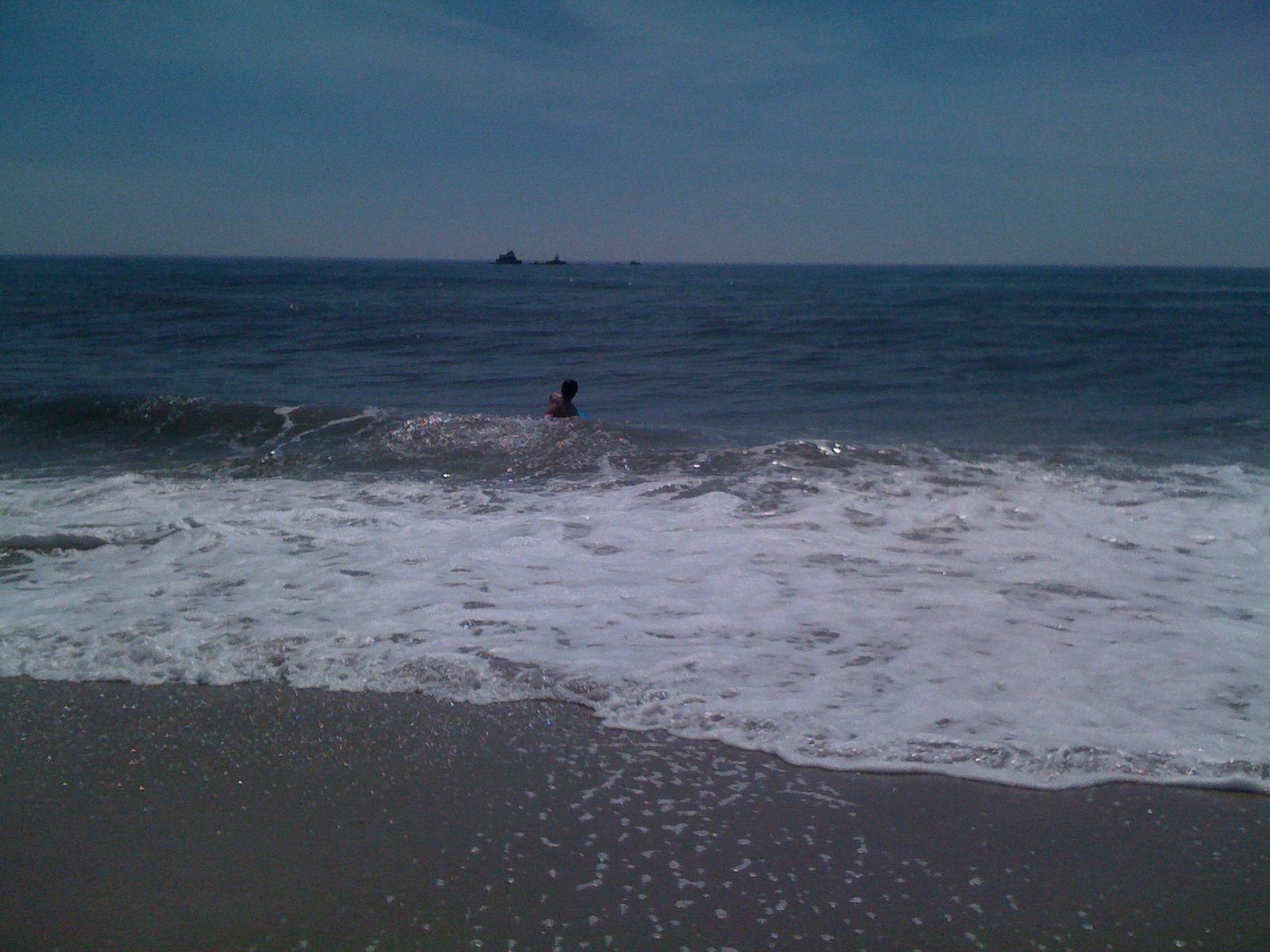 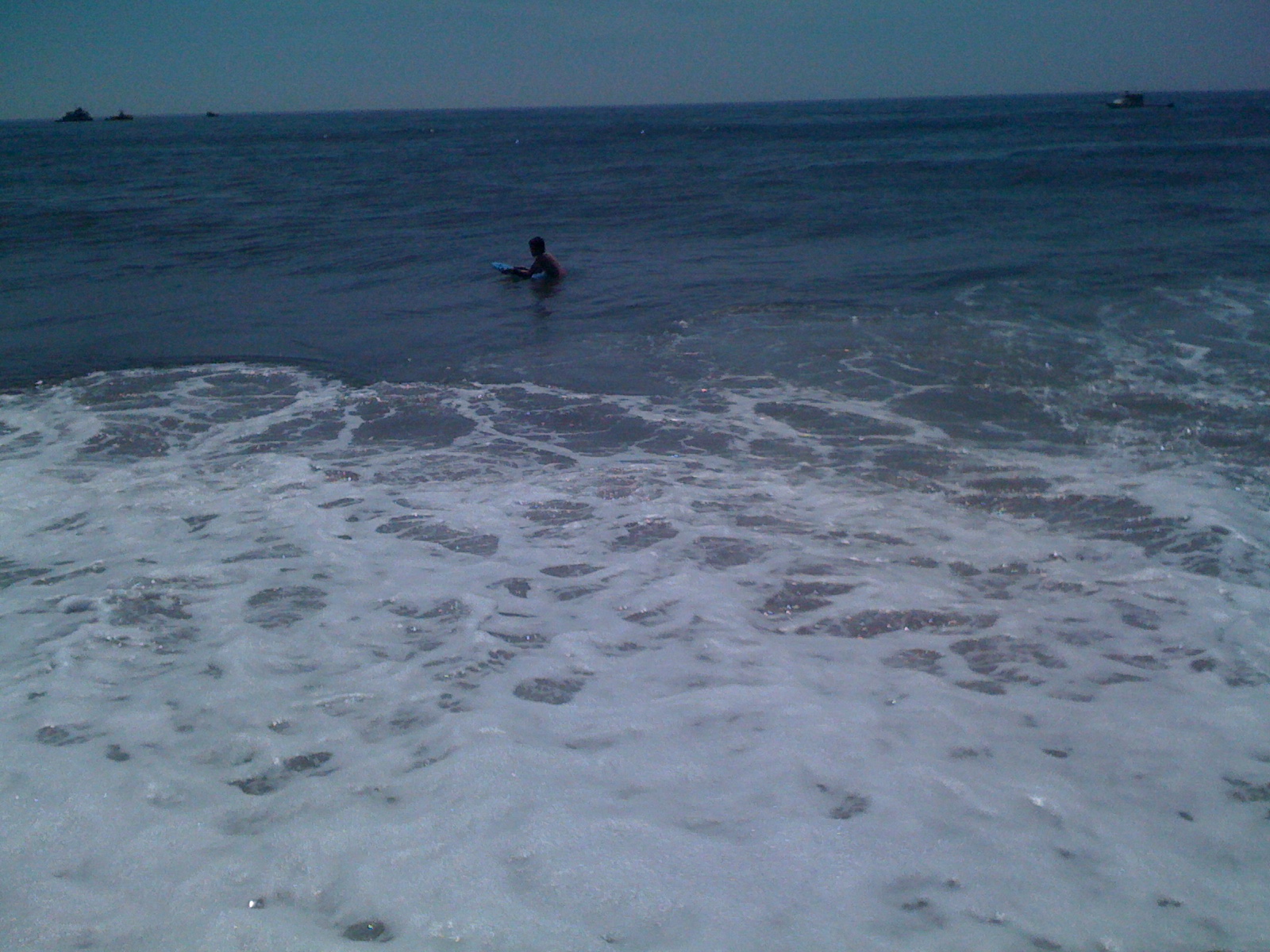 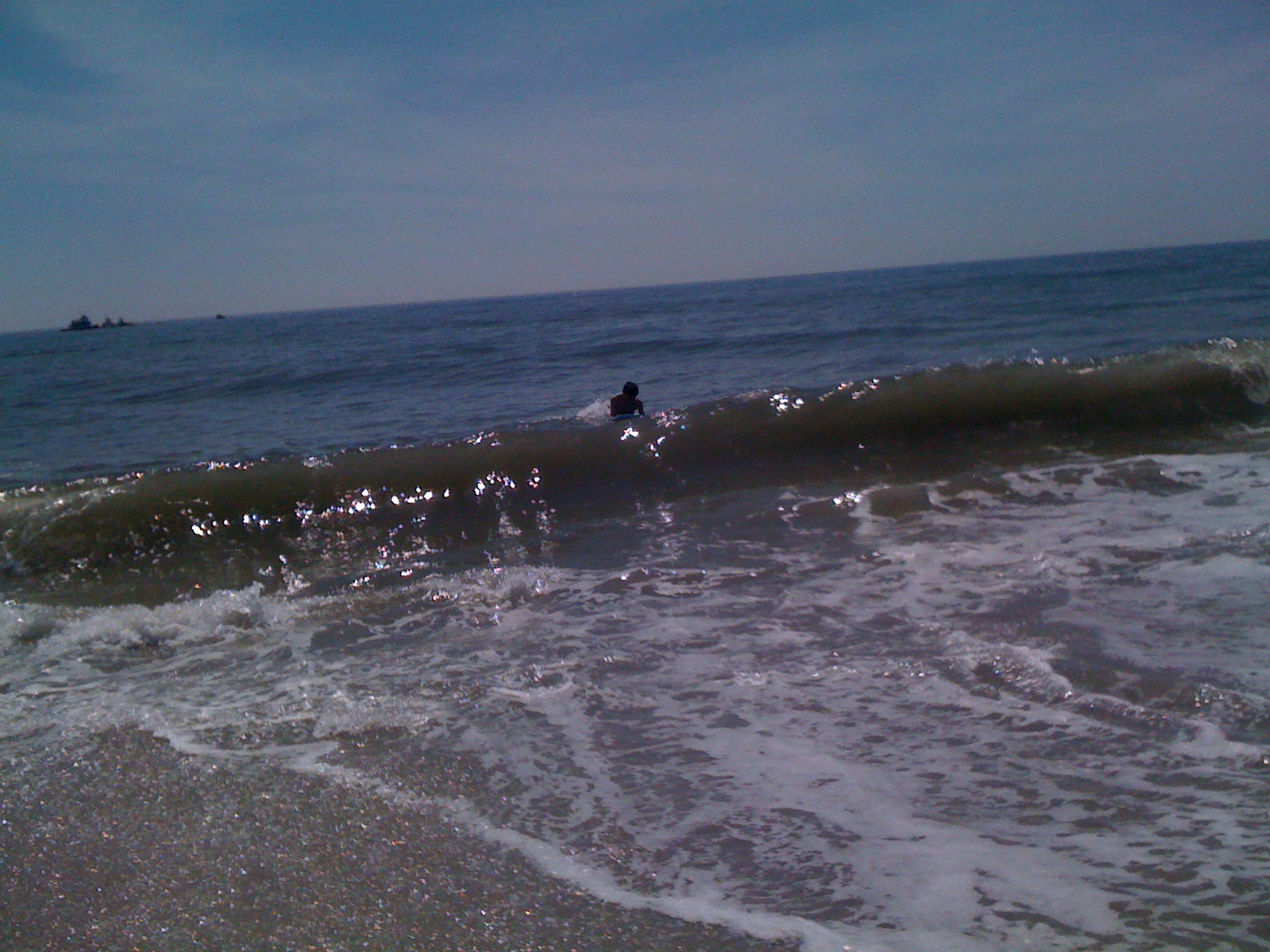 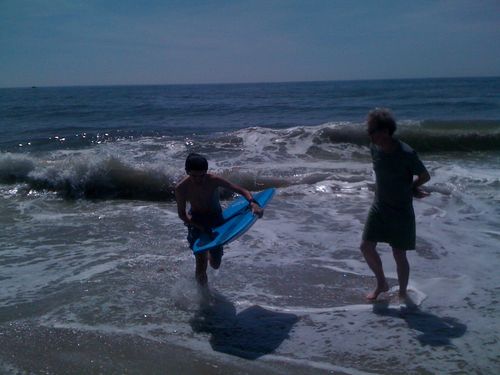 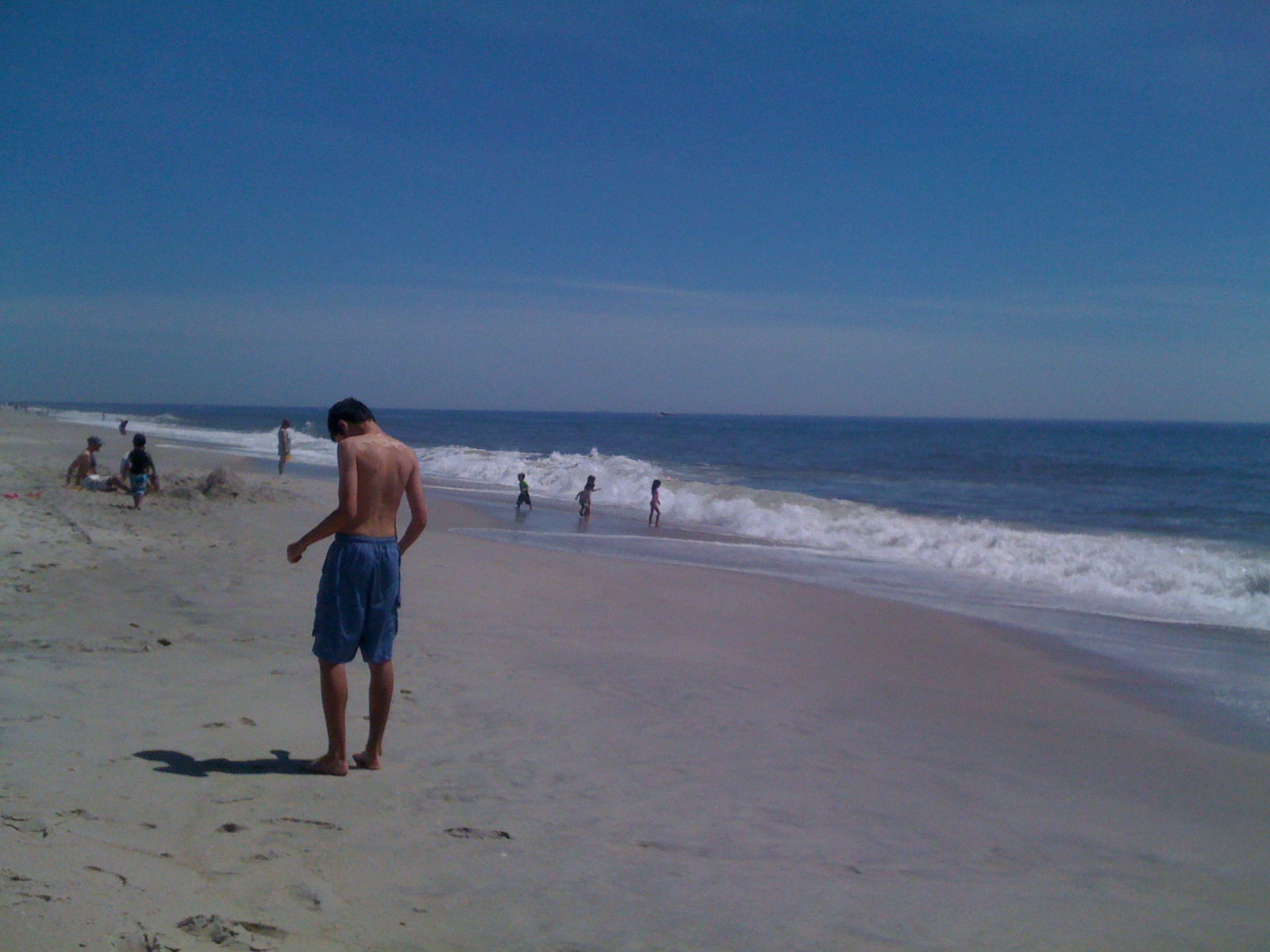 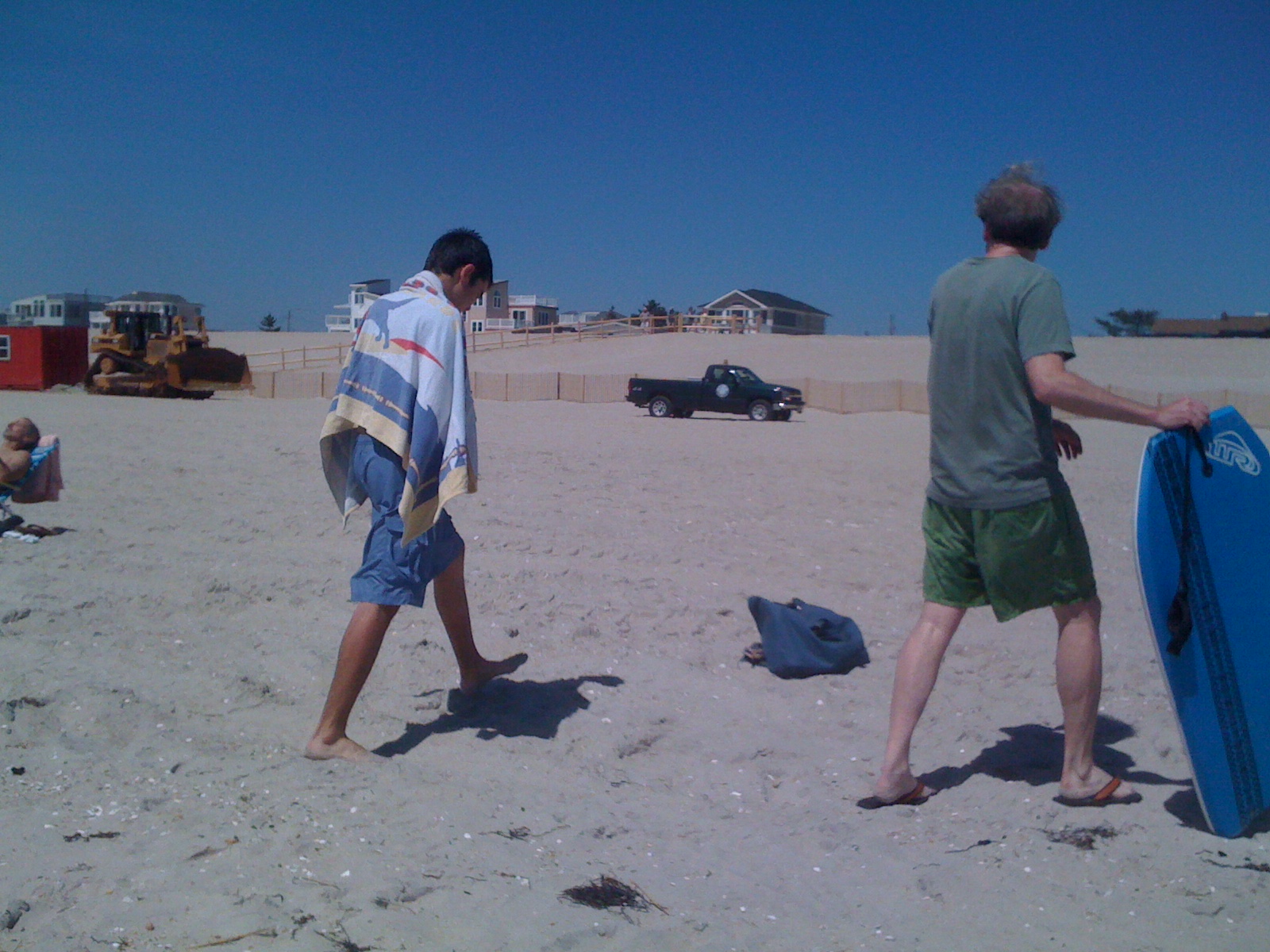 And maybe someday we'll see the firefighter again, and his son in the waves.

The passage of time always seems so strange, at the same time both so short and so long. We were up on the roof yesterday, Dimitri, preparing for the summer months, practicing his basket-ball skills, knocking the ball back to me one handed several times in a row. That was something that was out of the question a few years ago.

It would be nice if you got to meet the firefighter again.

Thats great that he was swimming all by himself, you had to be gleaming!

"You wait for moments like this even if they'll never come and then they do." This says it all for me, Kristina. Reading this and looking at the pictures...makes me hopeful that one day Nik & Charlie might be in that ocean together.

@Jersey Mother, we did Surfers Healing the year before last; thank you for the reminder to sign up again!

Your very welcome for the suggestion, we just found out about those events this year, and eager to try them all out! Are you attending the huge autism picnic with POAC.net?