Home Archives Profile Subscribe
Shared Memories Are Sweet, But Those Brand New Are Sweeter
A Farewell to Tragedy 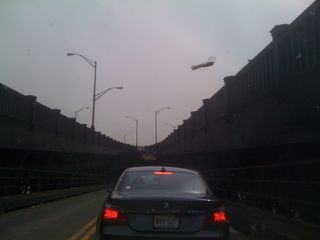 We started listening to the radio in the car after some in-car neurological storms of a quite---ok, an extremely---bad kind that were stoke, we were aghast to discover, by music.

Up the age of the five, Charlie was obsessed with cassette tapes, or rather with pulling out the tape of cassette tapes, and then watching Jim and me try to rewind the tape with a pen or pencil. Indeed, it gradually became apparent that seeing us (somewhat frantically and, too vexedly) trying to rewind the (sometimes broken) tape back up had become the reason for Charlie pulling out the tape in the first place. No tapes were exempt from Charlie's quick draw: Teachers used to joke that he could smell them as he was quick (as lightning) to run into any room and find the coveted plastic.

After efforts to teach Charlie to be in the presence of a cassette tape and not unwind it proved only partially successful, we consoled ourselves that at least he'd chosen a technology heading fast towards obsolescence to be so in thrall to (literally) pulling to pieces. We had switched to CDs anyways, but these,  being shiny colored circles---Charlie's always had a thing for shapes, for arranging them in patterns and then staring at these---had their own 'issues,' not to mention the problem of teaching not to touch, scuff, scratch, or otherwise damage the bottoms. We were never able to teach 'don't touch' and many frantic moments ensued when CDs skipped and a song (always the favorite one, right?) could no longer be heard. (Yes, I did try toothpaste.)

But the biggest problem we started to have with CDs stemmed precisely from the reason people listen to CDs, being able to hear the same songs and, too, even to hear the same song over and over, and over. Last summer and fall, Charlie commandeered the CD case in the car and, while he would first ask us to put different CDs into the CD player (often choosing by color, I suspect), he would gradually only choose two CDs. And then, only one.

And then he'd want us to 'turn on, turn on,' which meant turn the volume up as high as it would go.

Looking back, I realize this was all a total recipe for over-stimulation and I'm not surprised that Charlie had a major difficult moment in the car back in the fall. For a time we banished all CDs and certainly music from the car. Then Jim, who's always been a radio kind of guy, started turning on the classic rock and the jazz. The former was on a commercial station and we came to realize that Charlie was ok with some of the music and not happy at all with the endless commercials and promotions and chitchat---indeed, I can't stand these either. And so we came to listen to listener-supported public radio to hear jazz, blues, some R & B and, most of all, Phil Schaap.

I've never been into jazz or blues or, indeed, to listening much to the radio. Charlie clearly follow in Jim's footsteps; he's got a particular affinity not only for Bird Flight, Phil's morning show on WKCR, but for Phil himself, for Phil who often talks and talks about jazz history, how recordings are made, what one can hear on some recordings of very poor quality, and much, much, much more: Often I feel as if he's an archaeologist of jazz.

Even after I've dropped Charlie off from school, I often play my own CDs but keep Phil on. Monday morning Charlie and I learned about the jazz pianist Hank Jones who passed away on the 16th of May. On the way into work (and during a long stint in non-moving traffic on my exit off the Pulaski Skyway into Jersey City), I heard an amazing recording of Ella Fitzgerald singing 'A Tisket A Tasket' and 'How High the Moon" accompanied by Jones and Charlie Parker and many others at Carnegie Hall. Phil emphasized Hank Jones's musicianship and, in particular, his ability to accommodate the 'singer's prerogative': When Ella Fitzgerald said she was going to go 'up' and sing 'How High the Moon' in F instead of G (I think it was G), Jones seamlessly played as she sang, adjusting to playing the same tune in a different key on the spot.

And how else might one describe how Jim and I 'tailor' what we're playing, um, doing, to whatever key Charlie is singing in---to whatever Charlie's doing---be we biking (9 miles on Monday), beach-walking, round-the-neighborhood-walking (2 long walks, one with me and an evening one with Jim), adjusting life plans and doing our best to hit the notes in time, in tune, with Charlie?

For sure, he's the headline making soloist and Jim and me, his ever-ready willing accompanists. 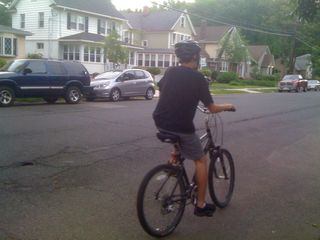 I like the analogy. I think adjusting and adapting are a natural part of life anyway, it may be that we do more so, but I'm OK with that. It's the working together to compliment one another, that makes good music.

I was just relocating the DVD's and Cd's in our house last night! We have gone from the tape-unraveling, to CD-coveting, and now to iPod press-the-music-icon-repeatedly. Have had to remove the 2 albums from the iPod for now.

I'm with emma on adjusting and adapting being part of life, and that seemingly more is required with a family member on a different trajectory.

I love listening to music while doing another task.

(on another topic - from twitter) You are most welcome, Kristina. (and the tinyurl for this post did not work for me this morning - might want to check it.)

When are you going to change your cover page to reflect that you are now the mother of a teenager? This milestone should be documented!

@thanks, Barbara! Sometimes something happens between me copying the tinyurl and what gets put up!

@bob's daughter, you're right, I should make that change---have some 'blogcleaning' and website cleaning to do---

Ah Phil Schaap, I have a love/hate relationship with him. Sometimes, I feel like I'm attending a free college course on 'Ancient Jazz' (you have to admit that you now have a better appreciation of Bee Bop); othere times, I think he is attempting to redefine incessant. I'm amazed that Charlie can stand some of that, although I have admit, he's a lot better than listening to 8 commercials for car dealerships!

My Jason has always been nicknamed Bird, BTW...bluejay was the inspiration; Mr Parker is the reason for the staying power. I wonder if Charlie gets a kick out of having a sax legend as a namesake...