The Ides of May

I'm going to go out on a limb and say that it was about as good a 13th birthday as there could be. 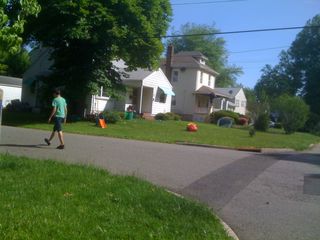 Jim took Charlie on a post-walk errand-running ride during which Charlie directed him to the entrance to the Garden State Parkway south and asked to go to the beach. Jim assured him we would go tomorrow (i.e. today) and Charlie was good with that.

Once home, he saw me driving up with three balloons (and, out of sight, the birthday cake) floating around the back of the black car. Charlie ran up to his bedroom and took a long late-morning nap.

Jim did some yard work--- 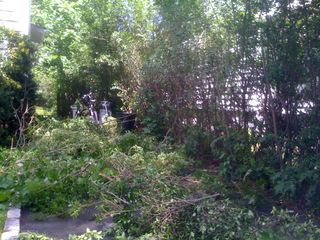 Soon as Charlie woke, he called for his bike helmet, and he and Jim went off on what became an epic bike ride as Jim got a flat front tire some distance from home. But the tire held out till he and Charlie were back in our front yard. (There must have been some magic........) 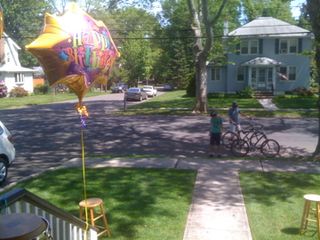 That would have been enough for one day but, of course, the party had yet to take place.

It went quite as planned: Within a half-hour of our guests arriving, Charlie asked to go on a walk, and off he went with Jim.

I am pretty sure that a good time was had by all. Charlie only sampled some of the frosting but we do have half the cake left. (I got a rather large one---had to make up for never having gotten him one before, you know.)

Returning from a night walkabout with Jim, Charlie started crying on the last block. He ran up the stairs in heavy-duty agitated fashion, took off his shoes, ran up the stairs, did several stomp-jumps in his room. He got into bed and, after some moaning sounds, said:

I ran up the stairs with a cup, which Charlie drank and then--handing back the cup---told me "Mom stairs." I could see his mouth twisting into a faint smile.

Shakespeare's Julius Caesar contains the line 'Beware the Ides of March,' the baleful 15th of the month which was the day, in 44 B.C., that Caesar was killed by Brutus. But based on our recent experience, I'd say there's no need to be so spooked by the Ides of May, certainly not this year, or ever after. 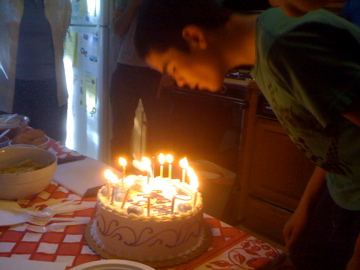 Also, in the Chinese way of counting, Charlie is 14----counting 13 years + 9 months in the womb---traditional Chinese counting of one's age is that you're one year old after one day.

You all definitely had a long week this week with lot of major events. I hope you will have a slower week this coming week (not counting walks and runnings with Charlie of course) for some needed rests.

I wish you to be healthy and celebrate Charlie's birthday next year as well-traditional Greek wishing.

It was a successful day for Charlie - even with how many house guests, in total?

How often does Charlie get guests in his house? And these people were all playing attention to him, wishing him happy returns, and saying "hi!" Then there was all the ceremony of cake, the singing, the blowing out of candles - does he do that every year? - that in itself gets an NT child as effervescent as a Willie Wonka Fuzzy Lifting Drink. Then unfamiliar tastes of the food, a sort of cake that Charlie has never had before. At least Charlie likes frosting!

It was a *wonderful* day, literally a day full of wonders.

And now you've got a beautiful beach day - sunny, clear, and not too humid of hot. Successful voyages to you all!

Such a glorious birthday! Full of things he likes to do and people he loves.

The pictures of the cake made me a little teary. I can relate to the getting a bigger cake to make up for all those years of NOT having one.

Happy, happy, HAPPY birthday to Charlie and to you and Jim.

Glad to know that bit of Chinese tradition! A strong acknowledgment of personhood prior to birth.

What a handsome boy! The candle-blowing-out picture is a keeper.

Happy birthday, Charlie! And my best to his parents too.

Cool shots!I love it...the cake is really cute!Belated Happy birthday to him...wish him all the best.