The sun shone down warm and constant on us during a 9am walk (especially on the part of the walk that involves walking across the very large parking lot of a drugstore and a gym, with nary a tree around). So we were caught (though not unpleasantly) by surprise when, a couple of hours later at the beach, we got so thoroughly wind-blown---- 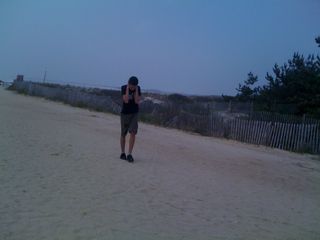 ---that we made an emergency purchase of new sweatshirts for Jim and Charlie. Jim chose them, because they have a fish design (I'm the only one in this household whose last name is Chew.......) on the front and also because they're green.

Since Charlie was persuaded to go sans winters, he hasn't been wanting to wear any jackets or sweatshirt, regardless of the temperature; for awhile (as you can see here) he kept wanting to wearing a pair of fleece gloves outside, but he stopped doing that some time last week (I'm not sure why; ok by us). So I was dubious about him donning his new sweatshirt, regardless of how cool it might be.

And then he pulled the sweatshirt right on and rather seemed to enjoy wearing it. 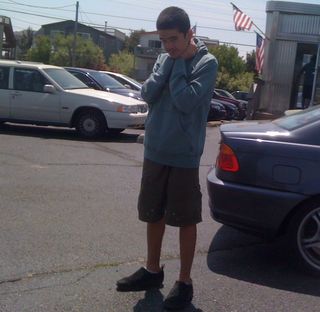 I'm taking Charlie's willingness to wear the sweatshirt as one more sign of how accommodating---flexible---he has been this past week, plus.  Without particularly trying to, we've been asking him to accommodate to our needs, such as waiting for a set period of time before going to the beach, so we could get some work matters done. He was been quite willing to do, without any sort of fuss.

I think the timer (on the iPod touch) has been helping a lot. It is (keeping in mind a comment from Regina) us who've been initiating use of the timer; something to work towards would be (just thinking as I type here) Charlie getting the timer on his own, setting it, and therefore being more in control of waiting; of knowing that he can be in control of waiting.

On the other hand, telling Charlie that we needed to go on a short walk rather than a long one as it was just before bedtime led to a very difficult half an hour of difficult things. (The steamy, muggy air---predicting a thunderstorm---did not help.) We got through it but it's always tough to have a peaceful weekend and then 'excitement' (I know, a euphemism) at the end.

I've been talking some with Charlie's teachers about varying the walks---the distances, the routes. I'm also thinking of using some visual cues (photos? arrows? lengths of time?) to help Charlie understand that 'sometimes we do this walk, sometimes that.'

Because really, the walks and bike rides and all the physical exercise we've been doing with Charlie have been immensely positive. He's clearly got a lot of energy and needs an outlet for it; we think he's been asking so much for walks because he's seeing a connection between physical exertion and self-regulation. The fact that Charlie's learned that there are things he can do to calm himself and not have full-out difficult 'neurological storms,' is a huge thing in and of itself and one to start building on.

You can see what we'll be working on teaching this week, and in weeks to come. 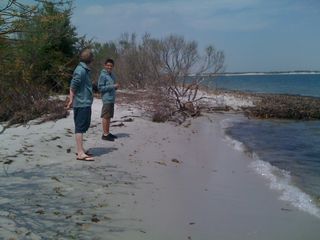 Several thoughts on this one, Kristina. Your detailed reports about his willingness to wear or not appropriate clothes - either at his own initiation or yours....the word 'maturation' comes to my mind before 'flexibility' but might just be the same meaning in this case. Awareness of temperature/comfort/discomfort is a sensory issue, I think. Then connected to the cognition of responding to newly-aware-sensations with appropriate clothing. (Those are just my cognitive connections.)

Looks like he is ready for lessons in changing-up routes.

I've never been comfortable with the concept of "a lot of energy and needs an outlet for it". This does not match my understanding of exercise physiology.

For most everyone, regular exercise results in conditioning that allows for increased endurance and strength - sometimes leading to a desire to exercise more. Could it be that he is seeking the same endorphin release that runners claim?

I do think that exercise promotes self-regulation and is the primary effective method attributed to all of the sensory techniques. The physiology of this is complex - too much for a comment.

I love that father-and-son-matching-sweatshirts photo.

I can relate.
We walk and while I can't speak for my daughter, without it I feel edgy and not quite right. If she doesn't exercise (bike, walk, swim) her behavior says "edgy". Perhaps the difference is for safety sake and a feeling of routine, we have particular times and for the swimming, days, which we talk about in relation to days, times and cues such as ambient light. Some things, such as start times "have" to happen just so, but others can be more approximate.

Self-regulation is positive, and I think about all the different things that people avail themselves of to do that - the difference being that there may be more access and knowledge of what is available to take the edge off. I can walk OR take a bubble bath OR mess with a hobby OR "talking it out" (and I can't imagine what that would be like without that to access)...my daughter may not be able to triage it across as many options, not because she can't, but because she might not know whether she can, or the potential options.

Flexibility is good, and may have some tie to maturation; there are some things we've systematically taught, but others we have not, but only kept an eye on, which show that my daughter can be more "chill" about things that in the not too recent past would have made her very unhappy. If she had continued to be unhappy or found it difficult, something more explicit might be helpful. We try to introduce new experiences stepwise and see how it goes. I have seen a couple of situations where the scheduling and structure has been too tightly bound and the result was almost a taught resemblance to OCD, so we've erred in the opposite direction but with enough structure to maintain general predictability. YMMV.

I don't know if you've been counting to see what's correlated or attributable to what, but from your description it sure sounds like even with the occasional blowup that overall Charlie seems more settled and happier than even a year or 6 months ago. Would you say so?

@Regina, it does seem from the daily testimony that Charlie is happier and remains calmer.

I also wonder if it is the new school environment that is helping him. He is in a larger classroom, with more students, in a bigger school with different teachers who know how to work with him.

Perhaps the intellectual stimulation is causing a corresponding pressure for physical exercise. Aerobic exercise is a necessity for neurogenesis, the growth of new neurons. Aristotle wasn't a Peripatetic for nothing.

It would be a real victory for Charlie to have some kind of aerobic exercise that he could do himself, without adult supervision. That would give him control over even more self-regulation.

After a long day of teaching, teaching, talking, and more talking (and a good deal of listening), a long walk with Charlie was indeed self-regulating---for both of us!

@TC, I'm wishing it might get colder again so I could take a few more dad 'n' son in sweatshirt shots.....