Home Archives Profile Subscribe
Much To Talk About: Date #2
Solo 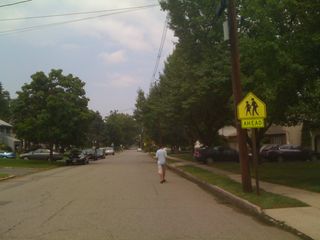 Saturday wasn't a day of rest but we did remain pretty much around our house, walking morning (6.30am), noonish, and night (/evening) with a mid-morning bike ride thrown in for good measure and some bouts of computer-using and car-sitting, once with a container of vanilla Soy Delicious 'soy cream' and both times with Charlie himself reminding me, 'Timer.'

(Once a parent starts translating a little Virgil or doing other writing work, or scrubbing stickiness off the kitchen cabinets, she can lose track of the time.)

After sit-in-car #2, we decided to go for a car ride. We started driving towards one of the streets that we've been walking every day on our walks, under a railroad trestle and ended up just missing a green arrow to make a left at a very major, and very congested (and hot due to so many cars and trucks idling) intersection.

We couldn't figure where exactly to go. Charlie was probably hoping the beach but the plan was to do that Sunday (i.e. today)---and I said, what about Weehawken, where Jim had give a talk at the library last week.

First Jim thought we'd stop in Hoboken which we did after a stop at an Exxon 'Tiger Stop' where Jim observed that we no longer have to worry about losing Charlie as his head is visible above all the aisles of packaged products. (Not mine, as I demonstrated by ducking behind shelves of Doritos in various flavors, Lays's, and Funyuns.) Charlie selected a diet Mountain Dew which he actually doesn't like but persuading him not to take it was not worth it (i.e., it was a parental 'choose your battle' moment). He then found a red box of brownie mix just like the mix that got us into major-o trouble at a local grocery store a couple months ago. We said 'sure, fine' again as the likelihood of us returning to that Tiger Stop is low and the point of the whole excursion wasn't to battle about brownie boxes (or neon green diet sodas).

The point was to check out some Jersey sites.

I don't know why all those people are lined up to get into Carlos Bake Shop (maybe because it's the home of 'Cake Boss'?) in Hoboken but there was a limo parked in front behind that black car. 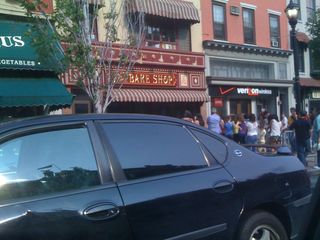 We nabbed a parking place a block away from the Hoboken waterfront. Here's Jim and Charlie walking in the shadow of the glamorous W hotel. 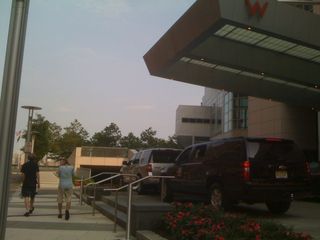 (You can tell who're the real Beautiful People are in the photo, ob-viously.) 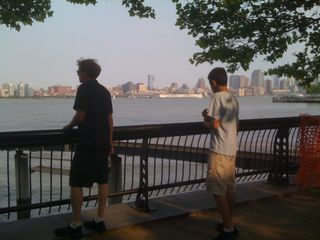 Jim wanted to check out progress on a playground that is being built on Pier C, once the site of various waterfront 'incidents.'

As you can see, some work remains to be done in regard to accessing the playground. 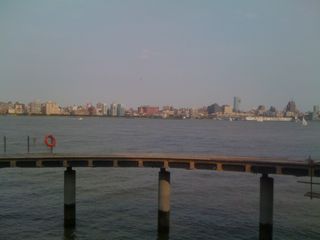 Charlie didn't want to walk around too much (we'd already walked quite a bit---understatement) so we got back in the white car. We drove north to Weehawken, which is up on the palisades, right across from midtown Manhattan, and up the river from Jersey City (whose smaller but rising skyline appears on the right.) 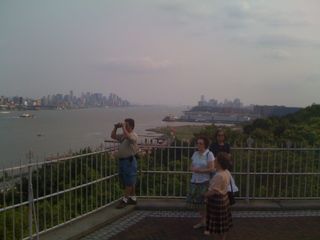 Other people were making the most of the view too. 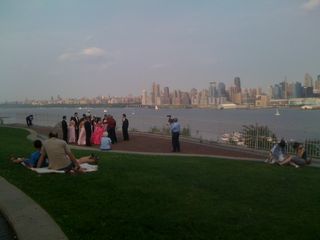 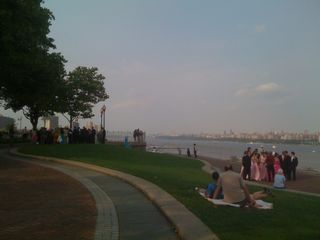 (These were just two of the bridal parties we saw.) 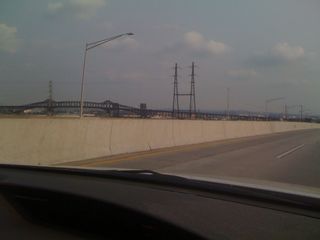