Talking About Death and Dying to a Child on the Spectrum 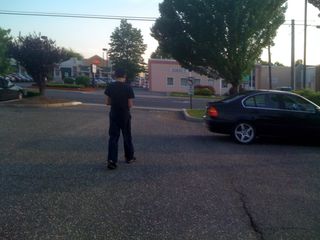 Thursday afternoon was the wake for Charlie's grandmother, Grace. Jim and I hadn't been sure about Charlie going. The funeral home is in the town where Jim's parents had lived for over thirty years (and where we lived for three years---one with them--from June 2006 to November of 2009); the Big Autism Center that Charlie attends is in the very next town over. We had concluded that taking Charlie out of school on Friday (i.e., today) for his grandmother's funeral wouldn't be the best for all parties but the wake being after school hours, and very nearby, we thought it might be worth a try.

And then the brilliant (well, not really, but after you've gone around in circles as much as we do to figure things out, it can feel like that) idea occurred to us: Why not bring Charlie to the funeral home and give him the option?

As far as how much Charlie may or may not understand what's going on---Jim and I have taken our standard approach, which is to 'presume competence' and explain to him that Grandma has passed on, and that there's something called a 'wake' and something called a 'funeral' to go to. We stick to straightforward language and keep the tone even.

It's impossible to know how much about 'death and dying' Charlie grasps, given his limited language and communication. Charlie having lived no more than 45 minutes away from Jim's parents for the past nine years (since June of 2001) and, indeed, Charlie having lived with his grandparents in their house for over a year, he has---to an extent more than his four first cousins---gotten to know his grandparents quite well. Too---sadly---he's also seen the changes in their physical appearance, through all these regular interactions. Certainly he must have been very aware of the changes in Jim's mother. Charlie was a regular witness to his grandmother's declining health, to how, over the years of Charlie's young life, she went from being a small, plump woman sitting in her chair in the kitchen (or in the living room) to one far tinier, lying day after day in a bed in a room in a nursing home with the lights set at low.

Further, since we did live in the town where the wake and funeral will be held for three years---the final 1 1/2 of which were very difficult ones for Charlie in school, culminating with the school district talking about a 'temporary residential placement' for him---Charlie has a lot of memories associated with it. Indeed, while we were living with my in-laws, he and I used to walk by the funeral home.

So after I picked up Charlie from school on Thursday (and after we made a run to a convenience store for post-school snacks---I knew going to the funeral home would be certainly new and therefore challenging for Charlie, so best to do this well-fortified), we drove to the (smallish) middle of the town and into the (large-ish) parking lot of the funeral home. Charlie sat munching crackers as Jim came out.

I had gone to the wake when it started at 2pm. While the funeral home looked quite big on the outside, inside one went down a narrow hall and thence into the room where Jim's mother was (in a closed coffin---apparently, she had, as a girl, become very upset at a wake on seeing someone in an open coffin, and had requested that hers be so). I had that narrow corridor leading to an uncertain outcome on my mind on thinking about how Charlie might fare. I kept recalling one of the passages in Temple Grandin's books in which she describes the various livestock facilities she has designed, and how, for cattle, not being able to see where they're going allays their fears. It's the opposite for Charlie, who seems quite at peace making his way over a large field; a huge open space, and becomes decidedly squirrelly in a small one with curves and crooked turnings. Where might he think he was going, walking down that hall, to see Grandma who had 'passed on'?

Jim noted, too, that more people had come to the wake and the room was crowded and full of the sounds of talking; we both agreed, maybe it wouldn't be the best for Charlie. He sat in the car and then crept out cautiously. Friends and relatives who had stepped out of the funeral home came over to say hi to Charlie, who, after standing by the car and looking warily around, went back into the car. He was ok with us opening the door from time to time so he could say 'hi' to his great uncle, an uncle's brother, a friend of Jim's. But inside the car he stayed and, the more people who came out--many of whom Charlie recognized from past holidays and family gathers---the more Jim and I realized that it wasn't just all the people and noise and such that a lot for Charlie, but seeing so many people with whom he had, in some cases, strong emotional memories.

We hung around talking for another 20 minutes, Charlie waiting quietly in the car. Jim stayed while Charlie and I drove home.

Which having reached, Charlie, without fail, requested a walk, and suited up in his sweatshirt and gloves. Thursday the temperature had started to become more-May-like again, and I for one got quite warm quite fast as he and I walked. After fifteen minutes I asked Charlie about maybe taking off his sweatshirt (which has a hood, which Charlie had it on) and gloves and got an adamant NO.

Ten minutes later, Charlie stopped and shot me a glance. 'Sweatshirt,' he said. 'Yeh," I said. 'Sweatshirt,' Charlie repeated. And then 'sweatshirt off'---and he pulled it over his head, handed it to me, and we kept walking (he still with his gloves).

The rest of the walk (and another that we took a bit later, though this latter walk was more of a run because Charlie seemed raring to train for the races) was very pleasant and (I'm sure) Charlie was much more comfortable, disencumbered of his sweatshirt which I---feeling very pleased at his displays of flexibility---was (but of course) carrying.

'presume competence' is brilliant. Good parenting throughout much of childhood. Explaining to the level of the child can be challenging, but worth an attempt at presumption.

thank you Barbara---I was glad we let Charlie choose what to do, especially as wakes and the funerals are events that no one finds easy to be at....

Sounds like you made the right decision (as far as the wake). I would consider using the word "died", instead of the euphemism "passed on", though. He deserves to know exactly what happened, and using euphemisms often tends to cloud effective communication (for all of us).